Modern Anti-Warfare
Preparing for the next one 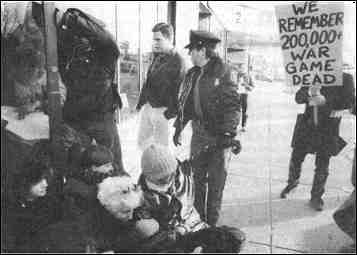 Women In Unity Against War blockaded the entrance to the Royal Oak, MI Armed Forces recruiting station for several hours, Jan. 29. Their flyer asked people to “disregard divisive boundaries imposed by empires that wage war.” The demo came in response to the Iraq bombing. Photo/Amy Morgan

War is inevitable. Since April, 1991 and the end of the Gulf War, we’ve witnessed George Bush and Saddam Hussein engaged in a quite deadly game of chicken, with Hussein often blinking but sometimes not fast enough. In addition, US Marines now occupy the strategic Horn of Africa, giving the Somalian’s bullets as well as bread as they try and “keep the peace” (a Pax Americana); yet another Bush “New World Order” legacy.

Make no mistake however, war is the health of the state, and the occasional war is built into the processes of our imperial economy. The Democrats won’t be any different. Look at history; prior to Reagan’s regime most wars were started, or entered into by Democratic presidents. Clinton looks to be just as “humanitarian” in Somalia and as “tough on Saddam” as was Bush, plus he has his own agenda in the Balkans.

War is not just inevitable, when it comes it will be thoroughly modern as well. Leave it to the United States government to perfect the Nazi blitzkrieg. The US military was at war with Grenada and Panama before the people of this country were notified of these imperial adventures, and only the lightning war against Iraq was preceded by a relatively long period of deployment, build-up and Guernica-style air war. The purpose of such “total war” is to make US military adventures palatable to the people of this country. The mounting opposition in the streets against US military buildup and air war in the Gulf was smartly turned about when US troops came under fire, a surge of patriotic sentiment that the quick, hi-tech success of the ground war cemented into a yellow ribbon frenzy. Virtually every US military intervention has found support from the American public initially, if for no other reason than from sympathy and support for “our troops.” The longer the war, the higher the casualty count, the greater the setbacks, and its popularity rapidly evaporates. The powers-that-be have learned well from Vietnam.

What’s more, the mainstream US “progressive” community in general, and the established US peace movement in particular did their best to control, constrict and channel the visceral, countrywide anti-war outrage that boiled up against the US government buildup and air war in the Gulf, not just in “the provinces” but also in the nation’s “centers of political ferment.”

Suffering an identity crisis with the collapse of socialism in eastern Europe (a crisis that the Soviet Union’s subsequent demise has only intensified), “progressives” are desperately clinging to the issues they have monopolized, the institutions they have created, and the constituencies they have cultivated. The peace movement’s proprietary attitude toward “peace” during the Gulf War was an important obstacle to fully realizing the radical potential in the anti-war upsurge prior to the ground war.

People who understand that war is inevitable, who grasp that any such war will be motivated by statist arrogance and imperialist ambition, and who are determined to resist the coming war will need to act fast—on a moment’s notice—and perhaps despite the cautious, foot-dragging of mainstream “progressive- and peace organizations. We will have to prepare now for “emergency response,” independent actions that go beyond the staid day-of/day-after demo-down-at-the-Federal-Building called by the lowest-common-denominator “progressive” coalition. Begin by getting together a circle of friends—your crew, your team, your posse, whatever—and sitting down to plan what you want to do. Find like minded people you know who you can depend on and trust, and whose capabilities and limits you understand. You will probably have to act with speed and with a high degree of coordination, so its best to do some collective thinking and common practice ahead of time.

Familiarize yourselves with each other’s reasons for needing to act against the threat of war, and commit to acting together as a group. Prepare to back each other up and start to do small things together to check out the group dynamics, before matters get critical.

Pick your target, based on your own experience and research. It’s not hard to notice the centers of daily activity and to ferret out war complicity in your community. The choice of key geographies, as well as of complicit businesses, universities, “civic” organizations, and government agencies should be broad. Use this time, this lull before the storm, to check out and “case” what you intend to hit.

Pick your tactics with your target in mind, within the commonly known broader strategies for social change. Protest is getting your point across. Spray painted messages, wheat-pasted posters, impossibly strung banners, quick spray painted murals, rush hour hit-and-run street art and guerrilla theater are all effective methods of protest, to name but a few. Direct action is acting directly to try and make a change, in this case grinding the war machine to a halt. Urban monkey-wrenching might be a better term; with non-violent sit-ins and blockades (both stationary and roving), chaining doors and gluing locks, strategic corporate and government property destruction, road and freeway obstruction just a few of the tactics that might be described as direct action.

Publicly refusing to be called up for the military reserves, to be deployed as an active duty soldier, to pay war taxes, to register for the draft, to do war manufacturing or research list only some of the ways of resisting the powers-that-be. Resistance means withdrawing support entirely, bodily from the war machine. Squatting a vacant downtown building to convert it into a sanctuary for resisters and deserters, occupying a school building to hold a thorough, radical teach-in against the war, seizing a vacant lot to construct a community peace park again are only some of the possibilities in a strategy of takeover; takeover being the transformation of the shell of the old society into the contents of a new one.

Don’t wait for permission, and don’t wait for instructions. Think out the possibilities: What if the war is a reality when you wake up? When you go to lunch? When you sit down to watch your favorite TV show? What are your alternatives when your first target is unavailable or your first tactic proves impractical? Establish your contact trees, your rendezvous points, your staging times, your legal backup, whatever else you think necessary to get the job done. Then, when the war comes, take action

This is nothing less than a popularly based, broadly aimed, rapid emergency response to US military intervention abroad that maximizes creative action and self-activity from the base. A mass uprising, as opposed to the generic “mass actions” conventionally organized by established peace and “progressive” organizations. Not to say that you should not join in on the protest rally at the downtown Federal building orchestrated by that proper, broad coalition of minimally unified “progressive” forces after you carry off your own action; only that you think about adapting contingencies for those conditions as well.

During the Gulf War before the ground war, try as they might, mainstream US peace and “progressive” organizations could not keep people from taking to the streets in sometimes planned and often spontaneous actions, even outside the country’s traditional areas of political activism. And while the conventional demonstrations by the conventional Left allow the general public to “petition the Government for a redress of grievances,” useful as such, the preparation you’ve done to pull off your own, independent action is ideal for acting independently in the streets, when people’s outrage steps en mass outside the bounds set by the “peace monitors” at the “official” peace movement’s demonstration, march or rally. Key to working out such contingencies involves developing street smarts, mobility, flexibility, and anonymity.

So far, it has been assumed that the coming war will be a Grenada, a Panama, bombing raids over Libya or Iraq; in other words military engagement before the American people are even made aware that a war is in progress. Given another Gulf-style war, where the government gives us a little time before putting US troops under direct fire, contingencies can be made to expand independent actions and acting independently in the streets. A campaign of steadily escalating tactics, strategies and outrage can be planned to parallel the war’s escalation from deployment through technological air war overkill to a lightning ground war, or however it plays out the next time around.

What’s more, such a period of buildup will unfold the actions of other groupings. Contacts can be made, actions can be coordinated, and a radical, autonomous anti-war movement might be sustained against the onslaught of popular patriotism and government repression, once the ground war has begun. If the military has miscalculated, if the “enemy” is not immediately defeated, if the US government is faced with a protracted war, then such a movement can expand its influence and the scope of its actions dramatically.

As generals have often been accused of fighting the last war when engaged in the current one, so too the mainstream peace and “progressive” movements can be criticized for protesting the last war in confronting the current one. They’re still protesting Vietnam, while the government has learned its lessons from southeast Asia in perfecting quick and total war to minimize public opposition to US military intervention.

Now, we must learn the lessons of the Gulf war by developing a lightning response to the beginning of US military involvement; a rapid emergency response that offers the broadest, swiftest, most creative and most independent opposition from the base, that is, from the population at large. We may not be able to halt the war-to-come once it starts, but we need to make it as costly as possible as quickly as possible for the US to conduct any such war.

American military blitzkrieg means we’ll have to make our immediate actions count, while preserving the option of expanding our independent actions, first into acting independently in the streets, and then into an autonomous anti-war movement. In this way, we can give the government second thoughts about starting a war, even while we cannot completely prevent the war-to-come.

We would need to radically restructure US society to make war no longer inevitable. A movement capable of this could emerge from a prolonged war, but to build such a movement outside the context of a war is another matter. One better taken up at another time.