The Assault on the Pentagon
The 1967 March 25 Years Later

October 21, 1992 marked 25 years ago that a huge anti-war demonstration swept past the Lincoln Memorial in Washington, D.C. and over the bridges into Virginia, wave after wave of young anti-warriors crashing against the walls of the Pentagon. 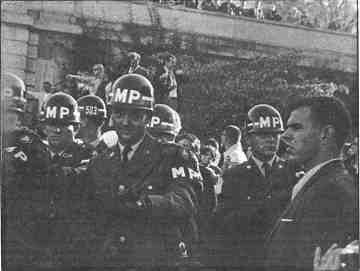 GIs blocking entrance to the Pentagon, Oct. 21, 1967. Some demonstrators tried to levitate the structure while others put flowers in the soldier’s gun barrels. FE photo/Frank H. Joyce

This was the first militant anti-war demonstration on the East Coast. One hundred thousand people carrying signs depicting their town’s, their union’s, their church’s, their campus’ opposition to the war against Vietnam, inched up to a line of soldiers standing shoulder to shoulder guarding the nerve center of the U.S. war machine. They were pointing their rifles directly at us, their unsheathed bayonets glinting like a thousand points of fright in the afternoon’ sun.

I still have the shirt I wore that day as an 18-year-old junior from the State University of New York at Stony Brook. An orange-striped pullover with the hole in the chest, where I’d pressed up as far as I could against one soldier’s bayonet. He didn’t budge; I backed off.

A quarter of a century ago, and I remember it as vividly as yesterday! The man carrying the home-made sign, saying: “Lyndon Johnson pull out, like your father should have.” The chants, “Hey, hey, LBJ, how many kids did you kill today?” The young woman who, in a moment of inspired artistry, began dancing up and down the lines of soldiers, as thousands of voices sang “join us,” inserting flowers into the rifles. Soon, a dozen people joined her, and the East Coast version of “Flower Power” was born.

Suddenly, around one side of the building—at the time the biggest edifice complex in the world—ropes were affixed to a parapet overlooking a set of huge doors. Hundreds began climbing them, beyond the soldiers’ reach, to join a sit-in that blocked the entrance and that was to last for three days. I didn’t have time to remember that in high school gym my ability to climb ropes was nonexistent. I had already managed to yank myself up a few yards when I felt a hand grab one of my legs. I panicked, and tried to kick away without losing my grip, but the hand wouldn’t let go.

“Uh-oh, this is it, I’m going to get arrested,” I thought, my first arrest. Finally, in panic, I looked down; there was my father yanking me back, and my mother screaming: “Where do you think you’re going?”

“How did you get here? What are you doing here? How did you find me in this huge crowd? I’ve gotta join my friends...sit-in...all my friends are up there.”

Indeed, my friends from Stony Brook Students for a Democratic Society (SDS) were already up on the ledge. Even a professor from Stony Brook, Mike Zweig, was sitting-in. “You have to let me go. I helped organize the buses!” I shouted, as if that compelling point would clinch the argument.

“You’re exhausted, come on down.”

“So?” So I was racing around on an adrenaline high having not slept in three days. SDS and the “Organization for Progressive Thought” had been selling bus tickets around the clock door-to-door in the dormitories, cafeterias and TV lounges at Stony Brook. My younger brother Robert and I were among a handful who were responsible for selling the tickets, making all the bus arrangements and worrying that the bus drivers would leave us stranded somewhere en route because they hated our politics.

We would end up bringing seven busloads of protesters—around 300 people—and here were my parents (to this day I can’t figure out how they found me there in that huge crowd) yanking me back from joining my friends.

My parents were right: I was exhausted. The evening of the march my idol, folk singer Phil Ochs, had been scheduled to perform at Stony Brook. We’d been trying for a month to get him to change the date so that people could go to the demo as well as the concert. We feared that the concert would cut into the numbers going to Washington. But we’d gotten no satisfactory response to numerous letters and phone calls.

Finally, with a hole in my heart, I began organizing a boycott of Phil’s records in the campus store. Shazzam! Suddenly, the concert was moved up, I got a nasty letter from his brother Michael and, when Phil was interviewed by Kenny Bromberg on WUSB, the Stony Brook radio station, he asked: “Who is this asshole Mitchel Cohen anyway, telling everyone to boycott my records?” My first claim to fame.

There was time enough for sleeping later. I simply had to be up there with my friends! Needless to say, they didn’t see it that way. My father, always finding a way to ease the pain when I didn’t get my own way, offered an interesting proposal: “We’re not going to let you up there. But the people sitting-in are going to need food and blankets. Let’s start making a collection.” We spent the next few hours doing precisely that; they then put me on the bus to Stony Brook, where I crashed out in someone’s (whose? whose?) arms all the way back.

Twenty-five years ago! Che Guevara had been murdered by the CIA in Bolivia just two weeks before. We had called in an obituary to the New York Times, billing it to the student government, whose phones we were using without telling them. They were at a loss to account for it when the university administration reviewed the bills.

A few weeks later, New York City would be rocked by a police riot. Thousands of students descended on a dinner for the warmakers. Some radicals had gotten jobs in the kitchen of the Hilton Hotel and, when the country’s elite lifted the lids of their dishes to dine they found pigs’ heads staring right back at them from their plates, and waiters and waitresses chanting: “U.S. out of Vietnam!”

Outside, all hell was breaking loose. This was the first “street action” anti-war demo. Hundreds of people would begin crossing 6th Avenue at the green light, very, very slowly. They’d only be halfway across when the light would turn red. Everyone would link arms, face the traffic, close our eyes and feel the adrenaline take over. Screeeeech! When I dared open my eyes, I found a car stopped inches from my stomach.

Then the police would move in, and everyone would snakedance through the streets (always going against the traffic to tie it up and so that the police couldn’t chase us in cars). Looking back, it sounds absolutely heroic; in actuality, we were scared shitless. Leaving the dinner, Secretary of State Dean Rusk’s car was hit by the first molotov cocktail I’d ever seen, and the cops started cracking heads (Willa Kay Weiner Kay, where are you now?!) grabbed my hand, tearfully, gasping for breath: “Mitchel, it’s time to get out of here!” We raced through Manhattan in search of the bus back to Stony Brook and were amazed to find that most everyone arrived at just about the same time.

The next month, the anti-war movement erupted everywhere: Anti-draft riots, draft card burnings, military recruiters chased off campus after campus, “defense” contractors exposed, thousands blocking troop trains and munitions factories! Even Bill Clinton, in the one good thing he ever did—which he should have sung out proudly during the campaign instead of apologizing for it—took part in the anti-war actions.

The pace of time accelerated, cramming whole lifetimes into the space of a year. We lived “emergency lives;” so filled with meaning, scary, exciting, intense, we were part of a worldwide movement that would (and, I believe, did) begin to change things. Who would know then that the demonstration at the Pentagon on October 21, 1967 would be the start of an anti-imperialist, as opposed to simply “anti-war,” movement? It marked the baptism of a new generation infused with insight and imagination and a willingness to take risks that was, in the next few years, to so shake the entire world.

This morning, as the sun streamed through the windows to the couch I’m on in a new collective apartment in San Francisco, I look around at the young faces of the women passing through, and I talk with them of the projects they’re organizing: a clean needle-exchange to fight AIDS among drug users; Food Not Bombs, which feeds hundreds of people high quality vegetarian meals every day; a self-help workshop to teach people menstrual extractions and to fight cancer; the “Mary Maguellan Liberation Front,” which battles Operation Rescue with militant satire; and of course, anti-war organizing, zeroing in on the corporations profiting from wars as well as government policy.

It is a healing space in which, I proudly observe, all the best energy of the 1960s is finding new form; a new generation carries on.

FE Note: Our author cites 100,000 as the number demonstrating, but the Nov. 15, 1967 [newspaper name missing in print original] states that “police counted 318,000 marchers from the Memorial to the Pentagon.”