Guy Debord, the French author of Society of the Spectacle and a founder of the Situationist Internationale, took his own life on November 30, 1994. He was 62. His insights are valued and utilized by rebels and social critics. 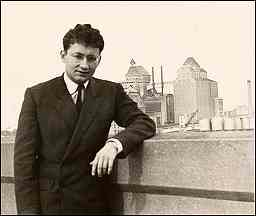 In the past 20 years he lived largely in rural areas and this is where he died (at his home in Auvergne, a mountainous region in south-central France). He was born in Paris, however, and credits this city as well as other urban centers with furnishing him the elements to analyze contemporary society.

Society of the Spectacle was published in 1967. Its 221 paragraphs scathingly denounce the trappings as well as the foundations of mid-century capitalist society. In passionate (and sometimes esoteric) prose, Debord proclaims that commodities lead fuller lives than do humans. He does not pity us humans; he scorns us for accepting the humiliations encountered in consumer society.

In his autobiography, Panegyrique (published in 1988), Debord writes about the many evenings he spent in seedy bars. He valued conversations with underworld characters who congregated there as well as effects of the wine.

Debord took great pains not to be co-opted by spectacular roles. He scrupulously refused media appearances and interviews. For him, academic institutions were beneath scorn. Debord defended his choices. With pride he said that from his youth he always took care to keep his distance from any activity that smacked of intellectual or artistic links. His “enormous laziness,” as well as his “minimal aptitude for tackling a career of this sort,” helped him to stay independent.

Debord’s early affiliation was with the Lettrist movement, a post-W.W. II group of anti-Art artists influenced by the Dadaists. The Situationniste Internationale was founded in 1957. The group was international, organized by “section” according to country of origin. In its 20-year history, the S.I. had a total of 70 members, two-thirds of whom were expelled. The magazine which carried the name of the group, used detournements of comic strips, gross ridicule of public figures, outrageous slogans that sneered at causes held dear by conventional leftist militants and cruel denunciations of former comrades who had gone astray

A large number of the slogans displayed during the rebellious days of May ’68 had their origins in the S.I. journal and Society of the Spectacle. The analysis found in them goes beyond a materialist critique to discover, beneath current ideological hype, that the choices available to 20th century humans are bleak, unless creatively and actively altered. Debord’s articulate commentaries are still apt and challenge us to transform our lives.