The UK Struggle Against Roads
Ecopolitics & the Free State: The Conflict Over the M77 Motorway in Scotland

The Roots of the Conflict 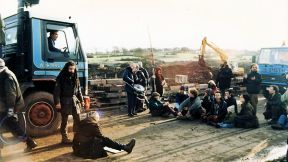 Opposition to M77 Motorway: still from “Given to the People” (film documentary) http://www.giventothepeople.org/

Just to the south of Glasgow, amid the woodlands and park lands of Pollok estate, a site of extraordinary resistance has emerged.

From the roadside, a huge red banner with bright yellow letters proclaims “Pollok Free State,” and where the road gives way to a dirt track, amid tall beech trees, one enters a place transformed.

Huge carved totems of eagles, ravens and owls stand as silent sentinels below tree houses. Shingle paths wind past recycling containers, sunflower beds, a small kitchen and an information center in the process of construction.

A campfire is tended throughout the day and night, symbolic of the residents’ spirit of resistance. Scattered amid the woodlands are a varied array of benders and tents—the homes of the residents of Pollok Free State. Multi-colored flags flutter in the wind. upon them the message “Save our Dear Green Place.”

The dear green place is Glasgow in the Gaelic tongue, and the Free State is the symbol of the resistance to the spectre that is haunting Glasgow—construction of the M77 motorway extension through Pollok Estate. The motorway, if completed, would cut a swathe of concrete and traffic through what is the city’s largest green space. Opposition to this road is Scotland’s first anti-motorway ecopolitical struggle. The proposed destruction of Pollock estate is one more step in the enclosing and privatizing of public land—a continuing process in the British Isles since the seventeenth century.

The Roots of the Conflict

Pollok estate is an area of farm, park and woodland stretching for 1,118 acres, three miles south of Glasgow’s city center. The park lands, oak and beech woodlands, and the White Cart River provide habitats for a rich variety of wildlife. In 1939 Sir John Maxwell of Pollok, founder of the National Trust for Scotland, bequeathed Pollok estate to the citizens of Glasgow. stating they “should remain forever as open spaces of woodland for the enhancement of the beauty of the neighborhood and for the benefit of the citizens of Glasgow.”

Although opposition to the motorway dates back to the 1970s, several recent developments saw the resistance coalesce into a more potent force. In the spring of 1994, Glasgow Earth First! was formed, a non-hierarchical group committed to engaging in nonviolent direct action to prevent further environmental destruction. The group soon began to focus its energy on the M77 issue.

In April 1994, various community and environmental organizations merged to launch the Stop the Ayr Road Route (STARR) Alliance. In June 1994, the Pollok Free State camp was established and acts as a potent visible symbol of opposition to the motorway.

If the STARR Alliance represents the many branches of the struggle, then the Pollok Free State is the root. The camp in Barrhead woods is situated directly in the projected path of the motorway. Tree houses, carved totems, benders and tents, marked out a colorful, defensible space that stands in stark contrast to the ugly scar of rock and gravel that awaits the road-builder’s tarmac.

During July and August, various events were held at the Camp to garner local support for the struggle, including concerts with local musicians, vegan and vegetarian feasts, and family entertainment days. These events culminated on August 20, when the Camp declared independence from the United Kingdom. Pollok Free State passports were issued, on which the declaration of independence was printed. The Free State now has over 1,000 passport-holding citizens and twelve permanent residents.

During the first two weeks of February, when Wimpey Construction, which has the 53.5 million pound contract for building the road, began felling trees along the proposed M77 route, the conflict heated up considerably. Activists chained and locked themselves to chain saws in order to stop construction work, while Wimpey workers engaged in hit and run tactics, felling a few trees at a particular site until activists arrived, and then leaving the site to work elsewhere.

Wimpey’s work was slowed down considerably, but several activists were arrested for breaches of the peace. During one of these confrontations, Scottish Tory Minister Allan Stewart threatened activists with a pickaxe—an act of aggression that resulted in his subsequent resignation, and possible prosecution.

On Valentine’s Day, over 200 police and 150 security guards made a surprise attack on Pollok Free State, sealing off all access roads within a two-mile radius, and enabling Wimpey to fell a 200-yard stretch of elm and oak woodland. During the day, however, 26 security guards quit their posts and joined the protesters. Said one: “They were manhandling women and children. I have a wife and four kids to feed but I’d rather go back on the dole than this.” Also, over 100 school children from Pollok left their lessons to join the protest and succeeded in stopping the felling by climbing on a bulldozer.

Since then, an increasing number of local people have joined the protest, and local school children have begun organizing a boycott of class so they can participate in the defense of the woodlands. In addition, photographs are published of local residents who work as security guards and urge them to join their neighbors in opposing the road.

The Camp is an attempt to create a positive alternative to the road. It draws on the skills of the local community and serves as an inspirational focal point for resistance and nonviolent direct action. In the attempt to nurture community empowerment, the resistance has attracted a bricolage of local talents—silversmiths, artists, scaffolders, tree surgeons, carpenters, musicians and cooks.

All have contributed their skills to create this alternative. The Camp advocates and experiments with ideas of alternative technology, architecture and eco-art. Near the camp activists have constructed “Carhenge”—a circle of nine cars buried hood-down into the roadbed—as a symbol of carmaggedon, and a collection of the only cars that will ever use the M77.

Like the branches of a tree, the resistance to the motorway spreads in numerous directions. It includes locals, students, travelers, environmentalists, academics, planners, politicians, councilors and the unemployed. The resistance also has supporters from various communities of Glasgow, Scotland, England, Australia, New Zealand, Sweden, Germany and the United States.

The resistance has succeeded in generating much favorable local and national press coverage. In a recent newspaper poll of readers’ opinions regarding the M77, over 68% of the respondents articulated their opposition to the construction of the motorway. This popular opposition has led to compilation of a list of names’ of 3,000 local people who have pledged to resist construction of the motorway through direct action. Giving free play to the imagination, all manner of direct actions will be effected to act as a “market force” threatening to impose on the road builders millions of pounds in extra security costs and delays.

The Region’s Roads Department advanced a variety of predictable justifications for the construction of the motorway extension, stating it would: (i) assist economic development; (ii) save traveling time for road users; (iii) reduce road accidents; (iv) reduce road congestion; (v) improve the reliability of the public bus transport system; and (vi) enhance environmental conditions by removing traffic from residential and shopping streets.

However, opponents of the M77 easily rebut their arguments. Environmentally, the road will cause increased noise and air pollution, destroying the tranquillity of the western Pollok estate and exacerbating health problems. The road will destroy Glasgow’s largest green space, causing irreparable damage to woodland and wildlife habitats, while also contributing to the process of global warming.

The motorway will foster increased reliance on car use, exacerbating environmental problems. Economically, the motorway will facilitate car commuting, generating increased traffic. An estimated 53,000 vehicles a day would be funneled across the already congested Kingston Bridge in Glasgow, which is at present undergoing repairs due to damage caused by excessive traffic use.

Socially, the motorway would only benefit car users, and not serve the local communities of Mosspark, Corkerhill, Pollok, Nitshill, Carnwadric, and Kennishead where car use is low. It has been estimated that up to 75% of Glasgow’s population do not have access to car transport.

The road would sever access of these local communities to the Pollok estate (which is a safe recreational area for children) and would cut them off from each other.

By occupying the woodlands earmarked for felling, and by designating this site as a place of affirmation and creativity—as a Free State—the resistance has sought to reclaim the land from the road builders. In doing so, the resistance proclaims its refusal for the land to be appropriated for private ends, for yet more cars and more ‘environmental destruction.

Pablo Routledge last wrote for the Fifth Estate in our Summer 1989 edition about peasant resistance to a missile base in Baliapal, India.