Passionate Mudplay
Piercing the Membrane of the Mundane

Every day for a week I peruse the crumpled quarter-page announcement I’ve been carrying around in my wallet. “MUDPEOPLE: 10th Anniversary...We supply mud. Wear as little as possible. Bring drinks, food, towels, friends, wildness. Finally, the day is here. 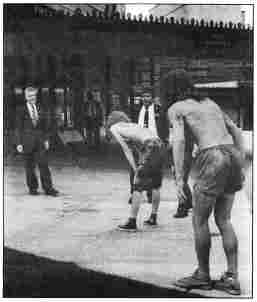 Running late for an appointment with my tribe of scantily-clad, earth-painted comrades I miss one bus and panic like any work-obsessed out-of-breath commuter. After I board the orange and white metal behemoth, I nervously alternate between checking the time, watching the street signs and aimlessly glancing at a word or phrase in the anti-novel I had slipped into my backpack.

Finally, I’m in downtown San Francisco, bus frozen in heavy traffic. I’m better off walking it. I frantically float through hordes of lunch-hour pedestrians. extending my psychic antennae for the precise location of my quasi-tribal clan.

Maybe they’ve already commenced their feral parade which is entirely plausible as my timepiece tells me I’m tardy. My brain remains clouded by civilized notions of time, and I’m convinced I’ll be condemned to wander the streets in search of wildness for the next several hours still clothed and feeling lost.

I walk/run until Market Street ends and the Bay and its bridge are clearly in sight. I turn left and begin to shuffle through an expansive pavilion crowded by semi-relaxed lunch-break office plebes. I’m up conformity’s creek without a map, alone in a crowded business district without coconspirators for disrupting business-as-usual.

The cool, cloudy weather I awoke to has dispersed. It is a beautiful, sunny summer California day. Perfect Mudpeople day I tell myself, but where are my mudpeople? Then I see them; a crowd of bemused and befuddled spectators surrounding a circle of humming and chanting mudpeople.

I immediately discard my satchel and hurriedly disrobe down to my flowered bikini briefs. Not another moment of convention, not another gesture of late-twentieth century regret, not another catatonic descent into discursive language or languid dreariness. This afternoon devotes itself solely to delicious lust, lush defiance and lurid dance.

For a few splendid hours the pretense of petty and polite communication and capitulation lifts its veil to reveal a gyrating gestalt of the gregarious and garish. A moral shroud has been pulled from our soft skins now covered with brown, muddy mother earth mixed with leaves and flowers and a few bright splotches of paint. I’m in the center of this sacred circle as lovely comrades emerge to help complete the ritual of muddy immersion, touching my back and legs in a baptismal blessing of natural dirty cleanliness, covering pink sissy-flesh with dollops of delectable sensuous soot and scintillating scum.

Humming and moaning gives way to drumming and dancing as the mass of muddy monsters, 50 or perhaps 100 bodies strong, begins to slowly move. Most people crawl on all fours, more a collective surreal ooze of human lava than an actual “march.” Those who failed to bring kneepads are more likely to walk upright during the course of our urban tribal tour (the non-bipedal participants, however, were sore for the next few days).

We suspend all forms of formal communication. Momentary lapses into linguistic utterance appear absurd or sophisticated and are met with a blank stare or garbled grunt in return. Two cops have been assigned to follow our freakshow through the congested financial corridor. While they appear acutely annoyed by our disruption of their working day, even these uniformed enforcers cannot restrain slips into overt amusement.

We gawk and point at curious camera-wielding observers as much as they point and gawk at us. Occasionally, ostensibly normal, decently-dressed pedestrians cross the invisible precipice into the wild sanctum of our festivity, allowing us to smear mud on their faces or offering us their food or drink to touch our dry, mud-caked lips.

We climb on anything in our path—trees, garbage cans, newspaper boxes, walk/don’t walk signs. While our outrageously direct affronts to the civilized surroundings challenge convention, they remain free from arrest risk scenarios.

Only when our spontaneous but direct acts invade commercial edifices do the cops have any excuse to chase or chastise us or inhibit our ecstatic undulations in any way. We board a stationary streetcar packed with tourists, hang from the sides and jubilantly ring the bell until a uniformed conductor asks us to exit.

At an outdoor shoe-shine station a lone mudwomyn takes a seat in an empty chair as a laughing well-dressed attendant proceeds to dust her muddy feet with a brush. We descend on an outdoor plaza where a musical duo entertains the Thank-God-It’s-Friday crowd sitting in terraced pseudo-bleachers, artfully landscaped with flowers that some mudpeople eat. As soon as the mudpeople descend with discordant screams and drumbeats, the band takes a breather.

The crowd of onlookers grows as chaos erupts. We seize the show in a manic frenzy of dancing and leaping from terrace to terrace, splashing water in a fountain and banging abandoned seat-cushions on the concrete in a cacophonous ruckus.

Moving along, we discover a fascinating 12-foot metal sculpture depicting the Virgin. Rather than bow to worship the motionless Mother Mary, several mudpeople kneel to devoutly examine the sides of the statue’s base which reveal intricate etchings depicting a panoply of sea creatures and wild animals. I am aroused just running my fingers along the sides of this thing.

The texture titillates me and the smile of the nearest mud person seduces me. Upon standing up, I gaze almost directly into the crotch of a womyn who is squatting atop the base of the statue. Just as I look this way, she pulls back her mud-caked undies and unleashes the wild spray of a gushing golden shower. This spontaneous piss on a primary religious icon invites raucous cheers from a pagan congregation.

The cops just look the other way, lest they feel responsible for dealing with this liquid blasphemy.

At the temple of Ronald McDeath, mudpeople enter to take seats as one more acrobatic and animistic comrade mounts a head-stand on fast food’s formica altar.

Around each corner lurks an enticing surprise. Our primal eyes marvel at almost anything “modern,” from a skyscraper’s towering height to a normative display of civilized behavior to a newspaper on the ground to a french fry....

One critique of the mudpeople which certain leftists invoke is that we perpetuate a false, albeit idyllic, stereotype of primitive peoples, perhaps even a racist one. Do mudpeople represent what some radical academics call “imperialist nostalgia?”

This term refers to the empty romanticization of “primitivism” or indigenous cultures by “First World” citizens as in films like Dances With Wolves. While we should be wary of falling into that sentimental trap, unfortunately, the charge of “imperialist nostalgia” tends to lump all forms of “primitivism” together, whether represented by a superficial fashion statement as with “modern primitives,” or ones backed up by gestures of genuine solidarity with actual peoples still maintaining “primitive” cultures.

The academy usually misses radical primitivism altogether and ends up with a neo-Marxist perspective mired in an embrace of industrial modernity. But rather than replicate some image manufactured by National Geographic or reduce ourselves to some art student aesthetic pillaging of archeological or anthropological data, mudpeople create an autonomous anti-discourse of internal and external wildness which hinges on its auto-critical and, exaggerated mockery of the basic tenets of civilized existence.

We mock ourselves as well as the “suits,” recalling our own inculcated acquiescence to the status quo in other venues of our daily lives. Mudpeople only scratch the subversive surface of the radical break required from the world-as-we-know-it. We borrow the spirit of antiquated archetypes as we carelessly and exuberantly explore our own contemporary mudpeople myth, which has become a late 20th century counter-tradition on its own terms.

We worship the sun and the water and the ground, growling or smiling at most passersby gleefully jolted from the same-old-shit: they are temporarily enchanted and drawn in by our magic.

When people ask us to produce a message or political platform, an explanation for our exaltation does not come easily. What could be more persuasive than sheer pleasure and absurd wonder? Protest-as-usual, complete with signs and chants, demands and slogans, rarely punctures the membrane of the mundane encapsulating daily life. Unless they invoke profoundly colorful and musical tactics, demonstrations are all too often a mere uncreative mirror of the social evils we decry.

However fragile, frivolous or fleeting our mudpeople festivities are, they tempt us away from the humdrum and taunt the voluntary misery of workaday boredom.