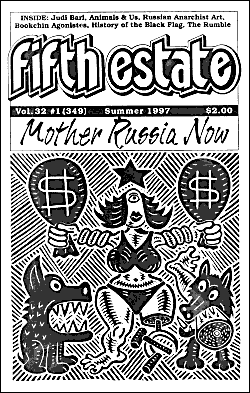 Welcome to our Summer 1997 edition; the last one published was Fall 1996. This issue has been the result of numerous fruitful collaborations. Our visually stunning cover is the work of renowned artist Richard Mock. We used his work for the first time last issue and hope to have more in the future.

Pages 10–13, containing Allan Antliff’s fascinating study of Russian anarchist artists of the revolution, was designed by Alexis Buss, a member of the Wooden Shoe collective in Philadelphia. See page 5 for details On the fire that destroyed their bookstore.

The four-page insert in this issue is the work of The Rumble collective, part of the ambitious Trumbull Theater project. They plan to publish it regularly, and for its inaugural edition, we printed an extra thousand for Detroit distribution.

We mourn the death in April of Allen Ginsberg, who had an enormous impact on our generation. Many of us remember exactly where we were on first reading many of his great poems such as “Howl” and “Kaddish.” We plan to print two interviews with Allen in our next issue, one from the 1960s and a recent one.

[Web archive note: For FE articles by and about Allen Ginsberg visit

Because we ran out of space and time we had to hold several articles until next issue, including David Watson on neo-primitivism and current “ecofascism” debates, Rob Blurton on social work, Peter Werbe on “How I Stopped Recycling and Learned to Love It,” and Mitchel Cohen on the Gulf War Syndrome. It promises to be an exciting issue, but as usual we will need money to produce it. Please renew your sub or become an FE sustainer.

Max Cafard’s review of Murray Bookchin’s latest effort (see page 20 this issue) pretty clearly closes the book on him. We hope people will still read David Watson’s Beyond Bookchin (see book pages) for the larger issues raised. We offered Murray space for an 1800-word reply to our critique of him, but he didn’t respond. It’s down to 1000, Murray. Last call.

We rarely join organizations, but several of us were members of the Downtown YMCA, housed in an 88-year-old landmark. The Y was a good place to work out, it had a modicum of community and, refreshingly, was also integrated. In one of this country’s most segregated metropolitan areas, it was a place where whites and blacks mixed, made friends, and appreciated the all too rare contact. Detroit is a harsh city, and given that context, going to the Y tended to make life a little more humane and bearable.

But corporate neoliberalism is rapidly pulverizing and reconstituting whole landscapes on the whim of unmitigated greed, “ponzi”-style, and Detroit has not been spared. Following a blatantly manipulated and sparsely noticed referendum allowing public funds to be used for financing of two adjacent sports stadiums for multimillionaire/Little Caesar’s Pizza owner Mike Ilitch, the Y, which stood at the corner of the stadium parking lot, had to come down. YMCA officials proved what corporate bootlickers they are, doing everything to unload the building and its programs as fast as they could.

The same kind of rapacious greed and corruption is evident in the slated destruction of the empty Hudson’s Department Store on Woodward Avenue, Detroit’s central thoroughfare. Once a showpiece of downtown commercialism, the City allowed it to be vandalized and stripped, but there was interest in restoring the serviceable, though architecturally unremarkable building, for other uses.

But Mayor Dennis Archer, who is becoming even more transparently shameless in his service to corporate looting than even his predecessor Coleman Young, manipulated City Council approval to demolish the building (which will cost anywhere from $12 to 30 million), promising a “secret plan” for the site that everyone knows does not exist. (Detroit Metro Times investigative reporter Curt Guyette has done an excellent job reporting these landgrab schemes.)

Local surrealist poet and artist Maurice Greenia took advantage of the limbo state of Hudson’s to create some graffiti art of beings and dream visions like his drawing above, covering the first floor panels of the boarded-up building.

Though he started in chalk, the City kept painting over his work (even though they could have simply washed it off). Now they’ve left it up, since the building is not to be with us long. We recommend a look at it while it’s still there.