It started around 10:30 p.m. Monday, July 24 on Prentis, while there was a small integrated group sitting in front of our apartment building, talking like they do every night, and the police came by and saw them and said “Get in the house, white boy, and you too nigger!” 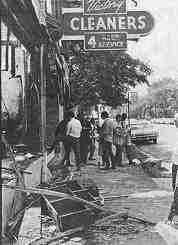 Fifth Estate co-editors Ovshinsky & Werbe interview looters as they window-shop at a cleaners at the corner of Trumbull and Forest. Photo by C.T. Walker.

These people came in and told us and we went out and told the police that they didn’t have to talk to those people that way because they weren’t causing any trouble. The police and National Guard came by in trucks and told us to get in the house or they’d kill us. We went in and came back out to talk about twenty minutes later, and they told us to get in the house again, then started shouting that they’d kill us if we came back out. Someone shouted that it was too bad that there weren’t any Indians around and the police started firing shots into the building. They didn’t hit anyone, but there are marks all over the apartment.

They went up and down Prentis shooting at the buildings. We watched from the apartment, and when the National Guard left, people started throwing bottles from the roofs so that if they came back, they’d get flat tires. A couple of carloads of Detroit Police came by with shotguns, pistols, machine guns and riot helmets. Every cop had at least two guns. They were walking up and down the street and right below our window we hear them say “Well, we’re going to kill some of those fucking hippies.” They came into the apartment building, and since our apartment is first, they came in there first.

Six policemen came in and held guns at everyone’s head, with the safeties off and ready to shoot us. None of the policemen wore their badges so we couldn’t get their numbers. One guy came walking out of the bathroom and the police started hitting him with the butt of a gun until he fell down on the couch. Most of the girls in the apartment were crying by this time. The police searched the apartment, broke our radio, searched the refrigerator, and kept repeating all this time that they were going to kill us if we moved. They couldn’t find anything that they thought was wrong so they told us that the whole place smelled and went upstairs and beat up some more people.