Anarchy in Toronto
The anarchist movement reinvents and redefines itself at Toronto’s second Mass gathering in a decade.

Celebration of Our Freedom 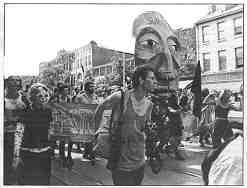 TORONTO—Accompanied by much fanfare and a bit of controversy, this Canadian city was the setting August 17–23 for its second international anarchist/antiauthoritarian gathering in a decade. The organizers titled the event, “Active Resistance,” (AR), after the 1996 Chicago anarchist actions of the same name at the Democratic National Convention. (See FE #348, Fall 1996)

Approximately 700 people registered for a week of workshops, forums and demonstrations, but numerous other unregistered people swelled actions like a “Hands Off Street Youth” demonstration to nearly twice that number. An impromptu rally of 250 people in front of the US consulate followed Clinton’s terrorist bombings in Sudan and Afghanistan and an all night camp-out, in solidarity with the Ontario Coalition Against Poverty, was held at a reactionary business establishment.

The 1980s saw similar gatherings in Chicago, Minneapolis, Toronto and San Francisco, and like those, this gathering was important for the person-to-person links that were established. Some denigrate this as mere socializing, but it is an important part of alliance-building. [1]

Evening events included a rowdy night of films and talks on subjects such as “Indigenous Struggle in Chiapis,” “Native Struggles and Spirituality,” and “Political Prisoners/Prisoners of War.” An Agit-Prop crew convened each night to put out a daily zine called In the Streets. This excellent initiative kept everyone abreast of changes in scheduling and provided a forum for people’s concerns and ideas.

Artist Stefan Pilpa did a fantastic “Active Resistance ’98” poster, and everyone was indebted to Jesse Hirsh and Tao communications for providing AR with its e-mail network.

A host of daily workshops were held, and four “Core” meetings ran each afternoon—“Building Revolutionary Movements,” “Alternative Economics,” “Community Organizing,” and “Art and Revolution.” Art and Revolution is where I hung my hat. Thirty people built giant puppets, painted banners, and planned theatre for the demonstration that was to cap the week. Early on, several street people came to a meeting and told us about the police brutality plaguing the homeless. After a short discussion, we decided to shape the Art and Revolution component around their stories.

Art and Revolution was born at the 1996 anarchist gathering in Chicago where a group of artists and performers from San Francisco invited people to join a week-long street theatre workshop which created masks, music, puppets, and theatre for a march on the Democratic Party convention site. Art gave that demonstration unprecedented coherence and energy, and afterwards the San Francisco group formed the Art and Revolution Convergence Collective, “dedicated to infusing radical social movements with art, theatre, and creativity.” [2]

They took their show, and their hallmark giant puppets, on the road to numerous protests during the next two years, and out of this grew a loose-knit federation. At the Toronto workshop, we enjoyed the benefit of experienced Art and Revolution folks from San Francisco, Olympia, and Boston. [3]

Art and Revolution’s impact on the demonstration was dramatic. After an opening theatre piece spelling out the reasons for our protest, the police were confronted with a 1000-plus crowd marching down the streets behind a giant puppet whose out-stretched arms unveiled a banner declaring, “Hands off Street Youth!” Radical cheerleaders waved police-line pompons and chanted, demonstrators parodying cops on horseback strutted around on stilts, banners and flags were raised, and a masked theatre contingent weaved through the procession while a drum crew pounded out rhythms. Babies waved from street cars and bystanders were drawn in by the joyful and boisterous atmosphere.

Celebration of Our Freedom

Art and Revolution not only reached out to spectators who might have perceived our march as a threat, it united us around a celebration of our freedom, rather than a confrontation with our oppressors. Demonstrations often end up focusing on the inevitable phalanx of heavily-armed riot police poised to attack, whose ugly presence dominates the proceedings. The effect of the cops can be either chilling or fill people with hate and anger. Either way, the police police the minds of demonstrators and spectators alike with their ritualized surveillance-and-attack behaviour. The media end up reporting the event from the cops’ perspective, marginalizing both the marchers and whatever issue they attempt to bring to public attention.

This time around we set the agenda, creating a free space for protest that was not only serious, but also fun and inclusive, rather than exclusionary and threatening. Parents with children, people in wheel-chairs, and older folk could join our march in safety, but that didn’t stop the “illegalities.” You could sense the cops’ confusion as we squatted the streets, stopped traffic for chants and fired-up anti-cop/anti-poverty speeches at major intersections, and occupied the front of a downtown precinct station where we presented a second demonstrative theatre protest against police attacks on street people. Sidelined in overheated riot gear, the cops’ authority wheezed out like stale air from a pricked balloon.

Although elation often characterized the week, the gathering was not without problems.

Anarchist organizer, Lorenzo Ervin, a former Black Panther party member, whose trip north was sponsored by the AR organizers, complained during one session that the gathering was a social event for “white middle-class punks.” Applying the classification “middle-class” to AR radicals, the vast majority of whom survive (as I do) on annual incomes under $8,000, strikes me as a misnomer, to put it politely.

Though the majority of participants were of European origin, that did not exclude people who weren’t, as the special effort to include Ervin evidences. The people at AR were interested in an expanding anarchist movement. No less than ten workshops were convened either by people not of European descent or to specifically further solidarity with and understanding of people of color. [4] In short, AR was neither “white,” “middle-class,” nor “punk” (whatever that string of categories means).

The only other problems were organizational. AR happened thanks to a lot of hard work by a large group of committed radicals, and they deserve praise for their efforts. It seems, however, that AR’s organizing committee over-shot the mark with projected expenses by a considerable margin.

Left-over funds were distributed by the committee to the next anarchist gathering’s organizers, financing a post-AR zine, and the rest split among local Toronto activist groups. That’s fine and fair, but when I plunked down the $35 registration fee, I assumed it was going towards feeding those from out of town and expenses for the actual event, not post-gathering donations. [5]

A second glitch involved day-to-day procedures. A daily plenary session was supposed to convene where concerns could be hashed out, but they never happened. This was a major oversight, as at least one important issue was not properly dealt with in a democratic fashion until the end of the gathering. Everyone, myself included, let the organizers down. Failure to hold the daily plenary should have been addressed the first day it didn’t occur rather than left until the last moment and after some misunderstandings had built up.

That said, Active Resistance was a great success. Everyone hoped the event would reinvigorate the regional anarchist scene and I’m glad to say it has. In Toronto, a new Earth First! group has been formed, an Anarchist Free School launched, Who’s Emma bookstore is sponsoring a Radical Film night, and other projects are pending. Similar activities are springing up elsewhere, as well. Enthusiasm for another gathering is high, but a city and date haven’t been established as of this writing.

1) For instance, I will be doing a speaking tour in Quebec this fall thanks to connections forged at AR.

2) This overview is taken from an Art and Revolution Convergence Collective pamphlet, The Incomplete, True, Authentic, and Wonderful History of May Day, issued on the occasion of San Francisco’s “Reclaim May Day” demonstration of May 2, 1998.

3) The Art and Revolution Convergence Collective can be contacted at fire@iyc.org.

4) Among them were “Native Solidarity:” “Cultural Genocide: First Nations Considerations for All Movements:” “Stopping the War on Refugees and Immigrants in Canada:” “Chiapas Solidarity Caucus;” “Human Rights Observing in Mexico:” “International Solidarity and Division, of Indigenous People:” and “Black Liberation Radio.” Canada’s French/English conflict was also informally discussed, though the significance of this particular divide escapes Ervin, as it does many radicals from the US.

5) Hopefully, the post-AR magazine will feature a breakdown of how the funds were divided up.