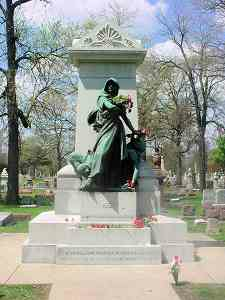 Comrades from Chicago’s Louis Lingg Society and Autonomous Zone are continuing their campaign to keep the truth about the Haymarket martyrs alive and to combat the lies and half-truths of the ILHS. As they so aptly ask, “is it not complete hypocrisy to love the martyrs and hate their anarchism?”

They have an extensive education package available about this shameful incident and the monument’s history. Contact them at Box 163, 1340 W. Irving Park, Chicago IL 60611, and please enclose a donation for postage.

The Fifth Estate received the latest ILHS Reporter, 28 E. Jackson Blvd., Chicago IL 60604, which described the dedication as “an extraordinary bonding experience” and said the event “seems destined to win a place in the rich heritage of Chicago labor lore...”

In a section entitled “The Angry Ones With the Black Flags,” they report, “About a dozen self-styled anarchists came to complain. Mostly youthful, they carried black flags and, to add to the bizarre scene, some were dressed in skeleton suits.” “Self-styled?” As opposed to what? Officially designated?

Everything that the article above criticizes, the ILHS article celebrated, from commie lit tables on Emma’s grave to the appearance of the monsignor.

They labeled a speech by the president of the city’s labor federation as “punchy,” when he said labor was fighting the “same enemy fought by Gompers and Debs, Reuther and Meany.” Gompers and Meany particularly, but even Reuther were more the friends of capital than of labor.

Perhaps the most dishonest part of the newsletter account was a photograph showing the base of the Haymarket monument with graffiti reading “Down With Power,” along with a circle A which the newsletter ascribed to “the hands of anarchists” as if it was done the day of the dedication. According to Chicago comrades, the writing had been there for months, and none of them approved of the defacement.

“The Contest for Memory: Haymarket Through a Revisionist Looking Glass,” FE #352, Winter, 1999