Glories of the Free Market

The world’s 225 richest men have a combined wealth of over $1 trillion—equal to the annual income of the poorest half of the world. 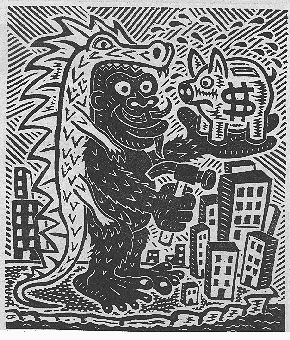 The world’s 225 richest men have a combined wealth of over $1 trillion—equal to the annual income of the poorest half of the world.

* Globally, the richest fifth of humanity holds 85 percent of the world’s wealth; the poorest fifth, 1.4 percent.

* The three richest men in the world have assets greater than the combined gross domestic product of the 48 poorest nations.

* In the U.S., the richest 1 percent holds more than 40 percent of the nation’s wealth, doubling their share in just 20 years.

* Middle-class Americans lost 10 percent of their wealth in the last 12 years.

* The income gap between the best and worst paid U.S. workers is now the most extreme of the 25 most industrialized nations, exceeding even economically lopsided societies like Guatemala.

* Even without an expanded industrial base or becoming First World-type consumers, the poorest nations, where 800 million people are hungry and 40 Million are infected with HIV, could solve their basic problems of food, clean water, and health care with only 4 percent of the combined wealth of the 225 richest people in the world.

* The real scandal of our age is that the rich are vampires whose wealth and privilege come at the expense of the death and suffering of hundreds of millions.

Information from the Mainstream Media Project, Bread for the World Institute, and the 1998 United Nations Development Report.

Illustration: Richard Mock. The penetrating and often ominous linocuts of Richard Mock have appeared in this paper for several years including two front pages. An exhibition of 100 “money lures” constructed by Mock are at the Independence Community Bank (Red Hook), 498 Columbia Street, Brooklyn through February 28. Mock’s sculptures raise questions about the nature of banks, money and the longing for it. Each lure has a fishhook to snag the cash, a ceramic totem to animate its power, and a tail of shredded money.