A Blip In A General Decline

Fifth Estate Note: Some terminology in this brief but potent essay differs somewhat from the language generally used in the FE.

For example, we normally do not invoke Marx and Engels in economic critiques, but much of their economic analyses remains valid into the modern era.

Also, we feel the commonly used term, employed here by the author, “developing,” is inaccurate to describe the nations of the South—that is the Southern tier, non-industrial countries. The phrase connotes a process that is not occurring, as the article ably points out

Despite these minor differences, we think his description of contemporary capitalism is compelling and deserves wide possible dissemination. 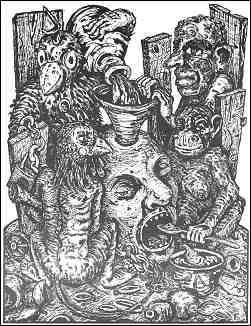 During the post-Second World War economic boom, Marxists were hard-pressed to defend the key tenet that capitalism tends to raise the rate of exploitation of workers by lowering their real wages relative to labor productivity and profits. Amid unmistakable improvements in material living standards for most workers in most advanced capitalist countries, it was hard to argue that the working class was undergoing relative impoverishment, let alone absolute impoverishment.

No more. Impoverishment and immiseration are on the rise just about everywhere in the world. This is evident in statistics on rates of unemployment, poverty, homelessness, and hunger. And it strikes the eye in just about every major city—in the sullen slums of Western bourgeois democracies no less than in the gritty capitals of former Soviet bloc countries and the teeming shanty cities of the peripheral South.

A Blip In A General Decline

What’s more, evidence is accumulating that post-Second World War prosperity may prove in the long run to have been no more than a blip in a general decline in living standards since the advent of capitalism.

According to Immanuel Wall, “Perhaps as much as 85 percent of the people who live within the structures of the capitalist world economy are clearly not living at standards higher than the world’s populations of 500 to 1,000 years ago. Indeed, it could be argued that many, even most of them are materially worse off.”

Capitalism’s tendency to generate wealth for the relatively few and poverty for the many is as much in evidence today in both the developed North and the developing South as it was in the 19th Century England of “dark satanic mills” that Marx and Engels so perceptively analyzed. Now, as then, the poor grow poorer as the rich grow richer.

The deterioration of living standards of the English working class during the early and mid-stages of the Industrial Revolution was halted and gradually reversed largely because some of the wealth sucked from overseas colonies trickled down to the masses, and millions emigrated overseas, reducing the reserve army of unemployed. Today, there are far fewer under-populated parts of the world to ship surplus workers to. So, a halt to the worldwide decline in living standards is unlikely anytime soon. Indeed, it is unlikely as long as capitalism dominates the world economy.

The post-Second World War improvement in wages was consistent with Marx’s proposition that real wages can rise provided they do not interfere with the progress of accumulation. And the post-1973 erosion of wages follows his view that where the reserve army of unemployed is large, real wages can be driven down even below subsistence. Currently, the reserve army of unemployed and under-employed is estimated at a third or more of all workers worldwide. With so many people desperate for any work at any wage, it is little wonder that absolute impoverishment is on the rise in so many parts of the globe.

The United Nations Development Programme estimates that “more than one billion people in developing countries lack access to basic health and education, safe drinking water and adequate nutrition. And one person in three lives in poverty.” An estimated 100 million are homeless. More than 800 million are too poor to afford an adequate diet.

Hunger is widespread and increasing, most notably in Africa but also in the United States where, according to Congressional testimony, the hungry increased to 30 million in 1995 from 20 million in 1985. By the government’s own estimate, 36 million Americans lived in poverty in 1995. Even Americans who consider themselves middle-class are being squeezed by a general decline in inflation-adjusted wages that has persisted for more than 20 years, as well as humbled by the erosion of job security and benefits.

The erosion of material living standards in both North America and Europe reflects more than corporate greed, the siphoning off of industry and jobs to the low-wage South, the weakening of labor unions, or even the economic stagnation common to capitalist economies unable to provide sufficient productive investment opportunities to absorb surplus profits. It also reflects the ever mounting costs that industrial societies sustain to maintain larger and more specialized bureaucracies, to gather and disseminate information critical to centralized control, to educate ever more narrowly specialized experts, to fund research and development, to legitimate the status quo, to militarize against real and imagined external threats, and to maintain internal control over increasingly restive populations.

All of these costs are levied disproportionately against the working population—by businesses in the form of higher prices and by governments in the form of increasingly regressive taxes that have reduced labor’s share of the economic surplus relative to both labor productivity and profits.

The decline in living standards of most workers in most mature capitalist countries would appear even greater if expenditures that workers make out of necessity rather than choice were included in the calculations. New needs—more schooling to prepare for desirable work, a car to commute to a distant job, manufactured entertainment to compensate for the social isolation caused by the breakdown of interactive local communities—raise the real cost of living without necessarily improving the quality of life.

Much is made by apologists for capitalism that, deplorable as poverty is in wealthy countries, the poor are still living better than their forebears used to and their counterparts in less developed countries still do. If living standards were determined solely by the quantity of one’s personal possessions, this would generally be true. But poverty is not just the absence of possessions.

Above all, it is the denial of the essentials of a decent life: freedom from exploitation, oppression, violence, drudgery and hunger; freedom to lead the life one values, to assert one’s traditions and culture, and to participate actively in community and political life; access to meaningful work, basic education, health care, and a non-polluted environment; and, above all, a sense of empowerment and purpose. In all these essentials, the world is poor indeed—and getting poorer all the time.

This article originally appeared in the June 1997 Monthly Review and is reprinted with the author’s permission.