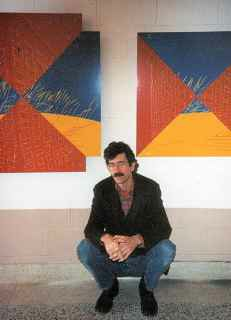 FE Note: The area in which the Fifth Estate office is located is known as the Cass Corridor. For years, due to its proximity to an urban university, it has been home to and nurtured endless generations of youthful rebels who cross-fertilized each other in the arts, politics and (Gaia forbid), alternative lifestyles. Each learned from the other, and sometimes there were no divisions as artists were political, and politicos lived alternative lifestyles and were artists, etc. Paul Schwarz was such an individual, who functioned mostly in the arts milieu, but who also was an astute political observer, and took part in many activities. As his friend and co-conspirator, poet Ken Mikolowski, averred in his eulogy to him printed below, Paul’s untimely departure left a hole in this community. In death, as well as life, Paul exemplified the entire community. He was buried wearing an IWW pin on his lapel.

Paul Schwarz made pure art, a spiritual art without pretense, but with plenty of intensity and emotion. He had a fascination for geometry and precision, but there was always a real person in his work, someone who struggled with everyday life—all its contradictions and that was always reflected in his work.

That was his genius—a balancing of simplicity and complexity, of innocence and sophistication. He had a highly developed technical skill that could be presented as raw and primitive as the city he lived in and loved.

Paul was a part of a community of artists and musicians and poets who were all so intertwined and influenced each other so much that it is certain the whole we created is bigger than the sum of its parts. But we just lost one of our major pieces. We lost our spiritual leader, Paul Schwarz, the Conscience of the Corridor.

Paul was concerned with the sense of community, how important it was to stay together, and to support each other. Christine Monhollen and Paul’s house was a major gathering spot where we all partied and schemed and hugged and patted each other on the back. Along with Dennis Teichman and Deb King, Paul helped make Past Tents Press.

He worked with Chris on Dispatch, a new journal. When Jim Gustafson had problems with the Detroit Institute of Arts (DIA), Paul made a button of Jim’s bandaged hand that became our symbol of unity. Paul’s buttons being just another example of elevating the everyday commonplace object to art. As Dennis Teichman pointed out, Paul was a great maker of stuff. And with whatever was at hand. Give him something and it later appeared in a piece of his art. Nothing was ever wasted on Paul.

The first time I met Paul was at his studio in the Forsythe Building, probably about 1972. He was using his characteristic method of turning found objects into art. In this case, the found objects were dead mice and he arranged them on a board and covered them with a thick layer of white epoxy! As our then nine-year-old Michael said, they looked like marshmallows. Truly a unique and lovely piece that dealt with the absurdities of art reflecting life/death and its spontaneous creation into capital “A” Art.

Paul’s work developed through the years with his many shows at the Willis, Feigenson and Hill galleries, and the DIA. But he never lost touch with the community he helped form. He continued his contributions to all the Willis Gallery benefits, but as he would be first to know, it was he who benefited most from a Willis Box Show since Christine was the winning bidder on the piece he donated, and the rest, as we say, is romantic history. And you know, it’s our history too because we’re all a part of this whole.

Let me end with part of a poem by brother Jim Gustafson, another big piece of it all:

...it did indeed happen.

And we were all there. It happened differently

for each of us, for all of us

who were there, right there when it happened.

Those of us who were there

wanting to be real with the wonder of it all.

Determined to do more than survive,

but to keep our voices vibrant,

We came and went, did good, did bad,

wanted, wasted, loved, lost, were once,

knew when, cared much, took it hard,

believed it all, and we all

spent some time in the world.

—from “The Last Roundup,” Virtue and Annihilation