Behind the Macho Front

Women in Black is against the whole continuum of violence, from male violence against women, to militarism and war. It is for justice and peace. It is for multi-ethnic democracy. It is for nonviolent, negotiated, means of resolving differences. There is an implicit analysis that a certain kind of masculinity fuels and is fueled by militarism and war, and that this is harmful not only for women, but also for men. 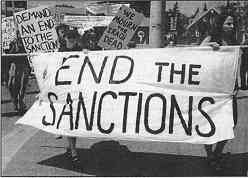 Detroit Women in Black march in heavily Arabic Dearborn, Mich. in 1998 demanding an end to the US assault on Iraqi civilians.—photo/ Rebecca Cook

Women in Black started in Israel in 1988 as protests against the occupation of the Palestinian West Bank and Gaza. It was those women who established the characteristic form of action, mainly silent vigils by women standing alone as women, wearing black, in public places, at regularly repeated times.

At the time of this writing, as the ethnic aggression intensifies in Kosovo/Kosova, and NATO bombing shows no sign of ending, there is very little space for this kind of politics by women. Even less than usual. The little space that is sometimes there has closed right down, not just in Yugoslavia, but in the UK too. What is happening is polarization, a kind of “either/or” politics.

Take, for example, a big demonstration on April 11 called by the Committee for Peace in the Balkans, largely framed by the Socialist Workers Party, at which the speakers included many well-known names from the British left. Some of us took a Women in Black banner along.

Many of the Women in Black network in -London want to oppose NATO bombing. Our opposition is not to protect Serb nationalist extremism, but precisely because we would see the bombardment as strengthening, not weakening it. For that reason we have been holding vigils in London.

On April 11, even as the march assembled on the Embankment, I was feeling uneasy because there was this ocean of pre-planned Socialist Worker placards that simply said, “Stop the NATO Bombing.” Any messages opposing the ethnic aggression of the Milosevic regime were overwhelmed by this uniform and singular demand.

We reached Downing Street, where the march was joined by a strong contingent of Serb nationalists and their supporters. We were surrounded by the Serb national flag, the characteristic three finger salutes, and many people wearing the new target symbols that have been adopted in Belgrade since the bombing.

At the bottom of Trafalgar Square, things got very confrontational. To the left, held back behind barriers, was a militant Kosovan counter-demonstration supporting the bombing. Angry Serb nationalists were shouting back from “our” side of the road, some of them carrying a scaffold with an effigy of Clinton. At that point, I took down the Women in Black banner. It seemed the wrong place to have it.

Behind the Macho Front

Some of us women decided that we wanted to meet people at the Kosovan demonstration. We wanted to find out whether they were all Kosova Liberation Army, to see what other groups might be represented there behind the macho front, and talk with them. We wanted at least to let them know there were some people on the main march who, although you wouldn’t know it, not only opposed bombing, but also opposed Milosevic and what his regime was doing in Kosovo.

The police tried to stop us crossing to the other side of the road. One of them said, “You can’t change your mind now, you chose this demonstration; you’ve got to stick with it. Don’t you know which side you’re on?” That seemed to epitomize the situation.

We went over anyway. What was worse, though, was that the same kind of message we were getting from the police was also coming across from the speeches in the Square. It was clearly a difficult situation for the speakers to deal with, addressing an audience in which the thing mainly visible was Serb flags.

One woman speaker on “our” platform did criticize Milosevic.-She got booed by the crowd. Perhaps this warned off the other speakers. I did not hear the word Milosevic mentioned again. The impression given was that there was one enemy and that was NATO.

People spoke of “the humanitarian disaster in Kosovo,” but, since Milosevic was not named, the implication could have been that it was the result of the bombing. Nobody I heard speak acknowledged the presence of the Kosova demonstration across the road, or expressed any discomfort in being separated in this way from the victims of ethnic cleansing.

It seemed to me (although I know views are divided on this), that the organizers allowed the rally to be hijacked by Serb nationalism. You had the feeling they were thinking: “One thing at a time. You can’t oppose bombing and oppose Milosevic in the same breath.” But all the time I was thinking, there must be people here in Trafalgar Square from the democratic opposition to Milosevic. There are sure to be some men here in the crowd who have deserted from the Yugoslav National Army. They, like us, must feel silenced by this atmosphere.

Nor was the problem only one of polarization. There was a parallel problem of homogenization. In bombing “the Serbs,” NATO is effectively being racist about Yugoslavia. It is as if they think a pure Serb nation is a reality in Yugoslavia in the way Milosevic would like it to be. Governments’ failure to see beyond ethnicism is one thing, but the organizers of this demonstration, called to oppose governments, seemed to fall into the same trap of talking as though the people beneath the bombs are “Serbs.”

In reality, the Yugoslavia that Milosevic governs is not much more than 60% Serb. There are twenty other nationalities living there, Hungarians, Romanies, Croats, Sandjak Muslims, Montenegrans. There are people of mixed marriages and mixed parentage.

Probably many of these were present in Trafalgar Square on April 11. What were they feeling about being addressed as if all of them were holding Serb flags?

By now I was full of doubt and confusion. We had folded up the Women in Black banner, but should we be here at all? I remembered a message I had a few days before from a (so-called Serb) woman friend living in Canada.

She had written, “The stage is set right now as if anti-NATO is for ethnic cleansing, Milosevic and radical nationalism. And that is very dangerous.” Because of this, she said, “many people have problems with protesting.”

I began to think about the women we work most closely with in Yugoslavia: the Women in Black group in Belgrade. They have demonstrated against the Milosevic regime, in rain and shine, in Republic Square once a week since 1991. Now what rains on them is bombs.

I went home after the demo and read through the many e-mail messages we had from them in the preceding weeks. I did it to recover a sense of direction and belonging. I remembered that during the equally dark days of the Bosnian war, when we had difficulty unifying women in London (who were not only British but also from every Yugoslav ethnic group), the one thing we had always been able to agree on was supporting the women peace activists in Belgrade.

I read how they have persisted, against increasing odds, in keeping in daily contact with our women colleagues in Pristina, Albanian Kosovans, and have tried to keep supporting them.

The atmosphere in Belgrade is getting more and more sexist and misogynist. The women write from there that many placards on the streets say things like “Fuck you, Chelsea” (of Clinton’s daughter), and endless references to Monica Lewinsky, calling, “Come back, Monica,” so that Clinton might “screw her instead of Serbs.” And so on.

The little space there was for active and autonomous women is narrowing down, along with tolerance of any other kind of counterculture.

As the bombing ended its second week, things were clearly getting tougher for women and other peace activists in Belgrade.

One woman wrote: “Our problem here is that we cannot say a word anymore, all human rights are suspended. Only anti-NATO appeals can be published. So, Women in Black Belgrade have decided not to make any appeal, at least for the time being, because we cannot as well state that we are against Milosevic. So, I live with a mask on my face, if I talk to other people. Everything changed here, and fear is everywhere.”

But, here in London we do not have to wear that mask. We can speak out both against the bombing and against the Milosevic regime without any kind of risk or fear.

On the demo on Sunday April 11 that was not happening. One statement had been allowed to silence the other. I really think we have to keep both clearly there together, even if it seems contradictory. There is a saying that the first casualty of war is truth.

I am feeling that another casualty in this war, right now, is the willingness to live with ambiguity and contradiction, to say “not this (not ethnic cleansing), but, not that (bombing) either.”

Another casualty is the ability to say, “I don’t have an answer.” Preparing for Women in Black vigils in London we are having a lot of difficulty just now knowing what positive demands we can put on our banners and placards. But maybe we have to admit that we can’t have very concrete answers at this moment, because the mistakes were begun years ago.

But the thing I most feel I want to do is just keep listening to the women who are there, the ones who are taking the risks, and whose political judgment we have by now got eight years of knowing, we can trust. And the things they do clearly model for us is: keep talking, keep the channels open, cherish diversity, believe we can live together, refuse military solutions.

And, choose a way of doing things that ridicules and counteracts all the sexist, masculist posturing that goes with militarism on every side.

There are Women in Black groups now in many different countries. E-mail them in Spanish at roal@nodo50.ix.apc.org and, in the UK at jane@gn.apc.org).