Joseph Labadie and the Labor Movement
Life of a Detroit Anarchist

Living in the Wilderness

As a native Detroiter, I was raised with a belief in the strength of the labor movement, the power of the unions, and the importance of the Almighty Henry Ford to the economic life of Detroit. 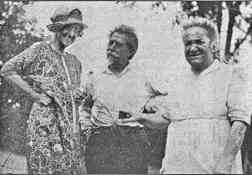 Agnes Inglis, first curator of the University of Michigan’s Labadie Collection, with Jo and Sophie Labadie in the late 1920s at Bubbling Waters, the Labadie home in what is now Kensington Metro Park outside of Detroit.

Our city made the map in the 1920s, when thousands of workers (including both my grandfathers), were recruited to work for Ford for $5.00 a day, a generous wage at that time for unskilled workers. There was always a love-hate relationship with Ford, on the one hand being the bread and butter for our families, and on the other a king who ruled with an iron fist.

These contradictory emotions are depicted in Diego Rivera’s riveting mural of industrial Detroit, which the Mexican artist painted at the Detroit Institute of Arts in 1932.

For many labor radicals, the era of the Model T is when the industrial history of Detroit began. However, Anderson’s book about pre-Ford Detroit breathes life into a generation of radicals whose names today are obscure. Even when I came to work as Assistant Curator at the University of Michigan’s Labadie Collection, the foremost collection of anarchist materials in North America, I was not aware of the significance of the people whose names filled its shelves. Of course, I knew of Voltairine de Cleyre, Emma Goldman, and Samuel Gompers. But who were Judson Grenell, Thomas Barry, Stephen Pearl Andrews, Henry Bool, John Francis Bray, Benjamin R. Tucker, Agnes Inglis, Richard Trevellick, Robert Reitzel, or even Joseph Labadie? I am grateful to Anderson for showing me, because Henry Ford doesn’t deserve so much recognition.

Living in the Wilderness

Jo Labadie (1850–1933) began life among the remnants of the Pottawatomi tribes in Paw Paw, a small southwestern Michigan outpost, with a fur-trapping, wandering father, Anthony Cleophis Labadie, of Ojibway and French ancestry, and a French-Canadian mother, Euphrosyne Angelique Labadie. (His parents were distant cousins). Labadie’s godmother was an Ojibway, who gave him his middle name, “Otwine,” later translated to Antoine.

The story Anderson (Labadie’s grandchild) tells of her French-Indian pioneer ancestors, living in the wilderness, is one we don’t often hear. The fragments she has painstakingly pieced together to tell this story had been saved by Labadie, a notorious packrat, and carefully preserved by his devoted wife and companion, Sophie, and passed down to the author by her uncle, Laurance Labadie, Jo’s son, also an anarchist, who died in 1975.

The Labadie family moved from Paw Paw to East Sandwich, Ontario, a small settlement on the Detroit River, when Jo was a boy. This is a part of early Detroit history of which I knew little. I had seen maps of the early French “ribbon farms” in Detroit of that period, but reading of the Labadie family’s friendships with the Indians of Walpole Island—Chippewa, Ottawa, and Pottawatomi—brought to mind Fredy Perlman’s The Strait, with its dreamy and captivating imagery of life along the banks of the Detroit River, and eventual demise of the indigenous tribes at the hands of the “bluecoat” invaders. Although Anderson’s story is more prosaic and less violent, its telling evokes a similar picture of this region’s history.

The Labadies, the first non-Indian settlers on that land, eventually lost their home to land speculator and whiskey baron, Hiram Walker, who built a distillery which is still in existence today. The ousting of the Labadie family resulted in their move back to southwestern Michigan, among the Pottawatomi, again living a pioneer existence.

This is the life Labadie would always long for, and later help form his individualist anarchist ideals. Simple tribal life, with its emphasis on communal responsibility and economic equality, made a lasting impression on him. The Labadie family’s long friendship with the Walpole Island Indians may have even saved their lives during a violent uprising, when the native people spared the lives and homes of those who had befriended them.

As Michigan changed rapidly from pioneer to industrial society, young Jo Labadie, who was trilingual (English, French, and Pottawatomi), but with no formal education, learned the printing trade and went on the road as a “tramp printer,” in the Northeast. He joined printer’s unions in each city where he worked, before settling in Detroit in 1872. This youthful work and wandering formed an indelible mark on this “backwoods boy’s” sense of justice, illustrating clearly to him the disparities between the classes. His wandering lifestyle offered valuable lessons in class struggle and social justice.

Labadie’s affable nature gained him many friends in Detroit’s early labor movement in the 1870s, and he soon found himself at its forefront. He was an eloquent speaker, and always sported a graceful and clean cut appearance. His manner was forceful but pleasant and entertaining, characteristics which eventually earned him the nickname “the gentle anarchist.” Like most anarchists, there were contradictions between Labadie’s personal and political lives. He was an atheist legally married to a pious Catholic, his first cousin, Sophie Archambeau. However, this unlikely union seemed to pose no threat to his principles. Both Jo and Sophie remained true to their ideals, respectful of the other’s, and totally devoted to each other. Sophie, in fact, helped Jo by organizing and preserving the vast array of materials which would in 1912 become the birth of the Labadie Collection.

Although Labadie’s printing skills offered mainly itinerant work and a sporadic paycheck, it allowed him to promote his political ideology. He rallied around many causes of the day, including socialism, Greenbackism, the single-tax, and unionism, finding it “difficult to resist any project organized to cure society’s ills.”

He, along with fellow printer Judson Grenell, published a number of socialist newspapers and pamphlets, and early on was very active in the Socialist Labor Party. His indefatigable drive led to political and journalistic activity which would keep Labadie busy all his life, first as an ardent socialist, working to gain “more now” for all workers, then, by 1883, as an anarchist, “emerging as a proponent of extreme individual freedom in a stateless society.”

Anderson rightly questions some of Labadie’s inconsistencies, which ranged from reformist to revolutionary, pointing out curious un-anarchistic remarks and actions to reveal a paradox common among anarchists in capitalist society. “None of us are really anarchists, only believers in anarchism,” he explained. Anderson carefully maps for the reader Labadie’s political development, tracking his socialist tendencies and support of trade unionism to his eventual abhorrence of party politics and support of the natural laws of individualist anarchism.

Anderson traces the historic events of the day, from the post-civil war Panic of 1873, which lasted six years, to the antiunion fervor of the mid-1880s, culminating in the 1886 Haymarket tragedy, and Labadie’s reaction to these tumultuous times. After meeting Johann Most, following an 1883 Detroit speech by the German-born firebrand, Labadie defended the radical anarchist with uncharacteristically fierce rhetoric, signalling a turn in his own political thought.

After the executions of the four anarchists convicted of the Haymarket bombing, Labadie went head-to-head over the issue with those whom he previously thought were his closest allies. Even though the Haymarket martyrs hadn’t committed the crime for which they died, Labadie’s unflinching support of free speech led him to even promote bomb-making if it meant protecting the rights of workers to organize and speak freely.

His insistence on the right of individual expression frequently gained him public attention. Anderson describes an incident in 1908, when Labadie began pasting anarchist stickers on his correspondence before mailing. They were not the broadly interpreted and simplified circle A, but often quotations from venerable authors such as George Bernard Shaw and LaoTze.

The Detroit postal inspector, J.J. Larmour declared these pieces “unmailable.” Labadie protested and even the Detroit Journal, a mainstream daily, rallied to his cause, accusing the postal authorities of censorship. The inspector relented, and Labadie continued using the stickers.

A month later, Labadie was fired from his job at the Detroit water board because of his verbal and written attacks on the government. However, the authorities were forced to reinstate him after two weeks following a flood of protest supporting him. Although he was an anarchist, some of the city’s most powerful people spoke out or signed petitions protesting his dismissal.

Labadie’s convictions are well documented throughout his vast collection of correspondence. It is rare that such a comprehensive collection of a radical’s life remains, let alone is so well-preserved. Anderson uses them skillfully to describe his individualist anarchism, comparing it with the communist anarchism of Most, Emma Goldman and Lucy Parsons, all of whom Labadie knew, respected, and was influenced by.

Anderson’s portrayal of the Labadies could not be more insightful. Because of her place in the family, she not only had most of their papers, but also had knowledge of Jo’s disappointment in his children, and the siblings’ own feelings about each other. Her account of Labadie’s reflections in his later years are particularly poignant.

In 1911, Labadie donated his voluminous papers, correspondence, self-published pamphlets and poetry to the University of Michigan due to its proximity to his home, as well as its conservative reputation. Jo believed “old moss-back Michigan” could use a little balance on their shelves. Although the bulk of the Labadie Collection today remains anarchist, it also includes many other areas of social protest.

Anderson’s lively description of both large and small events in Labadie’s life makes for an engaging account of Detroit’s historic personalities and politics. This exciting volume has done a great service to the memory of an early anarchist and colorful character, Joseph Antoine Labadie, who has done more to inspire me than any of Detroit’s official labor leaders.

Note: This book is available from FE Books; see p. 28. Labadie Collection web site is at:

This exhibit traces the life and work of Agnes Inglis’s 28 years as the first curator of the Labadie Collection at the University of Michigan’s Special Collections Library. Using her network of friends and associates in the world of anarchism and socialism, Inglis (1870–1952), transformed the 1911 donation of Joseph Labadie into the country’s foremost archive of radical literature.