Thousands Rally to Stop Mumia’s Execution
April 24 in Philadelphia, San Francisco and Around the World

Sidebar: The Crucial Next Steps

On April 24, the 45th birthday of death row political prisoner Mumia Abu-Jamal, approximately 20,000 people gathered in Philadelphia and other cities, to demand a new trial for the former Black Panther and revolutionary journalist known as the “Voice of the Voiceless.” 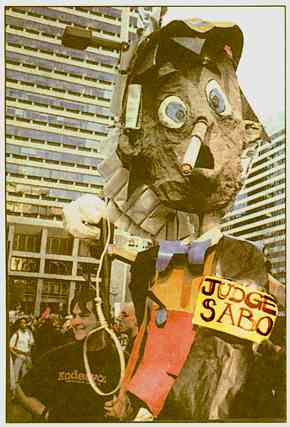 One of the many colorful, giant puppets which marched in Philadelphia April 24. Judge Albert Sabo is the hanging judge who sentenced Mumia to death in 1982 and then denied his appeal in 1995. photo/Julie Herrada

It was with some trepidation that I approached the City of Brotherly Love, since Philly’s police are notoriously brutal and are in a rage that Mumia might escape death at the hands of the state because of international protests. Although the police initially said they would only allow 500 people to march in a “ceremonial parade,” they relented under pressure and lifted the restriction.

The night before the march, every state and local politician who wanted to suck up to the cops attended a memorial dinner held for the police officer Mumia was convicted of killing. The head of the police union warned demonstrators to stay away from the $100 a plate gathering that was raising money for newspaper ads supporting Mumia’s execution.

The march, titled Millions for Mumia by its organizers, was plagued by predictions of rain, but the weather dawned so nicely the day of the march that I had no choice but to set aside my reservations and dive in. As the crowd of thousands lined up, it became clear to me that this event was not only about Mumia Abu-Jamal.

One of the most inspiring aspects of the march for me was the number of young people present. As today’ s youth turns increasingly materialistic, selfish, and violent, I was thrilled to see that some of the hip hop generation was making itself heard, loud and clear in Philadelphia.

It was. in two words that seem to cover just about everything, really cool. We were celebrating Mumia’s birthday and demanding that he be granted a new trial.

At the opening rally, which began in front of Philadelphia’s city hall, a range of speakers denounced the unjust trial and sentence for Mumia, who was convicted in 1982 for killing a police officer.

Speakers included Rage Against the Machine’s Zack de la Rocha, Pam Africa, Ramona Africa from the MOVE group that has suffered so much at the hands of the Philadelphia police, former political prisoner Geronimo Pratt, Robert Merepol, son of Julius and Ethel Rosenberg, comedian Dick Gregory and many others.

Mazi Jamal, gave a moving and tearful birthday salute to his imprisoned father, saying, “These aren’t tears of sadness that you see; they are tears of joy.” He told the crowd, “I just want to thank you for coming out here. Free Mumia. Free my pop!” There were also demonstrations in San Francisco, Amsterdam, Barcelona, Cork and Dublin, Ireland, Edmonton, Lisbon, London, Madrid, Oslo, San Juan, Rome and numerous other cities across the world. “Brick by Brick!”

There was a healthy and playful exchange going on in the plaza where t-shirt, political badge, along with pamphlet vendors and grassroots politicos exchanged wares and ideas. Young black women in preppy clothes and expensive gym shoes danced while young white guys with dreadlocks played makeshift drums and chanted “Free Mumia!” and “Brick by brick, wall by wall, we’re going to free Mumia Abu-Jamal.”

When the speakers started, the drumming and dancing subsided, but not so much that anyone would doubt we were there out of a sense of passion. As Emma Goldman said, “If I can’t dance, I don’t want to be in your revolution.” There seemed to be little danger of anyone dropping out of this revolution for lack of joy. After all, it was Mumia’s birthday.

Even the most solemn faction I saw, the Coalition to Stop Police Brutality, Repression and the Criminalization of a Generation, carried their huge banner with smiles. That was truly heartening, and spoke volumes about the hope they have, since their 15-foot-long banner bore the names of hundred of victims killed by police.

I scanned the banner and recognized a couple of high-profile cases, like Malice Green from Detroit, and Anthony Baez from the Bronx, but what struck me were the names of those I didn’t know; there were so many.

The march began after hours of speeches and snaked through the city with contingents from all around the country, and international delegates, including luminaries such as the wife of Francois Mitterrand, ex-president of France. Michigan was well represented by three bus loads of people from the Detroit/Ann Arbor area and numerous others who went by van and car.

The parade. primarily made up of demonstrators who were young and multiethnic, was loud and colorful, but uneventful. The Philadelphia cops were uncharacteristically unobtrusive, and there was not a single arrest. Even at the one spot with a large police presence, 13th and Locust, where the 1981 shooting of officer Daniel Faulkner and Mumia occurred, things remained calm, despite the occupation of the site by the cops.

March estimates went from a pitifully, ridiculous low of 3,000 made by the Associated Press, sent out to news wires across the country, to that of the march organizers, who stated 50,000 attended.

Everyone wonders what effect this international outpouring of protest will have on the pending execution of Mumia.

Rigged justice in Mumia’s case extended up to the Pennsylvania Supreme Court, which last year upheld his conviction in a trial that made a mockery of justice. Every official, including the Supreme Court justices, have a vested interest in Mumia’s execution—the mayor was the city DA at the time of the shooting, the present DA arraigned Mumia for the killing when she was a magistrate, and the Justice who announced the denial for a new trial was an assistant DA who prepared briefs against Mumia’s appeal.

Pro-death penalty Pennsylvania Gov. Thomas Ridge was undoubtedly waiting until after the march to set an execution date, but one is expected shortly. Mumia’s main attorney, Leonard Weinglass, has brought the case to federal court, which should begin another round of lengthy appeals. Hopefully, this will forestall the execution, but emergency actions are called for if a date is named.

The need for action is great, since one man’s fate is tied inextricably to the issues of the abolition of the death penalty, the Black Power movement, police brutality and youth activism. The importance of these issues cannot be overestimated.

As the hip hop generation comes of age, it does so with a jaded eye, and a distrust of those who carry out the laws, and also the weapons that are so easily abused. Because of this, it is crucial that young people are being heard.

The march in Philly should have received far more attention from the mainstream press than it did. Newspapers like The New York Times simply ignored it. They don’t seem to fear an angry populace in the boardrooms of corporate America where control of the powerful institutions of the media, police and legislatures is found. Yet people are starting to realize in greater and greater numbers that things are amiss. That’s what the Millions for Mumia march was all about.

The demonstration in the City of Brotherly Love showed that rather than imploding on our own communities the way riots or suburban detachment do, we found a way to gather peacefully, eloquently and without fear.

FE note: Our bookstore has Mumia’s writings and CDs; contact us for info.

Sidebar: The Crucial Next Steps

1. Be in Philadelphia for a July 4th Weekend march and organizers’ conference, plus civil disobedience at the Liberty Bell at noon on July 3. Be part of Philly Freedom Summer, June 28-July 11.

3. Organize plans to respond in your community if a new death warrant is signed for Mumia. Demonstrate the next day, 6:00 p.m., at local federal buildings and city halls. In Detroit, contact the Michigan Mumia Coalition at 313–8698383; nationally, Free Mumia Coalition at 212-330-8029; on the web at www.mumia.org

At the head of a sea of 20,000 protesters defending Mumia Abu-Jamal was the 300-strong International Longshore Workers Union ((ILWU) contingent chanting, “An injury to one is an injury to all, Free Mumia Abu-Jamal!”

Joining Bay Area members in the April 24 march were longshore workers and clerks from the ports of Sacramento, Los Angeles, Port Hueneme, and as far away as Seattle.

The maritime employers’ association objected, but every West Coast port was shut down from 8 a.m. to 6 p.m.

Messages of international dock workers’ solidarity came from Liverpool, Sweden, Denmark, Cyprus, Finland, Japan and from the 100,000 member teachers’ union in Rio de Janeiro, Brazil which struck for two hours the day before calling for freedom for Mumia.