Seattle
much more than a few broken windows

An Opening in the Clouds 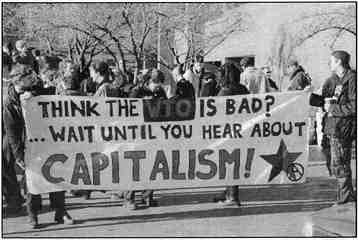 On November 30, 1999, a citizen uprising shut down the World Trade Organization and took over downtown Seattle, transforming it into a festival of resistance. Tens of thousands of people joined the nonviolent direct action blockade which encircled the WTO conference site, keeping the most powerful and undemocratic institution on earth shut down from dawn till dusk, despite an army of federal, state and local police, using tear gas, pepper spray, rubber, plastic and wooden bullets, concussion grenades and armored tanks in an attempt to control the crowds. However, people continued to resist throughout the week despite the clampdown which included mass arrests of nearly 600 people and government suspension of any pretense of civil rights.

Some of this was seen in the corporate mass media (though conveniently ignoring the worst police violence), but also disappeared was support the actions had from wide sectors of workers. Longshore workers shut down every West coast port from Alaska to Los Angeles. Large numbers of Seattle taxi drivers went on strike. All week, the Fire Fighters Union ignored the authorities’ requests to turn their fire hoses on people. Tens of thousands of working people skipped work, walking out or called in sick. Thousands of university and high school students also either walked out or skipped school.

People across the globe took action in solidarity with the demonstrations in Seattle. In India, thousands of farmers in Karnataka marched to Banglore and over a thousand villagers from Anjar (Narmada Valley) held a procession. Thousands took to the streets in the Philippines, Pakistan, France, UK, Portugal, across Europe, the United States and Canada.

75,000 people marched in 80 different French cities and 800 miners clashed with police. In Italy, the headquarters of the National Committee for Biosafety was occupied. In the period leading up to November 30 resistance increased: Nov. 16: occupation of the WTO’s world headquarters in Geneva; Nov. 22: Turkish peasants, environmentalists, and trade unionists marched to the capital of Ankara; Nov. 26a street party shut down traffic in New York City’s Times Square; Nov. 27: activists took over US Trade Representative Charlene Barshevski’s offices; 3,000 workers and students rallied in Seoul, Korea.

Another level of alliance was created in the streets as labor, neighbors and others joined together. Globalization hurts almost every sector of the population, giving us an opening to build a broad movement involving much of society and capable of standing up to corporate power and its governments. Direct democracy acted out a new world in the face of the anti-democratic WTO.

Affinity groups (small groups of 5–20 people), an organizational form borrowed from the Spanish anarchist movement during the early part of the century and used by direct action movements in recent decades, were adopted as the basic planning structure. (See p. 9, “How We Really Shut Down the WTO.”)

These groupings were coordinated by direct democracy spokescouncils and formed into clusters of several larger affinity groups to better coordinate actions. A positive culture of resistance was central. Street theater, music, marching bands, radical cheerleaders, giant puppets, singing was developed in the week before the WTO, as neighborhood processions and street parties were held across Seattle.

Intensive skills workshops were held for thousands the week leading up to the WTO. Jail and court solidarity -a strategy of staying organized and using noncooperation tactics in jail to win our demands-was used with some success. The jail guards, for example, met our short term demand for a spokescouncil between representatives from every cell holding protesters.

An Opening in the Clouds

The mass direct action and the new alliances formed in the streets and across international borders mark a hopeful escalation in a newly forming worldwide movement of resistance to corporate globalization and capital. This was the third internationally coordinated international action in 18 months. The first two were held in conjunction with G-8 meetings; one in Birmingham, UK in May 1998 and the other in Koln, Germany, June 18, 1999.

On June 18, tens of thousands of people took action in financial districts, banking centers and city centers around the globe-one hundred actions took place, and covered every continent. People’s Global Action, a loose international network of radical grassroots movements based heavily in the global south, was the coordinating body.

On November 30, people in Seattle took on global capital, joining movements around the world. Every sector of society expressed their dissent with the WTO: farmers and people of faith, students and trade unionists, animal rights activists and academics, and representatives from grassroots movements from every continent

The uprising against the WTO in the United States-the heart of corporate power-was a slap in the face of the ruling elite’s myth that corporate globalization (the audacious new strategy to further concentrate power and wealth) is inevitable; the myth that we are in an era of economic prosperity and people are content; and the myth that we are powerless to change much and can only attempt to do so through established channels, like the sideshow of electoral politics.

We have broken open a hole in the clouds of their gray, overcast sky of status quo myths. We have glimpsed hopeful sunlight reflecting the possibility of things being very different; that radical change, social revolution and a new world are possible.

As our memory fades, however, and everyone from corporate mass media to leftist pundits argue about broken glass in an attempt to sum up and define our experience, this historical opening in the sky threatens to close up with politics, dissent and life continuing as usual.

Fortunately, many inspired people are trying to climb into the clouds, hold it open and expand it, developing new forms of resistance and celebration, working with new people, groups and communities who are different than we are used to, and being strategic and innovative about figuring out how to change things.

“How We Really Shut down the WTO: In Seattle, training, and organization closed the streets and gives a guide for future actions,” in this issue.