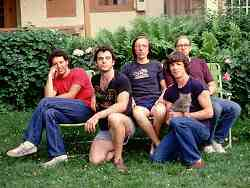 With a name like the Layabouts, it should come as no surprise that Detroit’s Cass Corridor premier anarchist dance band has taken 15 years to produce a follow-up recording to 1985’s blazing combination of infectious beats and insurrectionary lyrics, No Masters.

Yet, most fans of this group will agree that a Layabouts recording is a musical gift worth waiting for.

The years between their discs reflects that this phenomenal crew of activists and artists are not careerist celebrities, but friends who make music together for fun while maintaining commitments to families, jobs, and radical causes. And of course, The Layabouts recognize the virtues of laziness.

With founding members Alan and Ralph Franklin, Stephen Goodfellow, and Mel Rosas still carrying the torch and joined by keyboardist Jody Carlson, backup singers Sylvia Inwood and Peggy King, and Roberto Warren on congas, the Layabouts prove that neither time nor the fickle trends of the music industry can stifle the creative flame of committed musicians.

Long before the amorphous genre of “world music” had its own section at your local Tower Records, the Layabouts were cooking up a sizzling hybrid stew of musical styles that drew from Detroit’s own gritty urban guitar sound, English ska like the English Beat, political punk, reggae, salsa, and African jive, to name a few.

In the late 1980s and early 1990s, the Layabouts were perhaps best known for the sensual and sweaty, hip-shaking euphoria created by their devoted fans and political comrades who joined them at revolutionary dance parties to oppose US militarism in Central America, apartheid in South Africa, worldwide nuclear proliferation, and Detroit’s giant trash incinerator.

They were also fixtures at international anarchist gatherings held in Chicago, Minneapolis, and Toronto in the mid- and late-1980s.

Whether performing outdoors in a park, on downtown streets at a demonstration, or in a crowded bar, Layabouts gigs foster a sense of communal joy and energetic release, reminding all of us that dancing can heal us from the drudgeries of daily life and inspire us as we prepare to make revolution.

The Layabouts CD can be sampled and purchased at www.thelayabouts.com, or ordered from our book service on page 18.