Don’t Mourn—Organize!
Hundreds “Fiddle Down the FBI” on “Judi Bari Day” in Oakland

Note: As we go to press, the jury in the “Judi Bari vs. the FBI” case is still deliberating. During the rally discussed below, the lawyers for the defendants filed a motion to dismiss the case because the protest might unfairly influence jurors against the FBI. The judge, however, rejected this motion. By the time you read this, the case has probably been decided. Visit judibari.org for the latest. Photo by unruLEE. 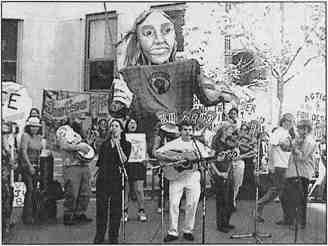 Judi loved to howl, so we howled for her, howled for fun, and howled for justice. May 24 marked exactly twelve years since a bomb ripped through Judi Bari and the car that she and Darryl Cherney were in. The motion-activated pipe—conveniently placed right under her driver’s seat—was intended to kill. Although lucky to survive, Judi lived with a limp and chronic pain until she died of breast cancer in March 1997.

May 24 also marked the sixth day of deliberations, after seven weeks of trial, for the jury before it returns its verdict in an historic trial against the FBI (and the Oakland Police Department)—for falsely arresting Judi and Darryl and violating their civil rights, for failing to go after the bomber(s), for obstructing justice and covering up their own illegal misconduct, for framing the victims as the perpetrators, and engaging in a new COINTELPRO against these peaceful eco-activists.

Judi was a union organizer, a feminist, an environmental activist, and a mother. She always took the time to make connections between work, welfare, war, and waste, to mention a few, recognizing the humanity of her fellow humans and the wildness of the wilderness, while injecting these often thorny issues with joy and humor. The bombing in 1990 slowed her down, but it never stopped her.

Like Joe Hill who urged before his own death, “Don’t mourn, organize,” and Mother Jones who counseled, “Pray for the dead and fight like hell for the living,” Judi was a tireless, pacifist fighter for the Earth and its inhabitants.

Her “revolutionary ecology” was her expression of love for life, especially the magnificent redwood trees that she chose to live among. This case against the FBI was important to Judi as yet another prong in the struggle for social and ecological justice. “This case is not just about me or Darryl or Earth First!,” Judi once said. “This case is about the rights of all political activists to engage in dissent without having to fear the government’s secret police.” Imploring the FBI to stop attacking activists, she always said that “the FBI should find the bomber and fire him.”

In honor of this auspicious day, we held a spirited rally in front of the Oakland Federal Building, where the trial is taking place, and not far from where Judi and Darryl were bombed. Physically gone, Judi and her spirit were there nevertheless.

While the cops watched, we were speaking, singing, dancing, howling, and proudly displaying our colors like political peacocks—in addition to distributing and sharing flyers and free bottles of organic tea. There were, of course, lots of fiddles and anyone who had a musical instrument was encouraged to join in. The rest of us sang along to such songs as “Fiddle Down the FBI,” a reference to the FBI having seized Judi’s childhood fiddle and never returning it, which included a chorus of “Fiddle up the justice/Fiddle down the lies/Fiddle up the truth/Fiddle down the FBI.” It was a rally, but it was also a festival, and we were all celebrating together. Amidst signs asking “Who Bombed Judi Bari?” and declaring that “You Can’t Bomb the Truth,” we sang. Across from posters referring to the FBI as “Forever Busting the Innocent” and “Fires, Bombing, and Intimidation,” we danced. And under banners urging us to “Rise Up” and that “Action is the antidote for despair,” we cheered.

Regardless of what decision the jury comes back with, as Darryl said in his speech, history will record that we are on the side of truth and justice and that the FBI is on the side of deception and repression. Naturally, we all howled.