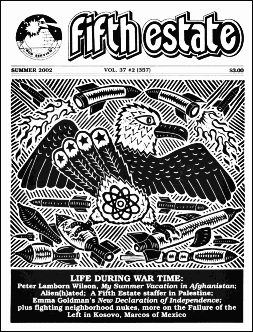 The magazine you hold in your hands represents the ongoing project of a dedicated group of individuals and the enduring vision of many more. Just a few months ago, it looked as though this anti-authoritarian publishing cooperative might retire after 37 years of, in the FBI’s assessment, “supporting the cause of revolution everywhere.” However, while the writers and activists in the Detroit collective have been unable to put out the paper on a regular schedule, their wish to see it continue led to passing the torch to a new editorial enclave based on the radical communes of rural Tennessee.

The hills and hollows of the mid-South—with their rustic yet lush, cooperative land experiments—are a long way geographically and culturally from the streets of Detroit’s Cass Corridor and the gritty basement offices that the Fifth Estate has called home since the 1960s. However, the same desires motivating the Detroit group to resist the megamachine in “the belly of the beast” for nearly four decades also inspire the humble yet festive version of anarchist utopianism practiced at Pumpkin Hollow, Short Mountain, Moonshadow, and IDA—the places from which the new editorial group draws its members. As we further the Fifth Estate legacy, we pledge to maintain the publication’s implacable opposition to authoritarian institutions and integrity as a volunteer-staffed and vigorously critical endeavor.

My first intimate contact with the Fifth Estate came at a pivotal time. It was early 1988, and I was twenty years old; I had just dropped out of college and moved to Detroit’s notoriously bohemian yet significantly dilapidated Cass Corridor. My then partner brought me to a basement office where an inspired crew of radicals as old as my parents were publishing an anti-authoritarian newspaper and planning protests against the giant trash incinerator the city was planning.

At the time, I knew little of this milieu’s history, but the energy of the place immediately attracted me. From my elder comrades, I developed habits of critical reading, principled writing, and fierce debating that I could not find in the university. From that time until I left Detroit in late 1994, my active involvement in the Fifth Estate collective fused with organizing numerous protests against the incinerator, the Gulf War, the auto industry, the city’s wealthy elite, and the general misery of modern life under capitalism.

During the same period, we started the 404 Willis and Trumbullplex collectives to provide venues for cultural activism, collective housing, and Food Not Bombs-style mutual aid for the neighborhood. Deciding to start a “permanent autonomous zone” in the backwoods of Tennessee, I had to learn to do activism in a dramatically different regional scene. But the experiences of my Detroit days and the influence of the Fifth Estate’s Detroit group on my writing, thinking, and politics remain.

As grim as the reality of the contemporary world appears, we all agree that the encroaching police state and illusion of unity in America—along with other sources of dismay such as the widening global gap between rich and poor—require us to intensify the project of radical resistance. The essential questions of how to live without war, corporations, prisons, police, and pollution compel us to action. The need for authentic freedom and cooperation between individuals and collectives who respect each other and the earth is as immediate as ever.

Some people expected the twenty-first century to look different from the twentieth. Activists who have devoted their lives to creative subversion and “speaking truth to power” must cultivate some hope in the face of unimaginable atrocity. Yet, the new millennium has not ushered in a New Age; instead, the political and social reality is more of a New Rage, fueled by old-time divisions of ethnicity, religion, and class.

The movements for an autonomous, compassionate culture have been unsuccessful at shifting social relations away from coercive power. Both the state and capital remain resilient. Neither violence nor nonviolence, neither agitation nor legislation, neither hope nor hype—none of this has unleashed universal noncooperation so far. While we cherish a few small victories for global justice in the streets, our movements have not significantly altered the fate for our brothers and sisters in the prisons and sweatshops or changed the future for our mountains and streams. Still, I’m encouraged by revolutionaries who venture down the future’s unpaved roads, armed only with an acute sense of “now or never.”

When you read this number 357 of the Fifth Estate, you may notice our new magazine format, a renewed commitment to maintaining our quarterly schedule, and the appearance of some new voices within our pages. More than this, we hope you see that the spirit that made this project both noteworthy and notorious in the past has not diminished. We want you to join us in maintaining a sustainable defiance and fervent opposition to the pernicious grip that the powerful hold on our planet’s future at the same time we nurture desires for a radically different world.