There is a Hebrew idiomatic expression, K’ninah Houra, which Joel Altus explained to me as sort of being equivalent to saying knock on wood after telling of some good fortune you have incurred and you want it not to change. 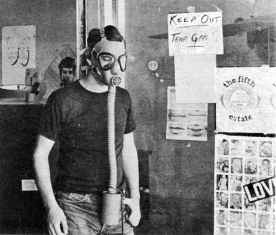 I certainly should have said aloud K’ninah Houra after writing in our last issue that no harm had come to the Fifth Estate office, Mixed Media bookstore or Plum Street. For no sooner had our issue hit the streets than pellets were shot at the windows of Mixed Media causing total damage. The window was replaced with boards and a sign which read “Holy Smoke, Don’t shoot—It’s Love.” Proprietor Barry Kramer assured us business will continue as usual.

Things went a little worse at the Fifth Estate office, however. We arrived at the office July 31 to find the interior of the building completely enveloped with tear gas fumes which attacked the eyes, nose and skin. It was “abandon ship” and the Fifth Estate really went underground for about a week as we set up our operations in the basement of the building.

Although there is no concrete proof as to who the villain was, circumstantial evidence does point to our guardians of law and order. First, the attack came at 1:30 a.m. several hours after the curfew when no one was out but the law. Second, the gas device used was of military origin and, with assistance from the overground press, the National Guard admitted that the Army had these devices and had used them in several East Side stores to flush out non-existent snipers. Third, Emil Bacilla and Tom Mitchell, who were upstairs from the office, saw a jeepload of Guardsmen out on the street approximately ten minutes before the gas grenade exploded. So, circumstantial, but...

Plum Street remained physically intact, but Ike Stein, proprietor of Little Things, was stopped and detained by Custom officials at the Windsor Tunnel because they thought he was H. Rap Brown! Big John from the Three Jacks Jewelry Shop was arrested and held at Jackson State Prison, when he was caught with fire bombs. Both men are out now.

Well, things appear to be back to normal and running smoothly—K’ninah Houra.