A call for support 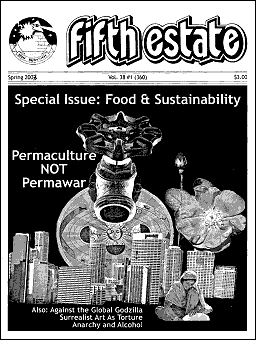 One year ago, when the Tennessee Collective stepped up to take over primary editorial responsibilities for the Fifth Estate, many of us were discouraged and disillusioned by the dreadful lack of public opposition to empire in the weeks and months following 9/11. One year ago, when we wrote about “the emergence of a mass-based movement...contesting the state and capital,” it was speculation. Today, the mass-based anti-war movement that boldly connects the dots between corporate tyranny and its bloodbaths is here.

As in its earliest days as a people’s press during the uprisings of the 1960s, Fifth Estate is a reliable voice among voices in visionary opposition to tyranny.

To continue with our quarterly schedule, to maintain our headquarters in the Tennessee hills, to expand distribution, to pay for printing and postage, to purchase office equipment and supplies, we need cash. As an exclusively volunteer-run and reader-supported magazine, we get no grants and pay no salaries.

A call for support

Each issue costs approximately $2,000 to print and mail. Day-to-day maintenance runs at approximately $2,000 per year. So, that’s a mere $10,000 annually that we need to keep going. However, our current subscription revenue falls short of that. So, that is why we want you to become a Fifth Estate sustainer today. Please pledge a flat dollar amount per issue or per year and send it to the Michigan address. You will then receive free stuff from us from time-to-time and get your magazine mailed first class the very day we get it back from the printer.

Other ways you can help include purchasing gift subscriptions for friends, buying books from our distro, hosting a Fifth Estate benefit in your community, promoting the publication on your e-mail lists and websites, or, simply adding money to your subscription renewal. Sometime this spring, our modest website filthestate.org should be up and running. Please link us from your home page! And, many thanks to those who have supported us over the years.

Finally, in a shameless attempt to fund the Bookstore in a Barn/FE HQ in Tennessee, we’re auctioning off 5 special care packages of books, zines, and CDs to the highest bidders. This care package will include a rare copy of an old FE, some contemporary activist music, and a sampling from our vast collection of underground ‘zines and ephemera. Bids may be made by email, snailmail (to the Tennessee address), or phone through Mayday. (Bids below $100 will be referred to the Dept. of Homeland Generosity).

We look forward to hearing from you soon!

This edition was produced during the last days of February 2003 on the eve of what looks like an almost certain U.S.-led invasion and occupation of Iraq. Despite worldwide opposition, the war fever in Washington continues unabated. The Empire, now with a Caligula figure on its throne, is mad with a desire to extend its direct control over the oil reserves of the Middle East.

The creative and massive protests calling for a stop to the impending slaughter is quickly transforming itself from a single issue movement into one which is challenging the entire planetary work/war machine. Even if we fail to stop this war, there are now millions of us ready to battle the entire system.

SEE YOU IN THE STREETS!