In early August 2003, African-American anarchist revolutionary Sherman Austin was sentenced to one year in jail, a $2000 fine, and three years probation. His crime? Being a black man who published a website with links to bomb-making information. 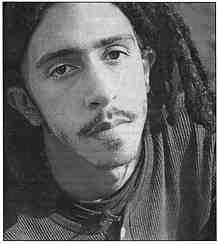 According to experts, the data Austin linked to is widely available—on the Internet and in public libraries. The state attacked Austin because he is black and because he is an anarchist.

In addition to his widespread support from activists, Austin has been noticed by online libertarians like the Electronic Freedom Foundation and rock stars like Zack DeLaRocha, who was scheduled to speak at a benefit for Austin in late August.

According to LA Indymedia, “The website attracted thousands of non-authoritarians and others that filled the exchange with their youthful energy and annoyed those charged with keeping perceived subversives, and their unacceptable independent thinking, in line.”

Clearly, the authorities hope this incident will discourage radical youth—especially radical youth of color—from participating in acts of defiance and self-defense.

Writer Jim Donahue argues, “The goal of the US ‘Justice’ system in this case is obviously not to protect the public from home-made explosives...While the official charges against Austin relate to providing information detrimental to public safety, RaisetheFist.com’s propagation of anarchism is undoubtedly the primary target of the government in persecuting him.”

Donahue continues, “An ideology that places the benefit of society and of each individual in it above the interests of the wealthy elite—in fact, which seeks to eliminate the latter so that the former may thrive—has no place in Amerika, the purported land of the free.”

Austin’s mother Ms. Jennifer Martin may have been hit hardest by what happened to her son: “...I had this idealistic attitude that the justice system would work. But I found out slowly, that it just eats away at your freedom and at your rights by pressuring you from all sides.”

A Senior Psychologist of the California State Prison System believes that “Mr. Austin is quiet and personally non aggressive,” and that Austin “is likely to become a victim by virtue of his youth...and more likely to become brutalized by the experience of prison than to learn from it.” In addition, the Psychologist recommended that Austin would benefit from performing extensive community service. Of course, we believe that Austin was already doing community service with his web-site!

“I think the criminal justice system is more like a system of organized crime for injustice, to basically benefit the people at the top,” explained Sherman during an interview with LA Indymedia.

Earlier in the summer, the same day that Austin’s sentencing was postponed for its final date, Attorney General John Ashcroft released a memo that asks prosecutors to monitor which judges impose lenient sentences. The memo also threatens putting merciful judges on a watch list.

Despite the intensity of the proceedings and weight of the charges against him, Sherman Austin has remained steadfast and strong. He’s prepared to surrender to the State as we go to press.

As committed revolutionaries working in media, we must never apologize for words that encourage freedom from racism, police brutality, war, and the selective attacks of John Ashcroft. We’re prepared to defend Sherman Austin as we defend ourselves. Free Sherman Now!

Please send donations and letters of support to: