The revolt against Sanchez

The campesinos take to the highways

Lessons from the uprising 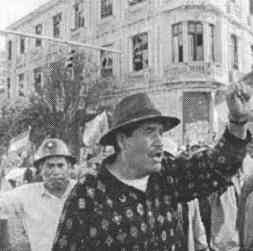 Teeming with tens of thousands of angry protesters and shaking from the resounding blasts of dynamite, the streets of La Paz on October 18th were the scene of a dramatic climax to six weeks of mounting protests. The universal demand was nothing less than the resignation of Bolivia’s president, Gonzalo Sanchez de Lozada. Later that afternoon, President Sanchez, his family, and remaining ministers fled to the United States.

The uprising in Bolivia was organized from the bottom up, with autonomous groups primarily made up of poor indigenous people carrying out militant civil disobedience. Over a period of six weeks, a few isolated protests turned into a mass uprising that left over 80 people dead (all but a few killed by the army or the police) and 400 people wounded.

Armed with sticks and stones, the protesters resisted tear gas, army tanks, machine gun fire, and even fighter jet planes to slowly bring the country to a standstill. Their unceasing pressure succeeded in ousting the president. While the uprising was truly nation-wide in scope, transcending ethnicity and class, there were two main groups that instigated the protests and were crucial to its success. The first group consisted of indigenous campesinos living in the rural areas around La Paz. And the second group consisted of the indigenous inhabitants of the city of El Alto.

The revolt against Sanchez

A millionaire businessman raised in the United States, Sanchez transformed the Bolivian economy into a neoliberal one, privatizing key industries such as oil, water, communications, mining and train transportation. As president, he oversaw the selling of gas rights to trans-nationals for near give-away prices. Then, against heavy opposition from the coca leaf harvesters, he kowtowed to Washington in implementing an unpopular coca eradication program. Just six months before the uprising, under pressure from the IMF, he introduced very unpopular austerity measures.

In the past 17 years of privatization, Bolivia has seen its standard of living drop and the gap between rich and poor widen. Approximately two-thirds of the population is indigenous and they earn substantially less than the mestizos (mixed race) and whites. Indigenous campesinos (poor farmers who barely subsist on small patches of land) are the poorest, earning roughly 15 cents a day.

While privatization has not passed unchallenged in Bolivia, the opposition has long been divided. When the protests started in early September, the demands varied among the different groups. However, as the protests gained steam, one demand became a lightning rod that helped unite the different sectors. This demand was that Bolivian natural gas not be sold to the US.

The campesinos take to the highways

The protests started off with a murmur back in the first week of September when campesinos started blockading highways outside of La Paz and another 2000 began a hunger strike. By the end of the second week of September, the blockades were already having a noticeable effect on La Paz. Initially, the army avoided confronting the blockaders. But then, the American ambassador Greenlee stepped into the picture.

On the morning of September 15, campesinos blockaded the only road out of Sorata, a sleepy tourist town. Around 200 foreign tourists had been trapped there for 5 days when Greenlee approached Sanchez and “convinced” him of the need to rescue the “hostages.” The following day, September 20th, a military convoy of over 20 vehicles loaded with soldiers and sharpshooters, with support from jet planes and helicopters, broke through the blockade, loaded up the stranded people in Sorata and turned around to return to La Paz.

It’s not clear who shot first, but this time as the convoy passed through the blockade, shooting broke out, and six apparently unarmed campesinos were killed along with an army conscript. Hours later, enraged campesinos stormed into Sorata and burned down both a government municipal building and the fancy hotel of an unpopular foreigner. In the more militant ‘communities, campesinos were now beginning to talk of a civil war.

In La Paz, there were food shortages and rising prices. Blockades multiplied in the rural areas outside of the city. The campesinos filled the roads with thousands of rocks and boulders. The army would send out troops with a bulldozer to clean the road; meanwhile, campesinos would gather in other stretches of the road and clog them up with more rocks. Campesinos also used dynamite to carve out wide trenches in the roads, rendering them impassable. By mid-October, stores in La Paz were running empty, prices for the remaining goods had doubled and tripled, and restaurants closed for lack of food and gas. But by this time, the war had moved to El Alto.

El Alto is the sister city of La Paz. With a population of around 1 million, it is said to be both the fastest growing city of South America and the poorest; 80% of the people identify as indigenous.

By the first week of October, many campesinos and miners had come to El Alto to directly pressure the government. Already radicalized by a strong working class consciousness, angered by the army’s violence and intimidation against the campesinos in the countryside, and strategically located next to La Paz, the Altenos (name given to the people of El Alto) were ready to rise up in a big way.

A wave of general strikes engulfed El Alto and La Paz in the three weeks after the violence outside of Sorata. On October 8th, two protesters were killed when the army broke through a blockade just outside El Alto. El Alto finally exploded on the night of October 12th. Resisting with only rocks and sticks, the protesters succeeded in stopping a gasoline convoy, but at the cost of at least five dead.

As news of the violence spread through the city, protesters and police clashed in other parts of the city. The police fired live ammunition and tear gas indiscriminately. Of the more than 20 civilians that died that night, some were killed in their houses by stray bullets. The next day, the heavily militarized convoy succeeded in reaching La Paz—but only after breaking through at least ten different blockades on its way through El Alto and leaving a bloody wake of 20 corpses.

The next day Sanchez declared martial law in El Alto. The deaths had an incredible effect on public opinion. Whereas before there had been a general sympathy for the protesters, they were now being called patriots—fighting so that Bolivian gas would be used to benefit all Bolivia. Even the conservative national newspapers were calling the government guilty of a massacre.

Local neighborhood assemblies were called throughout El Alto. Neighbors went from house to house calling on the residents to take to the streets. When the army went on house-to-house searches for union leaders, neighbors hid them or surrounded their houses to prevent their arrest. Organized by neighborhood, blockades multiplied throughout the city. Dynamite was used to carve out craters in the streets to prevent tanks from moving through the city.

The police and armed forces began to waver. Some police officers who lived in El Alto deserted. Witnesses claimed that a soldier was executed on the streets of El Alto for refusing to fire at protesters. Religious leaders, intellectuals, human rights activists, and more moderate leaders of the middle classes initiated hunger strikes throughout the country demanding the president’s resignation. And thousands of miners and campesinos were descending on the capital.

Lessons from the uprising

While the protests were not without their leaders, militant civil disobedience carried out by thousands of poor, indigenous rebels succeeded in bringing down the government. In the countryside, whole families camped out on the highways for six weeks, manning blockades in the face of army intimidation. In the streets of El Alto, protesters armed with only rocks and sticks resisted the advance of tanks and machine guns.

The ousting of President Sanchez was a stunning triumph for Bolivia’s indigenous people over a government totally unsympathetic to their needs. But Sanchez was only a figurehead. The real target of the uprising was the power behind him—the trans-nationals, the IMF, and the US—who were using Sanchez to extract as much as they could from Bolivia.

While not quite a revolution, the rebellion demonstrated a growing consciousness, unity, and collective power on the part of the country’s indigenous people. Most relevant, inspiring, and significant about the uprising were the incredible valor of the protesters, their autonomous manner of organizing, and the hugely successful techniques they employed.

Jeff McClelland can be reached at jeffmcclown@yahoo.com.