Resolve to Evolve
Miami and the Future of Resistance

Recently, the rulers of the Western Hemisphere met in Miami to continue negotiations on the Free Trade Area of the Americas (FTAA) treaty, another blatant power grab by the corporate oligarchy. At the summit, Nov. 17–21, trade ministers signed a watered-down compromise that again blunted US plans for hemispheric domination. This version, dubbed FTAA Lite by critics, allows nations to opt out of provisions they don’t care for, or in the case of Bolivia, Ecuador, and Venezuela, provisions that the outraged citizenry won’t stand for. With the collapse of the WTO talks in Cancun, the North American elite desperately needed to keep the FTAA alive, even if in a compromised form. As might have been expected, this conciliatory agreement has been spun as a victory by both negotiators and resisters alike.

While the trade ministers haggled over details, protesters faced severe police repression in the streets of Miami. Weeks before the official meetings and oppositional activity began, activists were already being demonized in the press and harassed in the streets. The week leading up to the main events saw increased repression as Miami Chief Pig and famed protest-hater John Timoney ramped up the rhetoric and harassment against what he called outsiders, hoodlums, and anarchists. 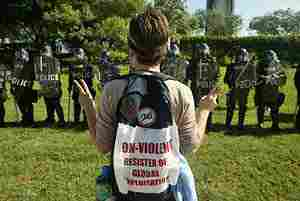 MIAMI—As the dust settled after another scuffle with the forces of empire, activists returned home to heal wounds and reflect on the continued struggle.

Miami exemplified the best and the worst, tyranny and resistance, control and rebellion, domination and mutual aid, authority and desire, terror and joy. It was a failure and a success, and it was neither. It was virtually ignored by the mainstream US media outside of Florida, even as the underground alternative buzzed and crackled with stories and calls for solidarity and action. Over a week of intense activity, activists employed many of the wide-ranging tactics for which our movement is known and the state responded with sweeping intimidation and unmitigated cruelty.

For days leading up to the FTAA meeting, police harassed and arrested activists. Once the protests fully kicked in, the scene looked like serious urban warfare. Regardless of context or alleged crime, the police behaved horribly and indiscriminately, even for cops: firing pepper spray and tear gas; shooting rubber bullets, beanbags, and tasers; dispersing crowds; beating people with batons; chasing protesters for blocks for no apparent reason; stealing and destroying media equipment.

During the buildup to the Thursday, November 20 battles, the atmosphere at the protest’s Convergence Center was hospitable and friendly, despite obvious paranoia. Activists stayed busy cooking food, making banners and signs, offering housing info, running the Indymedia center, working a small medical clinic, and generally socializing, networking, and sharing information. People even found time for workshops, films, and guerrilla gardening.

On the preceding Tuesday, hundreds joined the conclusion of the Root Cause People’s March for Global Justice, a 34 mile trek that had started two days earlier north of Miami. It was organized by several grassroots groups representing immigrant farm workers, poor people and people of color. It was a festive occasion despite a heavy police presence, and participants sang and danced to a sound system and drumming, and chanted their scorn for the rigged capitalist racket and its crooked politicians.

Thursday’s packed protest schedule included everything a revolutionary could ask for. An early morning unpermitted march—including the black bloc, puppetistas, the pagan cluster, and others—planned to take a shot at tearing down the fence. This spirited march was eventually corralled, attacked and forced back.

That afternoon, the permitted union march drew close to twenty thousand. At this AFL-CIO-sponsored event, the cops tried to stop some non-union protesters from participating. Some union members defended the right of all to march in unison while other bureaucrat march marshals played into the hands of Police Chief Timoney’s divide and conquer tactics.

Because of increased unprovoked and over-the-top police terror, the wrap up of the lively, legal march turned into another pig rampage. By day’s end, activists had attacked the fence and defended themselves by barricade-building, rock throwing, and dumpster burning. The day’s street fights continued into early evening, as masses of Robocops forced resisters to scatter and run. As darkness enveloped Miami, activists reported being hunted by roving bands of armored and armed thugs, often finding solidarity and assistance in a poor black neighborhood adjacent to downtown where residents advised people on the best escape routes.

On Friday, around 200 activists gathered at the Miami-Dade County Jail to hold a peaceful protest and demand the release of those who had been arrested the day before. In what has become a hallmark example of the extreme repression that global justice activists faced all week, the police demanded that the protesters disperse.

Afraid of more police violence and arbitrary arrests, the demonstrators moved down the street away from the jail site, but were immediately surrounded by over 600 riot police. The cops attacked the dispersing crowd, chasing people into a corner. They shoved them to the ground, beat them and gassed them at close range. They arrested around 60 people, including journalists, legal observers, and medics.

Once in jail, some activists were targeted for even more harassment. People of color, queers, and those refusing to give names or nationalities were kept in extremely cold cells without toilets, beaten, and soaked with water. By the end of the week there were at least 270 arrests, over one hundred demonstrators treated by street medics, plus 12 hospitalized with three facing life threatening injuries. One New Jersey activist died from a suspicious viral meningitis infection on his way home from Florida. Immediately, spontaneous fund-raisers, legal alerts, and solidarity calls abounded on the Internet.

If the Miami protest was a tactical defeat for FTAA opponents, it was not a total defeat. If one of our goals was to shut down the city, the cops did that for us, even though this probably hurt small business owners more than the big banks that inhabit Miami. Clearly, the system sees the oppositional movement as a force to be reckoned with, this time demonstrated by the overblown demonizing and lies that filled the local media and the brute force used to suppress dissent.

What are the implications of Miami for the future? At these huge events, the direct action and anarchist wings of the North American radical social and ecological movements have to fess up to the reality that we have lost the element of surprise and will not gain it back any time soon. Our movement needs to rethink strategy and tactics. There’s nothing radical or militant about being constantly coerced, corralled, attacked, and contained by the armed sadists hired to protect the rich and squash rebellion.

Rather than abandon mass protests at these corporate globalization summits and political conventions, we need to rethink our approach to them. We need these mass gatherings more than ever. However, we should never march into a preordained slaughter, to simply welcome defeat by the overwhelming forces of brutal repression organized by the security state. How can we remain vitally public with our opposition and avoid unnecessary arrests, injuries, and drains on resources due to travel, bail, fines, hospital bills and so on?

For the immediate future, people with more militant perspectives and desires need new outlets. They might consider becoming more autonomous and decentralized for affinity group actions and nocturnal subversions where people won’t get caught. People have only begun to explore the tactic of flash-mobbing as a way to revive the element of surprise. During the day, is there any harm in joining and marching with mainstream groups in permitted events?

Perhaps it’s time for some old school soapboxing, leafleting, and street-preaching, spreading radical propaganda and ideas. We have our work cut out for us to unravel the wretched rumors and feeble accusations the mainstream media has peddled about radicals and anarchists. The anti-anarchist smear campaign-must be countered with grassroots education and propaganda as well as attempts to use and/or subvert the mainstream and corporate media.

Let’s continue to use convergences to focus on skill-sharing and creating the new world in the shell of the old: gardens, homes, alternative economies, bikes, really free markets, free skools, carnivals, etc. Let’s illustrate our alternatives to global capitalism, patriarchy, and the supremacy of the market by promoting permaculture, potlatches, bioregionalism, mutual aid, localization, and more with festive celebrations of culture, diversity and resistance.

Of course, governments and economic tyrannies don’t fall by themselves. The most committed and heroic gestures will always have their place in our revolutionary milieu. When we have the numbers and the strategic need to fight the cops, let’s be well-trained, well-coordinated, ready to subvert the security apparatus, and win. In the meantime, lets continue to build trust and solidarity in our movement. Under the Bush regime, the so-called Left is more united than it has been in decades. Our alliances with groups like Amnesty International, ACLU, and the National Lawyers Guild should be nurtured as we turn the public’s focus away from irrational fear of protesters to legitimate rage at the State’s brutality. This will be a long, protracted revolutionary struggle—not simply a convergence-hopping fetish for weekend warriors. We need to drop those more-radical-than-thou pretensions and find natural affinities across superficial social, ideological, and generational divides....

Our goal is to challenge and eventually subvert an integrated, complex, and fairly well-organized $ystem. We can expect no safe haven on militarized turf, and we must protect our autonomous zones. Work with all forms of resisters by day and carefully take actions with your tightest crews at night. With reflection and humility, we can resolve to evolve new tactics to take on the empire.

Their fear of our movement is a fear of the future where finally, the earth will be respected and shared by all and all the world’s inhabitants will live free.

For more information, check out these websites:

See related stories in this issue: