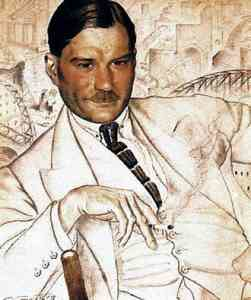 FE notes: The following passage is from Evgeny Zamyatin’s dystopian sci-fi satire We (1919).

Zamyatin, a naval engineer who specialized in building ice-breakers, had been imprisoned and driven into exile twice by the tzarist regime for subversive activity. During World War 1, he was an enthusiastic supporter of the revolutionary communist underground and was persecuted for antimilitarist activities.

He became disaffected with the Bolsheviks soon after the Russian Revolution and he began to publish critiques of Lenin’s increasing use of coercion to create totalitarian conformity. Soviet censors banned We after its publication in a Czechoslovakian journal in 1924. When Zamyatin was officially declared a non-person by the State, he wrote to Stalin in 1931 and demanded to be deported. He died in France six years later.

Let me tell you about the Day of Unanimity, about that Great Day. I have loved it since childhood. Tomorrow, I will see the same spectacle which we see year after year, and which always awakes in us excitingly fresh emotions, as if we saw if for the first time: the mighty chalice of accord, an impressive throng of arms raised in reverence.

Tomorrow is the day of the yearly election of the Great Benefactor. Tomorrow we shall hand over to our Great Benefactor the keys to the impregnable fortress of our happiness for the forty-eighth time. Certainly, this in no way resembles the disorderly, unorganized election days of the ancients, on which (it seems so funny!) they did not even know in advance the result of the election. To build a state on some non-discountable contingencies, to build blindly—what could be more nonsensical? Yet centuries had to pass before this was understood.

The elections themselves have a symbolic meaning. They remind us that we are a united, powerful organism of millions of cells. The history of the United State knows not a single case in which upon this solemn day even a solitary voice has dared to violate the magnificent unison.

Even if someone were to imagine the impossible—that is, the outbreak of some dissonance in our customary united monophony—then our unseen Guardians are always right there among us, are they not? They can immediately identify those who might fall into error and save them from any further false steps and save the United State.