Speaking to the Beast
an excerpt from Against His-story, Against Leviathan 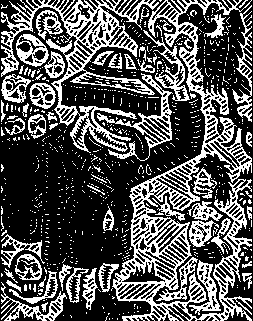 Who, then, is the wrecker of the Biosphere? Turner points at the Western Spirit. This is the hero who pits himself against the Wilderness, who calls for a war of extermination by Spirit against Nature, Soul against Body, Technology against the Biosphere, Civilization against Mother Earth, god against all.

If Toynbee’s protagonist, Mankind, is too diffuse, many of the others are too narrow.

The Marxists see only the mote in the enemy’s eye. They supplant their villain with a hero, the Anti-capitalist mode of production, the Revolutionary Establishment. They fail to see that their hero is the very same “shape with lion body and the head of a man, a gaze blank and pitiless as the sun.” They fail to see that the Anti-capitalist mode of production wants only to outrun its brother in wrecking the Biosphere.

It is my aim to speak of the beast’s body. For it does have a body, a monstrous body, a body that has become more powerful than the Biosphere. It may be a body without any life of its own. It may be a dead thing, a huge cadaver. It may move its slow thighs only when living beings inhabit it. Nevertheless, its body is what does the wrecking.

If the Biosphere is an excrescence on the planet’s surface, the beast that is wrecking her is also an excrescence. The Earthwrecker is a rust or halo on the surface of a human community. It is not excreted by every community, by Mankind. Toynbee himself puts the blame on a tiny minority, on very few communities. Perhaps the cadaverous beast was excreted by only one community among the myriads.

The secret is out. Birds are free until people cage them. The Biosphere, Mother Earth herself, is free when she moistens herself, when she sprawls in the sun and lets her skin erupt with vari-colored hair teeming with crawlers and fliers. She is not determined by anything beyond her own nature or being until another sphere of equal magnitude crashes into her, or until a cadaverous beast cuts into her skin and rends her bowels.

Trees, fish and insects are free as they grow from seed to maturity, each realizing its own potential, its wish—until the insect’s freedom is curtailed by the bird’s. The eaten insect has made a gift of its freedom to the bird’s freedom. The bird, in its turn, drops and manures the seed of the insect’s favorite plant, enhancing the freedom of the insect’s heirs.

The state of nature is a community of freedoms.

Such was the environment of the first human communities, and such it remained for thousands of generations.

Modern anthropologists who carry Gulag in their brains reduce such human communities to the motions that look most like work, and give the name Gatherers to people who pick and sometimes store their favorite foods. A bank clerk would call such communities Savings Banks!

The zeks on a coffee plantation in Guatemala are Gatherers, and the anthropologist is a Savings Bank. Their free ancestors had more important things to do.