Segregation Rising
...and the Strategy to Leave Children Behind

While attending a meeting in Gainesville, Georgia to learn about the horrific effects of environmental racism, the conversation quickly turned to education. For decades African Americans have been fighting pollution and coping with obscene leukemia rates in their community in this city of 25,000 residents. That day, they vented about the local public school system and the intensification of segregation in schools. They know segregation is a device designed to limit their community’s access to the tools and services needed to have a decent life. 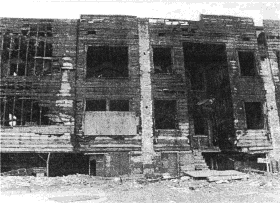 Urban Public School Reality: this dilapidated structure has teetered for a few years, only fifty feet from the fenced-in playground of Detroit’s Dewey Center for Education (at Martin Luther King and the John Lodge Freeway). Photo: Cassie Shook

The public school system in Selma, Alabama is now about 95% African-American with white parents putting their children in private schools. In Charlotte, N.C. a city that once used bussing to integrate its schools—only about half of the schools are now considered diverse, down from a high of nearly 90 percent in the 1980s. More than 1 in 3 Latino students attends a school with minority enrollment of more than 90 percent—a ratio that compares with that for black students. These trends are not limited to the South; white parents in places like Lynn, Massachusetts have hired lawyers to fight desegregation, arguing against the desirability of diversity. Nearby Boston, the city infamous for the anti-bussing madness in the 1970’s, remains a segregated mess.

Fifty years after the Brown v. Board of Education ruling against school segregation, the racism that still dominates the United States has found plenty of ways to turn the clocks back. Whites have sought and won numerous court rulings against integration, used white flight to avoid exposing their kids to children of color, placed children in white supremacist private schools and home school environments, successfully fought “multiculturalism,” used violence and intimidation, manipulated disciplinary rules to help white students get ahead, and even boldly declare white-only space, such as the white-only prom held a few years ago in Georgia.

A Harvard Civil Rights Project report [Why Segregation Matters: Poverty and Educational Inequality--PDF] sums up the toll; “The vast majority of intensely segregated minority schools face conditions of concentrated poverty, which are powerfully related to unequal educational opportunity. Students in segregated minority schools face conditions that students in segregated white schools seldom experience.” According to Gary Orfield, Co-Director of the Project, “Segregation and discrimination are not relics of the past and are not benign. Blacks and Latinos in segregated schools struggle in environments of concentrated poverty, with fewer certified teachers and lower educational achievement.”

“Schools are still like prisons, because we don’t learn how to live”

Segregation is merely one tool of an educational system based on maintaining white supremacy. Criminalization through punishment and confinement are important components of furthering a separate and unequal society. Thus, Black men are more likely to receive a prison sentence than a higher education, mostly for non-violent “offenses.” The manufacturing of a large prison population of color begins at an early age with Zero Tolerance laws written and interpreted to promote disciplinary apartheid.

Here in Tennessee, for example, the Tennessee Commission on Children and Youth thoroughly examined the Disproportionate Minority Confinement Data in 1998. They found that African-American youth were overrepresented for confinement to secure facilities at nearly four times their representation in the youth population in 1998. White youths were never overrepresented in secure facilities. Eighty percent of juveniles transferred to adult court in Tennessee in 1995 were African-American. The report concludes, “Without a doubt, minority youth are overrepresented at all stages of the juvenile justice process. This is especially evident in secure-confinement facilities, with the degree of over-representation being lowest at the point of arrest and increasing at each subsequent stage.”

The situation in neighboring Georgia (like almost every state in the country) is also frightening. According to the US Department of Justice and Georgia Department of Juvenile Justice records, 75% of the children locked up in juvenile jails across the state are being held for non-violent offenses.

Although African Americans constitute less than 25% of the state’s population, 65% of the kids locked up are African American males. The schools in Georgia’s youth jails aren’t accredited, so the young, school-age inmates continue to fall behind academically. Worst yet, while confined, these children are subjected to physical abuse, rape and other mistreatment that the federal government has called “egregious and unconstitutional”.

While non-violent offenses constitute an undue proportion of punishment, Black students who have fought back to defend themselves from pervasive violence and intimidation in schools have been disproportionately punished and labeled “violent” in a culture that thrives on nightly TV infotainment “news” broad-casts portraying non-whites as violent. Students facing racism in schools have a more difficult time focusing on learning. This spring, while traveling in rural Kentucky, I came across a story about white students passing out pro-slavery propaganda in their high schools such as “Federal Nigger Hunting Licenses”. A student who said African Americans constantly face such intimidation which make getting through such high schools extremely difficult reportedly shoved a white student who was passing out such abhorrent papers. For his “fighting” he was expelled from school, while the white student who also fought received only three days suspension.

Black students are also more likely to be segregated out after receiving disproportionate diagnoses of mental illnesses. When compared with their white counterparts, African American children were almost three times more likely to be labeled “mentally retarded,” according to a paper by Thomas B. Parrish, managing research scientist at the American Institutes of Research.

Discrimination continues as students get older and try to navigate higher education. The backlash against affirmative action has whittled away the one remedy that began to address inequality in education. In Washington and California, “minority” enrollment in universities has declined sharply in recent years thanks to racist propositions passed by voters. Meanwhile, legacy policies that grant easier enrollment to privileged children of alumni help the underachievers like George W. Bush who would not have otherwise been able to attend Yale. Similarly, tens of thousands of immigrants are denied access to higher education through legal obstacles. The proposed Dream Act seeks to help remedy this, but it faces opposition from racist politicians.

As higher education costs have skyrocketed, class discrimination has made access even harder for non-whites. Statistics portray economic realities of a society that has never been “separate but equal.” The net worth of a white family is more than eight times greater than an African American family; compared to Latinos, it is 27 times higher. Nearly three-quarters of whites own their homes; for African Americans and Latinos, less than 50% do. Discriminatory lending and employment practices continue. 40 years ago Blacks earned 55 cents to the white dollar; today, despite the civil rights movement and political pressure for change, that figure has only increased to 57 cents.

While running for Congress in 1964, George Bush Senior’s comments summed up the barely veiled plans of the ruling class to undermine the efforts of every freedom ride and attempt to end white supremacy. He said “the new Civil Rights Act was passed to protect 14% of the population; I’m worried about the other 86%.” It is no surprise that the response to integration by the white supremacist establishment was to evolve new forms of segregation. The country was founded on genocide and built on the backs of slaves who were denied access to education. Bush the 2nd touts No Child Left Behind and trots out his token people of color in his cabinet to pretend he wants education for all, but like his other Orwellian programs he is really continuing the historical imperative of the white supremacist capitalist system to keep people of color undereducated.

Of course there have been improvements in the US: officially, “whites only” signs have come down. Gains have been won through intense struggle and bloodshed. Film, music, theater, literature and other cultural expressions challenge racism. Some schools even acknowledge something called Black History. Yet the statistics cited above reflect a society determined to maintain segregation and an underclass.

Challenging the laws, attitudes, and economic disparity that are the cornerstones of a white supremacist education system are crucial. Yet this is different than concluding that all people of color want to be integrated into such a system. It is important to break down barriers to educational access while also recognizing that respect for communities’ self-determination goes hand in hand with supporting those who choose not to integrate into a racist system. As slavery and Jim Crow laws demanded revolts and solidarity from people of conscience, so does institutionalized racism and persistent segregation call for outrage and support for people of color who seek basic survival—food, health care, shelter, education, etc.—for their communities free from police repression and hate.

For white folks like me, this necessitates breaking from our addiction to the white world we were born in. It means constantly evaluating activism through lenses that illuminate whether we are undermining or upholding white supremacy. It means recognizing defensiveness we feel when challenged and learning to transform it into a force of revolutionary change. It does not mean we abandon anarchism for a progressive reformism based in public institutions. It doesn’t necessarily mean joining the school board or supporting questionable institutions without question. However it probably means living with some contradictions in our politics. At times, choosing to be an ally is more important than maintaining ideological purity.

For me, desegregation begins with decolonizing my own consciousness and continuing education. The more self-critical, anti-racist, and aware the education, the better prepared I am to assist in struggles to challenge white supremacy in all its obscene forms of domination.