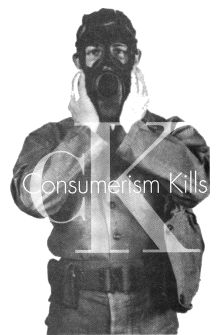 This issue on economy marks the Fifth Estate’s last edition of 2004, and as we approach our 40th anniversary edition, it feels critical to consider the decision we made 30 years ago to become explicitly anti-authoritarian and anti-capitalist.

For a brief period in the early 1970s, FE flirted with the kind of alternative journalism that we expect from weeklies like Nashville Scene, Detroit’s Metro Times, and the hundreds of other free papers of that ilk. During this time, FE also attempted to run itself as a business. This phase of the project was a failure. To mark “the last issue of the FE as a capitalist enterprise,” the volunteer editors who had been working together as the Eat The Rich Gang (some still involved in the project), made a series of decisions that we affirm today.

In 1975, the Fifth Estate collective refused to accept paid advertising and switched from a weekly to a monthly production schedule. The editorial collective of 1975 proclaimed: “The current staff has no sympathy with the Fifth Estate as simply another commodity sold in the marketplace ... We compromise every-day of our lives under capitalism-when we alienate our labor on the job for wages, when we put up with the authority of others over us, and when the potential for human community and individual development is thwarted by the tyranny of capital. We don’t want to compromise on a project which contends that it is tied to new ideas and new ways of living.”

To this day, we maintain our commitment to working as volunteers and accepting donations but not paid ads. (We will make an exception: with our fundraising effort for the anniversary issue, we’re seeking de-classified ads (see page 4). As one collective member recently described it, “This has always been a project too valuable to contaminate with wage work. If you really believe in something, it is always worth doing for free”

Not only do we refuse wages for the writing and art that appears in the Fifth Estate, we also refuse to copyright our work.

Even though our $3 cover price and $10 subscription rate are surprisingly low, we’ve decided not to raise those rates for now. While we believe that asking for money for the magazine is necessary, we also desire a publication that is affordable and accessible to all.

The ideas and theories that define our economy section reflect the manner in which we manage this project on a day-to-day basis. In a spirit of collaboration and anti-capitalism, we work for the day when this publication is unnecessary, when authority is abolished and these dreams are realized.

No copyright. No paid staff.