How to Support Anti-War GIs

As Bush’s Iraq quagmire begins to take on the same qualities as the war in Vietnam—fighting an insurgent population, mounting US casualties, increased slaughter of civilians, destruction of the country to “save it,” no exit strategy—so, too, does military opposition. 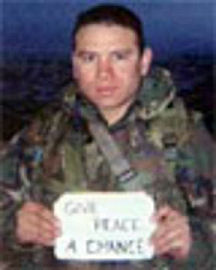 Ex-Sgt. Camilo Mejia holding an anti-war sign in Iraq. After refusing to report for duty, he was sentenced to a year in jail.

A so far small but vocal group of ex-soldiers has formed Iraq Veterans Against the War (IVAW), echoing the larger Vietnam vet anti-war organization which in that era had a tremendous impact on public consciousness. Mike Hoffman, an ex-combat Marine from Pennsylvania quoted in the November-December edition of Mother Jones magazine, talked about some of the emotions which led him to take political action against the war.

“I came home and read that six children were killed in an artillery strike near where I was,” he told the liberal magazine. “I don’t really know if that was my unit or a British unit, but I feel responsible for everything that happened when I was there.”

The IVAW have an opportunity to create the same impact as the group for which John Kerry was an eloquent spokesperson in his 1971 congressional testimony regarding US war crimes in Vietnam. This will become even more painfully the case as the war worsens and casualties mount. The group can be reached at www.ivaw.net.

Another group of Iraq war vets, Operation Truth, was founded by Paul Rieckhoff, a former 1st lieutenant, who served as a platoon leader in the 3rd Infantry and 1st Armored Divisions. They explain their mission as “educating the American public about the truth of the wars in Iraq and Afghanistan from the perspective of the soldiers who have experienced them first-hand.” They are online at www.optruth.org

Also prominent in fighting the illegal U.S. war against Iraq are several groups comprised of military families with children or spouses in the conflict. These include Bring Them Home Now, the project of two anti-war organizations—Military Families Speak Out and Veterans for Peace—and has seen its membership soar to more than 700 families over the course of the war. They can be reached at

Sgt. Camilo Mejia, mentioned above, is being actively supported by Citizen Soldier, an anti-war, GI advocacy group, which has launched a campaign to free the imprisoned officer. A national coordinating committee met in early November near Ft. Sill, Oklahoma, where Mejia is imprisoned, to coordinate a national strategy to bring his case to public attention. Contact them at

Besides the two GIs who fled to Canada mentioned in the article on this page, at least four others have sought similar refuge.

Draft dodging, deserting one’s national army, and mutinies have all played historically honorable roles in resistance to war. Many immigrants to the US were fleeing forced conscription in the countries they left.

Blind obedience is to be reviled. Support GI resistance. Some people have questioned what to do next following Bush’s election; supporting these courageous men and women is one thing we can do.

Note: The FE sends free subscriptions to GIs. During the Vietnam War thousands of soldiers read the paper in barracks, on board ships, and on the battlefield.