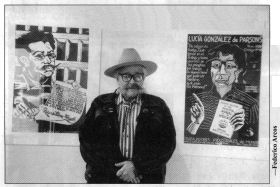 Poet, revolutionary, artist--an inspiration to three generations of radicals in the struggle for a better world--Carlos Cortez died in his sleep at his home in Chicago on January 18, after an illness that had long confined him to a wheelchair; he was 81. A member of the Industrial Workers of the World (IWW) for nearly sixty years, with red card number X321826, he remained to the end a fervent supporter of working class self-emancipation and an irreconcilable enemy of capitalism and the state. Fellow Worker Cortez died like a good Wobbly, with his union dues paid up.

The following Saturday, some 500 friends and fellow workers--many from out of state--braved Chicago’s worst blizzard in years for a last visit to Carlos’s studio.

Born and raised in Milwaukee, Carlos was the son of a Mexican-born, Native American Wobbly father and a German-American Debsian socialist-pacifist mother. Non-dogmatic radicals, the Cortezes were active in a wide range of groups, from the Socialist Party to the Fellowship of Reconciliation. Opposition to militarism was a family tradition. Convinced that it was wrong for workers to shoot workers of other countries in the wars periodically concocted by profiteers and politicians, Carlos served eighteen months as a war resister in the federal penitentiary at Sandstone, Minnesota, during World War II. Shortly after completing his sentence, in 1947, he lined up in the IWW. The Industrial Worker was soon running his cartoons, and in the early 1950s, began featuring his poetry and articles as well.

Organizationally, the IWW remained Carlos’s main focus, but he was also active in other groups, including the New York-based anarchist/communist Libertarian League, Chicano and Native American groups, several radical arts groups, the civil rights and antiwar movements, and labor-support activity (most notably for the United Farm Workers).

In the 1970s, when the old Wobbly Fred Thompson took the initiative in reviving the world’s oldest working class publishing house, the Charles H. Kerr Company (est. 1886), Carlos became a vigorous supporter, and one of the firm’s mainstays, serving as president of its board of directors since 1993. His studio was the Kerr board’s regular meeting place.

Over the years Carlos made a living, as the expression goes, at various so-called unskilled jobs, from construction work to janitor. His real work, however, was his Wobbly activism, his writing, and his art, from which he derived little income.

The Kerr Company has published two books of his poems and art: Crystal-Gazing the Amber Fluid, introduced by Eugene Nelson (1990), and Where Are the Voices? & Other Wobbly Poems, introduced by Archie Green (1997). In 2002, Carlos also edited and introduced the book Viva Posada!--A Salute to the Great Printmaker of the Mexican Revolution, a centennial tribute, with contributions by many poets, artists and activists.

The forthcoming centennial comic book, The Wobblies: A Graphic History of the IWW, edited by Paul Buhle and Nicole Schulman (Verso Books), includes a page by Carlos.

These books, his other writings, and his powerful art make up a large part of what his close and longtime friend Federico Arcos has called the “vital and important legacy” of Carlos Cortez.

FE Note: For a complete list of titles by Carlos Cortez, plus other IWW and radical labor writers, contact Charles H. Kerr Publishing Co., 1740, W. Greenleaf Ave., Chicago IL 60626. Also, expect more on Cortez in our next edition, #370, “Wobblies and Work” issue. By then we should also have a solid sampling of his work for sale in The Barn.