When small political groupings of people raise the possession of weapons to the level of military strategies and tactics, rather than the need for protecting their personal security, it usually guarantees the reverse.

By 1969, the Fifth Estate founder, feeling increasingly isolated by the radical fervor of the staff, quit the paper following his disagreement with a vote to print a front cover taken from a Cuban poster featuring an array of guns and the quintessential one-word slogan of revolutionary impatience, “NOW!,” in four-inch type.

As the 1960s drew to a close, violence throughout society became increasingly intense as hundreds of urban uprisings (including a massive one in Detroit in 1967) the assassinations of public officials, and the murderous repression of dissidents left the Fifth Estate staff feeling vulnerable in its public office. We also had a desire to be serious revolutionaries as committed to armed struggle as were the guerrillas the paper supported around the world. 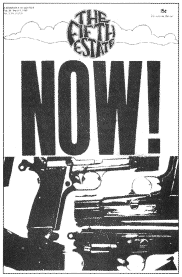 After the windows of the FE offices were partially broken by bricks thrown by a local fascist outfit that issued death threats against the staff, and three members of a socialist party were gunned down in a nearby office by a right-wing fanatic, leaving one dead, our headquarters began to bristle with armaments. Several desks had racks mounted on them holding what Detroiters call, “woofers;” 20-gauge sawed-off shotguns, which can do incredible damage in a small space.

Fortunately, the only time anyone pulled a gun is when a hapless reporter from Rolling Stone magazine came by the office unannounced, looking too “straight” (then meaning, short hair, no beard or mustache, neatly dressed). In his account, printed in the October 4, 1969 edition of what was then a tabloid, John Burks, wrote, “[A staff member] greets me with a shotgun leveled at about my right knee.” The event ended happily with a favorable article about the Fifth Estate being an important component of the Underground Press movement.

Several staff members possessed a variety of weapons, some sleeping with long guns under their beds or with pistols at easy reach. Not wanting to be labeled part of the “lollipop left,” (a militant black’s description of those whites unwilling to take part in armed self-defense), one late night, following a call for armed assistance from the local Black Panther Party, several FE staff members showed up on an inner-city Detroit street, each with a loaded carbine.

Fortunately for everyone, nothing resulted, but if the kill-crazy Detroit cops would have happened upon this revolutionary contingent, a major incident could have occurred.

The Fifth Estate long ago gave up its gun fetish along with calls for armed struggle. When the paper received its Red Squad files back from the Detroit and Michigan State police following a 1970s law suit, every mention of guns and violence (and there were many), even karate lessons, was circled in red--part of a dossier that would justify violent police repression.

When small political groupings of people raise the possession of weapons to the level of military strategies and tactics, rather than the need for protecting their personal security, it usually guarantees the reverse. One need only look at the experience of the Black Panthers, the MOVE commune (groups with many admirable aspects) or the kooky Branch Davidians at Waco, Texas to know that making a lot of noise about weaponry is a cop magnet. In Detroit, we call that “selling wolf tickets,” ones that the cops are always more than willing to buy up.

Healthy organisms defend themselves reflexively. Let’s organize our communities, know the history of how vicious the state becomes when challenged, but talk only of guns in an appropriate context. At a point when we have little more than our desires as a thin reed of hope for the future, such talk today is at best braggadocio and, at worse, dangerous.