A Short History of our Offices as Autonomous Zones

Hakim Bey, whose writings frequently appear in these pages, is perhaps best known for his book the TAZ--temporary autonomous zone--that describes when normally domesticated space is liberated, if only for a moment, for festive and subversive moments of happiness. 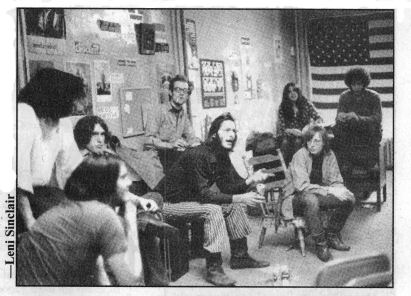 In 1969, Leni Sinclair took this photo during a meeting at the Fifth Estate office at 1107 West Warren. Included are members of the White Panthers and the FE, yet we’re not sure what the meeting was about. Seated on the chair to the right is Diana Oughton of Motor City SDS, and later, the Weather Underground. Oughton died (with her comrades Terry Robbins and Ted Gold) on March 6, 1970 in a Greenwich Village townhouse, from an explosion likely caused by a bomb she was making.

However, Bey also wrote a shorter essay which appeared in the Winter 1995 Fifth Estate entitled, “PAZ”--the permanent autonomous zone--where he discusses areas that function as a sustainable sector where we try, to the best of our ability, to invoke the spirit of the new society we envision (Perfectly? Not hardly! But we try). The many Fifth Estate offices have strived to meet that definition over the decades as much as possible.

The offices were physical points of resistance, both visible in the community and where real work of opposition to capital and the state took and takes place.

From the paper’s origin in a suburban basement in upscale Bloomfield Hills, Michigan, it soon set up shop in early 1966 in Detroit’s gritty Cass Corridor area, near Wayne State University, at 1107 W. Warren, near the Lodge Freeway. Then, after a brief stay two storefronts down, in what was to become the headquarters of the local antiwar committee, the FE offices moved in January 1967 to Plum Street, Detroit’s burgeoning hippie district, where the staff also ran a bookstore featuring radical, poetry, art, and music publications.

As the district began to disintegrate in the manner of the more famous Haight Street in San Francisco, the paper returned to the Cass Corridor in June 1967, just in time for the huge riots that swept the city the next month. We were safe from the integrated crowds looting, but a vindictive National Guardsman, realizing it was open season on radicals, as well as blacks, lobbed a tear gas grenade into the office, making it uninhabitable for weeks. At the end, the protectors of property killed 42 Detroit citizens.

The MC5 rock band often practiced in the basement while we carried on layout of the paper’s next issue. Many groups used our offices to plan actions against the war and racism including Motor City SDS, parts of which would become the Weather Underground, and Newsreel, a group of radical film makers. At that time, the paper published on a weekly or twice monthly schedule.

In January 1971, the paper relocated to 4403 Second Ave., still in the same campus area. This was a huge basement storefront Which allowed for numerous meetings of rebellious GIs, high school students, dissident unionists, and community people, whom we helped produce their own publications on an ancient mimeograph machine.

In Summer 1983, we moved up the street to 5928 Second Ave. to an even larger space that we shared with the Layabouts and Private Angst bands and a radical theatre group. The building was quickly dubbed The Un-Cooperative, and we all had a grand time until the first utility-generated steam heat bill of the winter arrived. It was more than almost a year’s rent; the landlord is still looking for us.

Because of the high price of renting, we published our editions for a while at the home of two staff members, until a generous friend of the paper let us use the offices of a dilapidated warehouse he owned. There was no central heat during the winter, so when we arrived to work on an issue, the temperature was often hovering around zero, so we kept our coats and gloves on, opening mail and the like, until our space heaters kicked in.

Fortunately, another friend of the paper offered us the basement quarters of his law office building in Summer 1987, during a period when we were intensely involved in opposing the construction of a poisonous incinerator in our area.

These offices on Second Avenue became an epicenter again, not only for publishing but also for socializing, political organizing, and occasionally sleeping a temporarily homeless collective member. We stayed there happily for the next 14 years, until the efforts of Detroit staff began to wane to the point that the paper was appearing only yearly.

Fortunately, enthusiasm for publishing remained, and our most recent move in 2002 was quite a divergence from previous ones. The Fifth Estate left the city it had been centered in for almost forty years and relocated to Pumpkin Hollow in rural mid-Tennessee where a collective coordinates publishing this quarterly magazine and runs The Barn, a book distribution service. The Detroit staff, which previously had primary responsibility for production continues to write, edit, contribute art and graphics, and handle financial and subscription operations, but without an office.