Zapping the Pyramid
Notes on the history of an anti-authoritarian symbol.

The design shows a pyramid surmounted by an eye being blasted by a bolt of lightning. Bannered beneath the collapsing pyramid is the motto, “NON SERVIAM.”

If English, Spanish, Italian, or French is your native tongue, then you can probably guess the Latin translation: “I will not serve.” The phrase is taken from Paradise Lost (1674) by the radical poet of the English Revolution, John Milton, wherein the archangel Lucifer refuses to obey God and is cast into the frozen lake of Hell for his rebelliousness.

I had been seeing the strong, simple, anti-authoritarian emblem of the zapped pyramid for about two decades--the first time, I think, was in 1986 or ’87, crudely rendered in white paint on the left shoulder of a battered black leather biker jacket worn by a woman who frequented a favorite post-punk bar in New Haven, Conn. Over the years, I have seen it a few different places, so when I saw that it was used as the (anti-)logo of Fifth Estate, I assumed that the editorial collective had adopted it after seeing it around the scene for years. 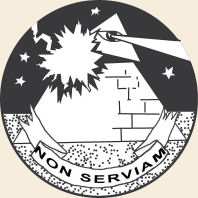 I was surprised to learn that the pyramid hadn’t been appropriated from someplace else--it had, in fact, originated with FE, and what I had been seeing all those years were actually take-offs of an image that had been done specifically for an FE cover by graphic artist (and percussionist-vocalist for the radical Detroit agit-pop band, the Layabouts) Stephen Goodfellow in the mid-1970s.

“Personally, I do not have the interest, inclination, temperament, or energy to argue as to who first zapped the pyramid,” Goodfellow writes regarding the origins of his design. “Until otherwise informed, I take credit for the existence of the ‘Zapped Pyramid.’”

He explained it this way: “The year 1976 was a very poignant year for me. I was rubbing elbows with the local [Detroit] writers and thinkers, some of these wrote for Fifth Estate. When Fifth Estate asked if I could do a logo, I jumped at it.”

Goodfellow’s choice of iconography is immediately recognizable to anyone who has ever seen the backside of a US $1 bill, where a radiant eye hovers above an unfinished pyramid of thirteen steps (dated “1776” in Roman numerals) on a barren landscape above a pennant reading “NOVUS ORDO SECLORUM” (“New Order of the Ages”). Etched in the sky above the pyramid is ANNUIT CEPTIS (“favorable to our undertakings,” in all probability meaning that God looks favorably down upon the American enterprise).

“Ever since I saw my first dollar bill,” Goodfellow writes, “I had been intrigued why on Earth someone would place such a strange symbol on currency: a pyramid with an eye embedded, suspended at the top of a pyramid. How strange!”

The pyramid symbol is the reverse side of what is officially known as the “Great Seal of the United States” (the front side of the Seal features the US coat of arms, featuring an eagle with shield, arrows, and olive branch, which can also be found on the back of the dollar). Benjamin Franklin, Thomas Jefferson, and John Adams had drafted sketches for a national logo since 1776, but it was the Continental Congress secretary, Charles Thomson, who drew up the final version based on a previous committee’s recommendations that was accepted by the Congress in 1782. It first appeared on the dollar by order of President Franklin Roosevelt in 1935.

The Great Seal is a favorite case study for those conspiracy theorists who insist that the USA was founded (and continues to be run) by a shadowy secret society of power brokers and string-pullers, primarily the Freemasons. There is some verifiable truth to their claim that the American Revolution was engineered by Masonic forces.

In the North Atlantic world of the late eighteenth century, association with Freemasonry was a fashionable trend among the merchant and plantation elites of the thirteen colonies of North America because of the Masons’ exclusivity, their belief in their role as protectors of middle-class values, and their efforts to popularize the instrumental reason of the Enlightenment as a more modern management style. By some counts, about a dozen Masons signed the Declaration of Independence, but like other private right-wing fraternities of well-connected white men--like today’s Order of the Skull and Bones, the Bilderberg Group, and the Bohemian Grove Club--this was less a case of conspiracy than a romanticized and ritualized expression of the colonial elites’ unified class interests.

Still, the Masonic connection has enough of a whiff of esoterica about it to convince many anti-Masonic writers that the American Revolution was a Freemason-coup d’etat. Among these folk, the imagery of the Great Seal is a kind of visual secret handshake among the initiated that acknowledges the dark truth about who really runs this country.

Curious, tolerant readers are welcome to wade out into the wide Sargasso sea of the internet to find out for themselves how to crack the code of the Great Seal. But in those benighted days before the internet, sci-fi writers Robert Shea and Robert Anton Wilson mapped all this out (and much, much more) in The Illuminatus! Trilogy (1975), a complex, sprawling fairy tale about meaning, knowledge, and the hidden hands of power (the first volume of this work is titled The Eye in the Pyramid).

Like Umberto Eco did less deliriously with Foucault’s Pendulum (1988), Shea and Wilson spoof the obsessive wheels-within-wheels political paranoia of conspiratologists by cutting-and-pasting together a fractured narrative of hypotheses, coincidences, historical events, and completely fictionalized bibliographic citations surrounding the occult activities of the Illuminati of Bavaria. In the end, the books’ wacky narratives and counter-narratives comprise a sustained interrogation of the arbitrariness and the illegitimacy of the methods and institutions of politics, governance, and authority, a feat that arguably qualifies it as one of the most important works of anarchist fiction in the last forty-five years.

Wilson, a self-described “guerrilla ontologist,” libertarian, and neuropolitical futurologist, has compared the effect of writing and reading the trilogy to gnawing on peyote buttons and watching “a Three Stooges comedy performed by the inmates of the asylum of the Pentagon under the direction of the Marquis de Sade.” Goodfellow says that he remembers reading The Illuminatus! Trilogy “the year before creating the logo” for Fifth Estate. The book, which was an FE bookstore bestseller, “had a profound impact upon the way in which I viewed the universe, and set me on a course of discovery that continues to this day.”

The zapped pyramid remains as relevant a badge of anti-authoritarian disobedience as it did when it first appeared in FE in the mid-1970s. Even if you were not aware of its intimate connection to the ideas of Robert Anton Wilson, you could recognize its significance simply as a demolition of the Great Seal as it appears on the dollar, it being the representative currency (for now, at least) of globalization. Beyond the anti-capitalist connotations, though, the zapped pyramid can be pushed open to cover a broader, more general rejection of US political and cultural hegemony. Goodfellow’s image can be interpreted as a defiant refusal to serve this settler nation of racial segregation, crackpot Puritanism, violent Manifest Destiny fantasies, and shameless plutocratic rule. In short, it would not be difficult to imagine the zapped pyramid spray-painted on a crumbling wall in Fallujah or Caracas or Mumbai or Karachi.

But we might also mention one of the more chillingly oppressive resurrections of the Great Seal pyramid that has nothing (I think?) to do with Masonic hanky-panky, namely, as the insignia of the Information Awareness Office at the US Defense Advanced Research Projects Agency.

The pyramid used by the IAO is magically suspended in outer space and orbiting the Earth; it also is thirteen-stepped and its capstone is the radiant all-seeing eye-in-the-triangle. This creepy version of the design, however, shows the eye bathing North America, Eurasia and Africa in the lighthouse-like beacon of its panoptic gaze. Written in Latin under the pyramid and the globe is “SCIENTIA EST POTENTIA,” Francis Bacon’s Enlightenment watchword that translates as “Knowledge is Power.”

In the words of the IAO, “the logo was designed to convey the mission of that office, i.e., to imagine, develop, apply, integrate, demonstrate and transition information technologies, components, and prototype, closed-loop information systems that will counter asymetric threats by achieving total information awareness useful for preemption, national security warning, and national security decision making.” Although the plans to use this logo for IAO have since been scrapped because of the explicit nature of its totalitarian menace, rest assured the office’s work continues at a zealous pace (check it out for yourself--send the cell phone text message, “Bmb OK. Allah gr8” from a crowded urban area and see what happens).

The early twentieth-century Irish writer James Joyce remixed the “non serviam” of Milton’s Lucifer in his 1914 novel, Portrait of an Artist as a Young Man: “I will not serve that in which I no longer believe, whether it call itself my home, my fatherland or my church: and I will try to express myself in some mode of life or art as freely as I can and as wholly as I can, using for my defense the only arms I allow myself to use--silence, exile, and cunning.”

I’d like to think that this credo is leavened into the FE’s zapped pyramid, and that its image will continue to serve as a kind of talisman for anyone who has decided to refuse and rebel.