Ron Cobb
The Fastest Pen in the West

Editor’s note: Ron Cobb is one of the most brilliant contributors to the Underground Press Syndicate (UPS) and the Fifth Estate. His cartoons originate from the Los Angeles Free Press as does the following article.

The big, massive shouldered artist with the square-cut beard arrived in the lobby of the hall where Realist editor Paul Krassner was holding forth prior to another Los Angeles one-man show. 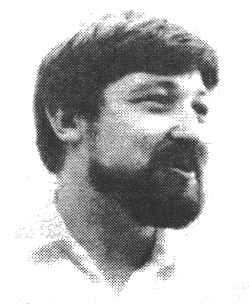 “Gee, you look just like your cartoons,” said Krassner to the solid, blocky-looking Ron Cobb. “The Toughest Pen in the West,” is the way Cavalier headed the first national magazine spread of Cobb cartoons. The good news is that the new Cavalier management may run a full-page color Cobb cartoon every month.

This event looks as if it might get Ron out of the monster magazine cover bag for good. Yeah, monster covers! I mean, Ron Cobb is the Underground Press. That means we don’t have to take him seriously, like Jules Feiffer, who is after all from the literary Greenwich Village scene.

What of the Cobb, himself? There are a few surprises here. Ron isn’t the stormy ego type of artist. He’s always cheerful and calm, the inspired happy craftsman à la medieval mystical seer Jacob Boehme.

“Oh, I don’t get very mad when I draw the cartoons,” says Cobb in response to the obvious question about his gut-solid pen and ink attacks on repression of the spirit.

“By and large I like Man,” says the 29-year-old cartoonist-painter-photographer. “But I like the beast in man. The entire human phenomenon gives me endless amusement. I like to do my cartoons on the whole thing, showing one side against another rather than taking sides.”

Cobb is from Burbank, where the family still lives. He admits to being a rotten high school student. He was the kind of failure who is in love with classical music, science fiction and esoteric bull sessions.

Cobb’s high school buddies were some of the more orthodoxly brilliant students around and they got together to start the Chesley Donovan Science Fantasy Foundation, named after nobody in particular. Still in existence, the club was once very active in S.F. fandom and Ron’s sterling artwork in their magazine brought him to the attention of two big resident talents who would often pitch in for him as his career started...author Ray Bradbury and agent Forrest J. Ackerman.

Ron didn’t have to leave Burbank to pick up his first gig after high school. The Walt Disney studio took one look at his portfolio and hired him as an animation artist.

“For two years I drew Sleeping Beauty running through the woods,” says Ron. He met some groovy people on the art staff and was paid at the usual princely Disney level of $80 a week.

Laid off after the picture was over, Ron began a discouraging period of strange factory work making plastic movie props and assembling andirons. He also was a mailman. “My boss told me I’d be making a lot of money at the post office if I didn’t quit,” says Ron. “I guess he was right.”

Then for a couple of years he got into another odd scene. “These fly-by-night producers kept getting me to be the art director on spec for TV pilot films that never got sold,” he recalls.

The wildest of these projects was for a live-action movie of the “Lord of the Rings” trilogy. This was way before the fantasy books got popular and Ron was grateful just to be turned on to the Tolkien masterpiece. He worked up a book full of orc and elf paintings that was sent off to Prof. Tolkien in Oxford U.

The word back from England was that Tolkien hated the screenplay but flipped out for the Cobb illustrations. “I want that man to design the movie if it is ever made,” he’s supposed to have said.

For laughs, Ron was sitting in on Cal Tech buddies’ classes during this period. He has a great affinity for scientific speculations. He’s also a thinker and a half, awesomely eloquent once he decides to get past his usual quiet, modest approach.

This is part of his answer to a general question about the hippies: “The hippies have this inkling of the truth that Man’s only stability is inside himself.

They’re leading the way back to this concept after 2,000 years of a very abstract view of history. But I find myself liking the hippie idea more than individual hippies. The individuals often don’t make much sense, they don’t seem to be succeeding in their desire to be fully what they are. I guess they’re moving towards a life that is also art. This would mean no more art. You only need art in an artless society.”

Believe it or not, Cobb doesn’t think he draws cartoons well. “It’s not too easy, for me,” he said. “I’m constantly working at the bare edge of my abilities. I don’t have the ease and facility of more experienced cartoonists and I wish I did.”

But I don’t think Ron is going to hear any complaints about his work from you or me. This cat is the George Grosz of Southern California.