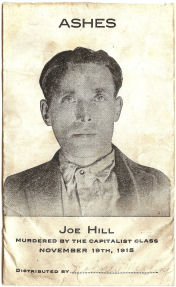 Lane: Rumor has it you once drank a glass of beer containing the ashes of the famous Wobbly songwriter, Joe Hill.

Bragg: It’s true, actually. Joe Hill was executed by the state of Utah in 1915 after a frame-up trial. When he died, he was cremated, and they had asked him where he wanted to be buried. He answered, “Anywhere but in Utah,” where he had been executed by a firing squad. So, what the Wobblies decided to do was to send his ashes to every union branch in the United States. They put them in little packets and mailed them out.

In Chicago, the FBI impounded Joe’s ashes in 1918 since he was still dangerous even in ash form. They stayed in some FBI storeroom in Washington, D.C. until they were discovered in the late ‘80s--a small packet of a couple of ounces of Joe’s ashes. The government sent them back to the IWW headquarters in Chicago. The union had a debate in their paper over what to do with the ashes.

Abbie Hoffman, of all people, suggested that they should be eaten by people like myself and Michelle Shocked. He said when we die, people should eat our ashes, and so on. While I was doing a gig in Chicago, these IWW members, Jeff Ditz and Mark Kaufmann, turn up with this little white packet of stuff and say, “This is Joe Hill’s ashes and we want you to eat them.”

It was a little bit distasteful, but it was only a tiny bit, not like a handful, just a tiny fragment, and I washed it down with some union beer.