“What are kingdoms but great robberies? Indeed, that was an apt and true reply which was given to Alexander the Great by a pirate who had been seized. For when that king had asked the man what he meant by keeping hostile possession of the sea, he answered with bold pride, ‘What thou meanest by seizing the whole earth; but because I do it with a petty ship, I am called a robber, whilst thou who dost it with a great fleet art styled an emperor.’”

It was one of those moments of grim synchronicity. In late July, the civilian death toll being tallied by the Iraq Body Count database hit 25,000 at about the same time that the Vietnam war criminal General William Westmoreland died at the ripe old age of 91.

The historical resonance here is that--in so many horrible ways--Westmoreland’s nightmarish management of the war in Southeast Asia has become a template for the brutal waste and carnage being orchestrated by the Pentagon in Iraq today. 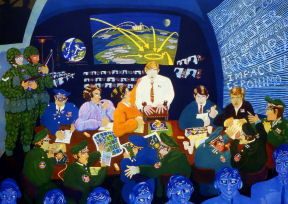 The atrocities engineered during Westmoreland’s tenure in Vietnam were related to his futile counter-insurgency efforts.

Frustrated by the jungles of Vietnam, Westmoreland ordered a steep escalation in the use of the devastating Agent Orange dioxin herbicide, perfected the systematic terrorizing of the Vietnamese people in the name of “pacification,” and was instrumental in collaborating with the CIA in the savage campaign of corruption, torture, and targeted killings by the “Operation: Phoenix” death squads.

These patterns have been repeated throughout Iraq in the form of the radioactive dust of depleted uranium munitions, the senseless obliteration of cities like Fallujah, and the ex-Ba’athist special police commandos of the masked “Wolf Brigade,” run by the US military out of the Iraq Ministry of the Interior.

When asked by a reporter in 1966 if he was at all troubled by the large number of Vietnamese civilians killed by US forces and their South Vietnamese stooges, Westmoreland shrugged and said, “It is a problem, but it does deprive the enemy of the population, doesn’t it?” (This from the same guy who asserted in 1974 that, “the Oriental doesn’t put the same high price on life as does the Westerner.”)

When studying the statistics compiled by the Iraq Body Count database--facts like the 45,000 grievous injuries to noncombatants in Iraq, or that US air strikes caused 64 percent of all civilian deaths involving explosives, or that 20 percent of all those killed were women and children--you begin to see how Westmoreland’s cold-blooded comment helps to explain the Pentagon’s removal of US troops to places as distant as possible from suicide attacks, thus assuring that Sunni terrorists can kill as many Iraqis as they can with impunity.

In the spring of 1968, Westmoreland reassured the US public that “the enemy has been defeated at every turn” in Vietnam; that war continued for the next seven years. Similarly, on June 20, 2005, US Vice President Dick Cheney proclaimed that the insurgency in Occupied Iraq was “in the last throes”; two and a half weeks later, Major General William G. Webster, Jr. echoed his Executive Branch bosses when he told reporters in a video-teleconference from Baghdad’s Green Zone that US troops and collaborationist Iraqi Army, police, and security forces had “mostly eliminated the ability of insurgents to conduct sustained, high-intensity attacks” and predicted that “in the next couple of months we will not see sustained, long bloody months in Baghdad.”

More than 300 Iraqis and 100 Occupation soldiers have died since Cheney’s and Webster’s meaningless remarks, and there have been almost 45 car and suicide bomb attacks in Iraq, not to mention the awful blowback bombings in London in July.

Westmoreland was notorious for his stubborn inability to comprehend the fact that his enemies regarded their fight as an anti-colonial nationalist struggle. His refusal to recognize the ideas behind the guerrilla war doomed his efforts to failure. He pompously disregarded a century’s worth of French military analysis of the Vietnamese resistance movement, believing instead that reading a few pages in Mao Zedong’s Little Red Book every night before bed would be enough to figure out what was going on in the Indochinese peninsula.

Westmoreland’s superciliousness and sophistry is today matched by that of British Prime Minister Tony Blair who insisted that the July bombings had no connection to Britain’s occupation of Iraq or its criminal alliance with the USA, but was rather an example of how some societies are less civilized than his own. Australian Prime Minister John Howard also refuses to believe that there is any direct correlation between neo-imperialist aspirations and the attacks against the Empire.

If there was any doubt that the bombings in London were linked to the Anglo-American occupation of Iraq, be aware that the Abu Hafs al-Misri Brigades took responsibility for the attempted July 21 bombings in London with a warning that “we will not relent and sit idle before the infidel soldiers leave the land of two rivers.”

The war in Iraq is a staggering catastrophe. The Global War on Terrorism (TM) is already lost, having been rebranded recently by the Pentagon’s Department of Silly Phrases as the “struggle against violent extremism.” This is reminiscent of “ Bush’s slip of a few years ago calling his wars a “crusade;” it’s now a “struggle”--or, jihad in Arabic, or Kampf, as in Mein, in German. It seems, however, as we go to press, there’s some confusion boiling within the Inner Circle. Bush just used the “War on Terror” five times in a speech, confounding Secretary of War Rumsfeld’s continual use of the new phrase. They can’t even get their lies straight. So, do we believe Chimpy McFlightsuit or Dr. Strangelove on this one?

Westmoreland presumably went to his grave clinging to his 1985 statement of having “no apologies, no regrets” for what he did in Southeast Asia. In fact, even more shocking, Westmoreland insisted in his golden years that the US did not lose the war in Vietnam. One can imagine poisonous toads like Cheney, Bush, Rumsfeld, and Blair making equally fantastic statements about the Iraq quagmire in later life, remarks borne from that nasty blend of stupidity, shameless deception, bad faith, and hubris that have intoxicated these same sociopaths for years.

One must wonder how people so monstrously arrogant and so aggressively ignorant can continue to maintain their dangerous delusions before someone figures out a way to stop them and laugh them off of the world stage.

Like Westmoreland in Vietnam, the architects and managers of the Iraqi occupation are terrorists whose hands are as bloody as those they so self-righteously hunt.