World War I: The Chicago Trial

“No war but the class war” was the expressed motto of many radicals who refused to enlist or otherwise contribute to any national war effort. At their tenth convention in 1914, the IWW passed a resolution stating, “We as members of the industrial army will refuse to fight for any purpose except the realization of industrial freedom.” 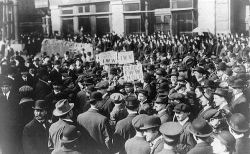 However, after the United States declared war on Germany in 1917, the IWW took no official position on the draft although debate was heated on the topic between members of the union’s Executive Board. In the end, the leadership decided against explicitly encouraging the membership to violate the law. The way they were subsequently treated, by federal and state officials, however, they may as well have.

During the 1917 to 1920 Red Scare, Attorney General A. Mitchell Palmer, along with his special assistant, J. Edgar Hoover, declared war on the IWW, conscientious objectors, anarchists, and other radicals. Thousands were arrested for violation of the Espionage Act.

Wobblies and other radicals, including Eugene Debs, A. Philip Randolph, and Russian-born anarchists Emma Goldman and Alexander Berkman, as well as editors of publications like The Masses and the Yiddish language Der Shturm, which authorities said criticized the United States and undermined the war effort, were targeted by army troops who raided and ransacked offices, meeting halls, and homes, confiscating records, membership lists, account books, literature, correspondence, minutes, and other paraphernalia.

The 1917 Espionage Act made it illegal to encourage resistance to the draft. The Act was partially a response to the IWW’s call for solidarity with workers everywhere, and the fear that public criticism of the war would hinder military recruitment. Penalties for violation included $10,000 fines and 20 years in prison. A year later, Congress passed the 1918 Sedition Act, which prohibited public criticism of the government. In addition, twenty- one states passed criminal syndicalism laws in an effort to get rid of the IWW.

Three separate groups of IWW leaders in Chicago, Sacramento, and Wichita were put on trial in 1918 for violating the statutes. Among the 100 Chicago Wobblies arrested were Ralph Chaplin and Big Bill Haywood (Haywood jumped bail along with eight others and fled to Russia at the urging of the Communist Party; he died in Moscow in 1928). The trial lasted five months and although the government’s case consisted primarily of attacking IWW theories and principles, all defendants were convicted. The prosecution tried to prove that the organization’s official policy advocated violence. However, they were unable to provide any evidence of sabotage; moreover, no such evidence in any IWW trial was ever produced.

In the Cook County (Chicago) jail, the Wobblies passed the time writing poetry and songs, publishing a hand-written jail newspaper, The Can Opener, telling stories, giving lectures, and holding meetings. The 34 Kansas prisoners were not so fortunate, suffering horrible prison conditions and severe physical and mental abuse.

Both the Espionage Act and the Sedition Act were repealed in 1921 and President Harding, under pressure from religious and labor groups, as well as the families of the prisoners, began granting clemency for those who requested it. Fifty-two IWWs, however, wrote an open letter to Harding in which they refused to ask for clemency stating they did not violate the law and were denied justice. Those that did request clemency, usually due to family pressures, were scorned by the rest. By 1923, most prisoners were released through presidential pardon.

Despite the great amount of publicity and support the IWW received as a result of the trials and imprisonments, the organization was irrevocably damaged. Although new leadership was in place, the dynamic force of the union was lost; it never regained its hold on the American labor movement.