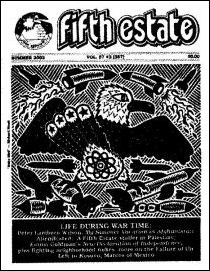 FE cover, June 2002. Richard’s art was often mysteriously ambiguous. We ran this as emblematic of the ruthless US war machine. However, a Pentagon art buyer thought it accurately portrayed the military mission, and a print hangs in the headquarters of the masters of war.

Richard Mock, political cartoonist, painter, sculptor, educator, anarchist, died in Brooklyn July 28 from complications due to diabetes at 61. Richard had an epic vision that he gave to us piece by piece in his creative linocuts. He freely contributed use of his political cartoons to anarchist and worker publications such as the Fifth Estate, Anarchy and UNITE. Many, such as the one on this page, graced our front covers.

After 1996, and surviving three editors at The New York Times over two decades, Mock’s linocuts were picked up mainly by out of country presses in 55 nations, his art appeared regularly on the cover of the UN international magazine.

He taught grade-schoolers in New York City how to find the local and global issues they felt urgent about, and by understanding irony turn them into linocuts. Mock fought school principals who argued you can’t present these issues at this age. “Sure you can,” he said. “They are inheriting this mess we are ignoring.” 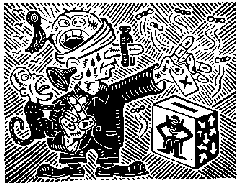 Richard lived minimally in his Red Hook, Brooklyn studio with his birds and his lino press always in motion, dominating the room, and then jumping in his old Dodge pick up, heading out to all ports to teach or share his art works. “Detroit is my Club Med. I like the warmth of the working class,” he told us once. “When I drive in here in my old pick up truck, I feel I’ve hit paradise.”

Mock was the Ways & Means committee on survival: “One of the things that you have to do very early in life if you are going to be an activist, and hopefully everybody realizes that their survival depends on it, is to find what are the malefic forces that are encroaching upon your life and are threatening the planet. It’s this very strange abstract amorphous entity called the corporation....We are converting a planet from substance to an abstraction. This currency system, globally, is an abstraction. We are destroying a whole planet, the lives for our future generations for an abstraction. That’s a disease. And we have to address that.”

Richard Mock was generous with his ideas. He wanted us all to take the ball and run with it.

Note: There is a Wikipedia entry for Richard Mock at http://en.wikipedia.org/wiki/Richard_Mock