The Radical Roots of Gary Snyder

Looking at Gary Snyder’s writing is a geological experience. Picking up a copy of The Gary Snyder Reader or checking out his shelf at a library will reveal layers of poems, journals, and essays dating from the late fifties to the turn of the millennium--all written by a would-be Wobbly turned Zen poster child of the San Francisco Renaissance. Considered foundational texts for everything from the hippies and New Left to bioregionalism and Deep Ecology, Snyder’s work reads like a countercultural cross section of the last fifty years. 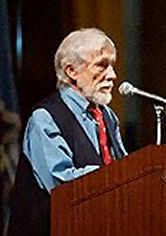 All of Snyder’s poetry and prose contain tasty morsels for the interested anti-authoritarian, but lately, I’ve been keeping a particular essay at my bedside. “Buddhism and the Coming Revolution,” alternately entitled “Buddhist Anarchism” and “Buddhism and the Possibilities of a Planetary Culture,” was originally published in 1961 and later included in a prose collection, Earth House Hold. [And it most recently appeared in Fifth Estate #359, Winter 2002–2003, the issue addressing spirituality and still available from the Barn for $5]. Its eight paragraphs are a little naive and essentialist--but also daring and vivacious--and in them, Snyder weaves together Eastern religion and Western revolution in a pattern that continues to fascinate today.

The semi-manifesto begins by indicting both capitalist and socialist states. “No one today can afford to be innocent, or indulge himself in ignorance of the nature of contemporary governments, politics and social orders,” Snyder says. “The national polities of the modern world maintain their existence by deliberately fostered craving and fear: monstrous protection rackets...The conditions of the Cold War have turned modern societies--Communist included--into vicious distorters of man’s true potential... The soil, the forests and all animal life are being consumed by these cancerous collectives.”

Some would trace the anti-authoritarian flavor of this passage to his roots in the radical labor movement, and there’s no doubt it’s in his blood. Snyder was raised in an anarcho-syndicalist household outside Portland, Oregon; his grandfather soapboxed with the Industrial Workers of the World, and both of his parents were labor movement radicals who grew disenchanted with the Soviet Union and Stalin’s atrocities. Snyder bounced around the Pacific Rim as a logger, forest service lookout, and sailor, and was himself a member of the IWW. But while the union makes many cameos in Snyder’s earlier poems, it serves mostly as a nostalgic icon of movements past.

At the time, it would’ve been easy to think the Wobblies were done for. When Snyder was blooming as a poet, McCarthyism was bludgeoning the famed union to death along with every other group in the American left. The subsequent stagnation of American radicalism, clearly a concern in Snyder’s early poetry, contributed to a general understanding that the “old left” had disintegrated--libertarian movements by direct attack, and the communist bloc by authoritarian suicide--and that folks had better look around for new revolutionary possibilities.

Snyder’s search led him to “Buddhism and the Coming Revolution,” but it began earlier in volumes like Myths & Texts and The Back Country, and continued through collections like Regarding Wave and Mountains and Rivers Without End. In all these books, Snyder tries to revive resistance to oppression and ecocide by articulating a holistic revolutionary culture. His work puts Buddhism in a blender with leftist politics and breaks with the authoritarian baggage of capitalism and socialism. Poetic sequences like “Logging” and “Burning,” or manifesto poems like “Revolution in the Revolution in the Revolution,” explode the leftist tradition by grafting a mix of Buddhist and indigenous worldviews onto Snyder’s own radical roots.

“Buddhism and the Coming Revolution” deserves particular attention, though, because it encapsulates so much of this political exploration. The essay sets the stage for the next forty years of Snyder’s work and predicts 1960s counterculture a year before the Port Huron Statement would give Students for a Democratic Society its first cautious beginnings. Snyder calls for “radical social change through a variety of hopefully non-violent means,” but informed by “practical systems of meditation” to free people “from psychological hangups and cultural conditionings.” “The mercy of the West has been social revolution,” we read, while “the mercy of the East has been individual insight into the basic self / void. We need both.”

True, when he wrote lines like “Buddhism holds that the universe and all creatures in it are intrinsically in a state of complete wisdom,” Snyder had never lived in a monastic institution. Readers with a grain of salt might object that Snyder’s interest in Buddhism--along with that of his west coast contemporaries--was Orientalist or fetishistic appropriation. But moreso than some of his presumptuous peers, Snyder nurtured a budding interest in the East with decades of committed study, practice, and personal involvement.

After “Buddhism and the Coming Revolution” was published, Snyder moved to Japan for the better part of a decade. He lived in Zen monasteries and Buddhist communes and returned to North America with a broadened understanding of the “vast interrelated network [of] objects and creatures” described in Mahayana Buddhist traditions. Soon afterward, Snyder forged ties with indigenous nations and Earth First!ers while developing bioregionalism and Deep Ecology--two currents that helped to define radical environmentalism from ecofeminism to the Earth Liberation Front. His effort to make Buddhism relevant to an egalitarian and ecologically grounded way of living--a revolutionary practice that radiates from the individual outward--draws on deeper political commitments than tuning in, turning on, and copping out.

But even before moving abroad, Snyder saw the exotic East with a critical eye. “Buddhism and the Coming Revolution” opens with the disclaimer that Buddhist philosophers “failed to analyze out the degree to which ignorance and suffering are caused or encouraged by social factors,” and that “institutional Buddhism has been conspicuously ready to accept or ignore the inequalities and tyrannies of whatever political system it found itself under.” The idea that religious specialists hold hands with the powerful is uprooted by Snyder’s understanding of Buddhism, where “the Bodhisattva lives by the sufferer’s standard, and he must be effective in aiding those who suffer.”

In contrast with authoritarian religion, Snyder tells us that Buddhist anarchism has “nation-shaking implications.” Its practice “means, for me, supporting any cultural and economic revolution that moves clearly toward a free, international, classless world. It means using such means as civil disobedience, outspoken criticism, protest, pacifism, voluntary poverty and even gentle violence...It means affirming the widest possible spectrum of non-harmful individual behaviors.”

This list sounds a bit like New Left counterculture, a bit like the Zapatista call to build “a world in which many worlds fit,” and a bit like the diversity of tactics and traditions that characterize today’s anarchism. In each, the idea is to create a diverse milieu that can defend itself from a brutal authoritarian system--a kind of fighting heterotopia. But for Snyder, the idea goes back to his roots: that is, “‘forming the new society within the shell of the old’--the I.W.W. slogan of fifty years ago.”

Among the short list of poets who explore the radical possibilities of our world, there’s an even shorter list of poets whose work strikes an anti-authoritarian chord. The poems of Amiri Baraka may be highly political, for instance, but his work can still be separated into distinct ideological periods in which he champions a particular ism; these phases are mutually exclusive, and each step of the way, the poet seems willing to renounce his earlier work for the newer, “correct” position.

Snyder’s poetry, by contrast, is a geological experience. Each new influence is superimposed on its predecessors, connecting and interacting with what came before. That’s how the anarchist counterculture imagined in “Buddhism and the Coming Revolution” resurfaces in Snyder’s later writing. Poems like “Painting the North San Juan School” or “Finding the Space in the Heart” reinterpret Snyder’s holistic revolutionary culture in new contexts, decades later and with new influences.

Today, anti-authoritarians again find themselves in troubling times. Beset on all sides by global capitalism, fundamentalist regimes, and lumbering socialist states, it’s hard to see how people should build a free, sustainable world. Snyder’s writing retains a lot of appeal because, in different times, it grappled with similar problems. Even today, Gary Snyder’s work remains a deep well from which to drink and rich compost in which to plant the stubborn seeds of change.