I found out that Brad Will had been shot to death from a message that went out over New York City email lists on October 27. It simply said, “Fuck, ya’ll, fuck,” followed by a link to an Indymedia story describing the events of that day. Soon, it was confirmed that Will, an IMC journalist and ever-present figure in the New York anarchist scene, had been gunned down in Oaxaca in southern Mexico where he had been chronicling the revolutionary upsurge building there since April 2006. 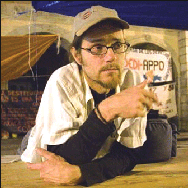 Will’s death, coming alongside the death squad murders of Emilio Alonso Fabian and Esteban Lopez Zuritaon the same day in Oaxaca, made a brief blip on the US national news before disappearing into the usual morass of crime, sports and weather. His death has, however, remained a focal point for radicals. Afterwards, it became obvious that Will was one of those rare figures who had managed to befriend everyone in his generation’s political scene; in the words of one compatriot, “it was impossible not to like this guy.“The anarchist community in NYC organized vigils and rallies in the days after his murder, which included a shutdown of the Mexican consulate and a re-occupation of Charas, a squatted community center that had been sold to capitalist developers but remains empty.

Until his death, Will seemed to have lived a charmed life, and for years was at the forefront of every major anti-authoritarian struggle. Later I realized Will had actually been the main character in several famous activist stories I had heard--although the knowledge of none of them came from his mouth. His skill at story-telling obscured his humility about himself; and one friend described Will as being quietly embarrassed by his own notoriety.

Will became politicized while crashing poetry classes at Naropa, the Buddhist college in Colorado, in the early 1990s. There he was a participant in one of those famous/anonymous stories I had heard: the mock gay wedding in Colorado (long before even the discussion of such a real possibility was on the table) designed as a protest against the conservative christian Promise Keepers. The marriage was presided over by Peter Lamborn Wilson. Will then went on to hang out at Dream-time Village in Wisconsin (at the time one of the most important centers of radical intellectual, artistic and sexual experimentation) before moving to New York City to become part of the squat scene. In another famous story I did not know was about him, in 1997 Will risked his life by jumping on the roof of the Fifth Street squat as the wrecking balls were knocking down the walls. His action ended up winning a large financial settlement for the squatters and changing the laws regarding squat evictions.

Will then traveled west and participated in Earth First! direct actions, before (like many 1990s anarchists) becoming deeply involved in the anti-globalization movement. He participated in the series of demonstrations around the world against the new round of global trade pacts, such as those proposed by the World Trade Organization. Back in NYC he was involved in local projects as well, such as the NYC Indymedia and More Gardens!, a radical environmentalist group, committed to saving urban community gardens from privatization through a combination of direct action and litigation. He then turned his attention to the uprisings in South America, travelling to Argentina and Ecuador; in Brazil, he was nearly killed while documenting the eviction of a squatter encampment; and in Mexico he covered the Zapatista’s Other Campaign, which encouraged the poorest in Mexico to organize “from below and to the left.” Despite advice to stay away from the tense situation in Oaxaca, Will returned to Mexico to document the struggles of the poor and oppressed in their bid to oust the corrupt local government; in doing so, they utilized decentralized and democratic forms which mirrored those championed by anarchists in the US. (Although rarely mentioned in media accounts, Will was a non-dogmatic eco-anarchist who was close to primitivism.)

Will’s death has created controversy as well. First, for the Mexican government, who were pressured into arresting his probable killers who were local government officials filmed by Will himself moments before his murder. Under international pressure they were arrested, but released soon after and now the government is, incredibly, attempting to blame the resistance in Oaxaca, the APPO, for his death!

However, some radicals in the US and Canada have portrayed Will as a reckless young man who thought that his white skin would protect him from harm in a tense situation. But Will was 36 years old, well traveled, and already had a gun put to his head on a previous journalistic assignment. He might have been brave, even fearless, but he was not foolhardy. He knew the risks he was running and consciously took his chance: the video he was filming as he was murdered seems to show that he was hit by random shots into a crowd. Will had played the game, and fate dealt him a rough hand.

Many people have ruminated on the meaning of Will’s death, especially for activists in North America. He has been portrayed as a martyr figure by some. Indeed, it is hard to deny that he did fulfill that role in many ways. How many children of midwestern middle-class parents spent their lives working tirelessly for social justice, only to end up murdered, unarmed, in an attempt to bring attention to the struggles of the poor and oppressed?

But Will should not be remembered as another death-cult martyr. He would have hated that, for he clearly loved life too much. Will should be remembered, not by remembering Will at all, but by picking up his fallen camera and pen, and being like Brad: by engaging in acts which aid and document the struggles of people who are attempting to free themselves from oppression.