The Strategy of Concealment
Argot and slang of the ‘dangerous classes’

The Language of Those in the Know

Overhearers, Informatives, and other Mugs

In Defense of Concealment 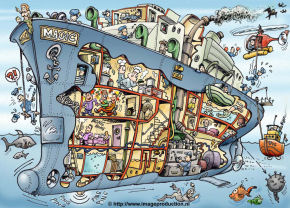 Often, when I turn to the anarchist press these days, it’s certain I’ll find someone commenting on the lack of “clarity” in the discourse of the movement. In a recent editorial in Anarchy, for example, Lawrence Jarach writes “there is an overflow of ambiguous (at best) terminology in much contemporary anarchist discourse.”

This ambiguity and use of “buzzwords” is a problem, he feels, because it “pulls the reader back into the realm of jargon; those in the in-crowd already understand the peculiar usage, further enforcing the sectarian nature of the project.”

While Jarach stresses he is not an advocate of a “static or conservative use of language,” and that he favours “warping and tweaking buzzwords and jargon using satire and ridicule,” in the final analysis, jargon and cant per se are to be avoided because they are “murky” and “unsatisfying” for “average” readers. It seems, then, that when it comes to language, some anarchists may have something in common with the masters of this society, who also see slang and cant as a threat to the discursive regime.

Here we run up against the old problem of whether the master’s tools can be used to dismantle the master’s house. For while the Enlightenment values of rational debate, precisely defined terms, and other forms of communicative transparency can be used to carry out our somewhat alienated, “public” conversations, conversations aimed at facilitating the development of our theory, at nuancing debates, sharing news, coordinating tasks and gatherings, etc., we should be wary of celebrating such tools as ends in themselves. Why?

Because in not only using but defending the tools of the master, we may be overlooking weapons provided to us by one of the most generative and subversive languages in the anarchist tradition--the language of the dangerous classes. And, given the rise of surveillance technologies, the proliferation of snitches, finks, and insidious “community policing,” closer attention to the workings and implications of this robust “language of conflict,” as Alice Becker-Ho (a colleague and companion of Guy Debord) has called it, a language which always speaks “truth with falsehood,” may be a tactical necessity.

The Language of Those in the Know

Over the last two decades, Becker-Ho has generated an extraordinary body of writing, including several important studies of jargon and argot, along with a number of works of poetry and translations.

Argot is commonly defined as “slang used by various groups, including but not limited to thieves and other criminals, to prevent outsiders from understanding their conversations,” and further, “a specialized vocabulary and terminology used between people with special skill in a field.”

Chastised by stodgy literary types as a kind of linguistic degradation, the “decline” of a more sophisticated national language (or, less sensationally, as merely “idiomatic”), argot was famously defined by Victor Hugo in Les Miserables as “nothing more nor less... than the ugly, restless, sly, treacherous, venomous, cruel, crooked, vile, deep, deadly language of misery... we can hardly recognize it. Is it really the French tongue? The great human tongue? We distinguish questions and answers, we perceive, without understanding, a hideous murmur, sounding almost like human tones, but nearer a howling than speech. This is argot.”

The definitions agree: argot poses a threat, both as a language, but more importantly, as a form of contract, a social bond designating “insiders” and “outsiders.” This second, overlooked aspect of argot animates Becker-Ho’s work; here, argot is treated not simply as “a language,” but rather as “an independent and unified practice” that unites “a brotherhood of rogues.”

As Becker-Ho writes in “The Language of Those in the Know”: “[argot] is not simply discreet and defensive. It theorizes what is about to be done: it already is a project. It never talks for the sake of talking. For those who can understand this language, every aspect of it carries the permanent confirmation of their vision of the world. Slang is not a mere specialized jargon, nor is it a language grafted on to conventional speech. It is precisely the manifestation...of an outlook exclusive to the so-called dangerous classes.”

This “outlook,” or world-view, is developed by Becker-Ho in another work, The Essence of Jargon. “You are not born dangerous-class,” she writes, “you become so the moment you cease to acknowledge the values and constraints of a world from which you have broken free: we are basically referring here to the necessity of wage-labour. This line is one that very precisely separates the working classes from the dangerous classes. [...] The essence of jargon is quite simply the very attitude of mind that informs these “dangerous classes’ every word and deed.”

Overhearers, Informatives, and other Mugs

Again, argot poses a number of threats, not least of which is to challenge the very core of what we think we know about language. Take for example the traditional model of communication, in which a speaker (S) directs an utterance at an addressee (A) along an imaginary conduit: S directed at A. The “conduit metaphor,” as it is called by Michael Reddy, a metaphor that dominates how we think about communication, assumes that the two speakers are standing on the same foundation, on “equal footing,” which is hard to imagine in a society riddled with antagonisms and competing identities.

More importantly, even if we assume the two speakers share some common ground (let’s imagine they’re anarchists), the imaginary “conduit” along which this message passes may not be as secure as the model suggests. The conversation might be subject to interference and distortion--someone may be listening in on the conversation, someone who is hostile to the shared communicative aims of our two comrades.

Linguists use the concept of audience design to examine the ways in which language is influenced by the presence of third-party “informatives.” Distinguishing this approach from the traditional theory, Herbert Clark offers a more inclusive model that accounts for the roles of “side-participants” and “overhearers” in a conversation. Where overhearers are present, the conversation is said to be “informative,” as opposed to the traditional model of S directed at A, which assumes that transparency is both possible and desirable.

Basically, Clark adds a layer of mediation between the speaker and her addressee. This “informative” utterance, he shows, is designed with the presence of intermediary entities, “hostile informatives” (HI), in mind: S directed at HI directed at A. With the addition of the hostile informative, a new element is added to a conversation which had previously been “conducted” by two equal participants. This intervention renders a symmetrical exchange asymmetrical, altering both what is said, and how it is said.

Now, when our two comrades take into consideration the presence of the hostile informative--or, what I would prefer to call, following Becker-Ho, a cop, or a mug (1)--the speakers may adopt one or more of the following strategies: disguisement, indifference, disclosure, and concealment.

Disguisement is the most complex strategy of the four. Disguisement is a kind of ploy, what Clark calls the “disclosure of a misrepresentation.” It communicates essential information to the right people, while leading the hostile informative in the wrong direction. The second, the strategy of indifference, means that the speaker uses the same utterance she would under more intimate conditions, thereby suggesting that the third-party is so unimportant that he doesn’t even warrant attention. Disclosure, on the other hand, involves welcoming the overhearer into the conversation, and providing them with all the information and cues they need to make sense of what is being said: “facilitation.”

Finally, the strategy of concealment. Concealment can be defined as any utterance designed in such a way that it can only be interpreted by insiders. The transmission of military information, such as locations of troops, movements of weapons, and strike patterns is often concealed (or “encrypted”), as is the movement of sensitive commercial information, the electronic transferring of capital from one place to another along insecure channels like the Internet. Subcultures make use of concealment in order to protect themselves from infiltration by and assimilation into a dominant culture. Lovers, too: Juliet could conceal her illicit letters to Romeo by making use of a cipher only they could decode. In short, hostile audiences--those overhearers who attempt to recuperate a message without sharing the communicative aims of its producers--can and should be thwarted by a strategy of concealment.

In Defense of Concealment

The strategy of concealment is the complete opposite of “propaganda,” and it is a profoundly anarchic mode of communication. Aside from the obvious negative benefits of helping speakers to deceive and confuse the authorities, concealment helps to strengthen the bonds of mutualism, especially among informal, “autonomous base nucleus” formations rooted in “affinity and reciprocal knowledge.”

As Clark notes, concealment, argot’s modus operandi, makes special demands on the shared knowledge of both speaker and addressee. Much more than utterances that conform to the rhetoric of transparency, concealment requires speakers to adopt a high degree of empathy with their “audience,” they might draw on a shared memory, for instance, in an attempt to overcome the communicative barriers imposed by the hostile overhearer.

And, because concealment requires conjecture in order to arrive at understanding--unlike, say, the fascistic command, which requires only a passive obedience--it emphasizes collaboration between participants. With concealed utterances, so-called “intelligibility”--which is only superficially and strategically denied--is the result of cooperation. Despite its unfamiliar surface, the concealed utterance, Clark observes, draws heavily on “communal common ground” and often depends upon shared participation in an “intelligence community.”

If this sounds like elitism, a case for an anarchist aristocracy of “those in the know,” perhaps it is--after all, don’t we believe, at some level, that we are better than our enemies? At any rate, I must stress that the parameters of “the community”--and what constitutes its particular “intelligence”--depend entirely on the practices and world-views of those who make it up.

In this respect, there is much to learn from Becker-Ho’s account of the linguistic bonds that unite the dangerous and the dispossessed:

“What comprises dangerous-class nous [“we”] is the continual ability to detect who is on one side of the line or the other, and the behaviour to be adopted in either case. In order to fulfill this aim, a jargon was created whose each and every term reflects...the permanent war that this world of outlaws persecutes against the ‘normal’ world of submissiveness.”

Clark, Herbert H. Arenas of Language Use. Chicago: Chicago UP, 1992.

Reddy, Michael J. “The Conduit Metaphor: A Case of Frame Conflict in our Language about Language.” Metaphor and Thought. Cambridge University Press: Cambridge, 1979.

1. Of “the mug”, Becker-Ho writes in The Essence of jargon: “The mug is the exact opposite of the free individual [l’affranchi] When it comes to being undermined, deceived, and exploited, the mug is in a league of his own, worthy of nothing but contempt on account of everything he has seen fit to accept. He is thus the earmarked victim, which is also how crookdom regards him.”