“The Legend of the Great Dismal Maroons” by James Koehnline

Three years ago, Fifth Estate ran an article on the activities of the two dozen or so privatized armies in Occupied Iraq. The essay claimed that the name of one rent-a-gun company--Blackwater USA--was derived from the term used by the US Navy to describe stealthy, night-time Swift Boat assaults (like the one that former Nebraska Senator Bob Kerrey went on in 1969 when he single-handedly cut the throats of at least twenty women, children, and old men in the small Vietnamese hamlet of Thanh Phong). 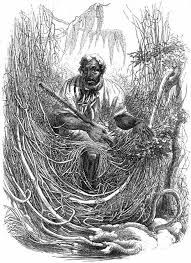 But in looking over Jeremy Scahill’s Blackwater: The Rise of the World’s Most Powerful Mercenary Army (Nation Books: 2007), I learned that the name is rooted in the environment of the Great Dismal Swamp near the corporation’s 7,000-acre headquarters in Moyock, North Carolina: “All the water on the property looked black,” one of the company’s executives said of his first glimpse of the mossy swampland in 1996.

The news that this notorious murder-for-hire “contract security” firm is based on the edge of the Great Dismal Swamp sent me scrambling for my copy of the 1993 Autonomedia/AK Press anthology, Gone to Croatan: Origins of North American Dropout Culture. The collection is a kind of extended commentary on Hakim Bey’s classic TAZ: The Temporary Autonomous Zone, Ontological Anarchy, Poetic Terrorism (Autonomedia: 1991), and one of the works included is a prose-poem called “The Legend of the Great Dismal Maroons: Swamp Rats of the World Unite! A Secret History of the ‘Other America”’ by James Koehnline (who also co-edited the volume with Ron Sakolsky).

About a century and a half ago, the swamp’s dense cedar and cypress wilderness and impassable waterways made it a secret sanctuary for an estimated one thousand runaway slaves and served as a key junction for those fleeing north on the Underground Railroad.

But as envisaged by Koehnline, the Great Dismal Swamp was more than a safe place to hide--it was a multi-racial neutral zone that eluded the feudal political economy of the plantations and the broader ideologies of civilization rooted in patriarchal Christian white settler aggression. The swamp was a constellation of ragtag and bobtail enclaves of exiles, outlaws, ex-slaves, escaped prisoners, hoodoo root-workers, and army deserters living off of the map and below the radar.

Koehnline speculates that these communities took advantage of their marginalized existences (“Who cares who goes there/who goes nowhere?”), rejected the usual infrastructures of social and political control, and experimented with new and intimate alternatives. His utopian riff on the social and cultural history of the swamp excavates the escaped slave (“maroon”) communities there as one of North America’s greatest temporary autonomous zones, but today the presence of Blackwater on the edges of the swamp suggests the very antithesis of Koehnline’s “Great Dismal City of Refuge.”

It is distressing to see the Great Dismal Swamp maroons replaced by cruel mercenaries; clearly, it is now the slave-catcher patrols that occupy the swamps of northeast North Carolina’s coastal plains rather than communes of rebellious runaways. This is a business with an estimated revenue growth of 600 percent in the last four years that enjoys high-powered backing within the US political elite.

Blackwater founder Erik Prince is a violent reactionary evangelical Christian supremacist with close ties to the plutocratic Christian mafia (for example, he is the brother-in-law of ultra-right billionaire Amway scion and failed Michigan gubernatorial candidate Dick DeVos) who serves on the boards of a number of neo-Crusader organizations calling for military attacks on Sudan to rescue persecuted Christians.

Blackwater’s spectacular successes are sure to continue for some time into the future as the State frantically pendulums between its contradictory bipolar objectives of privatizing the Keynesian social welfare safety net into extinction and redoubling its powers of invasive surveillance and militaro-police violence (see Jack Bratich’s very perceptive “Becoming Seattle: The State of Activism and (Re)Activity of the State” in the Winter ’07 issue of Fifth Estate for more on this).

Blackwater is tailor-made precisely for this style of disaster capitalism, whether it’s to create a command-and-control center in Azerbaijan within easy striking distance of Iran without official Pentagon sanction or to deploy heavily-armed mercenaries to “secure” the post-Katrina Gulf Coast under the inept bureaucratic aegis of the Department of Fatherland Security.

In fact, the increased presence of “private contract security forces” in the US may be in the works at this moment: on 9 May 2007, the White House released its “National Security Presidential Directive 51” and “Homeland Security Presidential Directive 20” that “the President shall lead the activities of the Federal Government for ensuring constitutional government” in the event of a very vaguely defined “catastrophic emergency.” Such murky language assures that it will be up to the discretion of the Executive Branch to decide what constitutes a “catastrophic emergency” that will warrant the use of corporate mercenaries and their dizzying roster of innumerable subcontractors. All this is to say that the next earthquake, hurricane, or terrorist strike on US soil will precipitate an extra-Constitutional military occupation by an above-the-law praetorian guard of contract gunmen answerable only to their Oval Office bosses.

Erik Prince likes to call his storm trooper corporation the “FedEx of the national security apparatus”--Blackwater has its own fleet of two dozen air craft (including attack helicopters and surveillance blimps), armored troop carriers, and advanced communications technology. It has opened a second training compound in Mount Carroll, Illinois, and two others have been proposed, one for the tiny rural town of Potrero east of San Diego near the US-Mexico border and the other in the Subic Bay Freeport zone in the Philippines. Two of Black-water’s private aviation firms, Presidential Airways and Aviation Worldwide Services, have been implicated in shuttling prisoners for torture in the CIA’s War on Terror dungeons in Eastern Europe.

As we go to press, US officials in Iraq are trapped in the Green Zone fortress because public outrage over the latest Blackwater massacre is keeping the goon squads temporarily off of the street--apparently, some of the contractors mowed down more than thirty innocents civilians in a recent firefight, including a young couple and their infant child who were shot in the back trying to flee the bloodbath. Prime Minister Nouri al-Maliki furiously demanded the US sever ties with Black-water (good luck with that one, champ!), much in the same way that the Bosnian government in 1999 tried to pressure the US Army to break with the DynCorp mercenary firm when it was revealed that they were in cahoots with the Serbian mafia in a sex-slave enterprise involving young women and children. That atrocity blew over without any change--in fact, DynCorp’s manager of European operations said he was proud of how he turned the war crimes his corporation committed into “a marketing success.” Likewise, Blackwater’s mass murder operation of September 16th will fade into a half-forgotten foofaraw and blow over without any change in mercenary contracts.

To find another entity as loathsome as the Blackwater’s brothel of war whores in the long, complex history of the Great Dismal Swamp ecosystem, you’d have to go back to the late 1700s when George Washington, Thomas Jefferson, Patrick Henry, Henry “Lighthorse Harry” Lee, and other like-minded Founding Father plantation gentry participated in a handful of land-speculation syndicates such as the “Adventurers for Draining the Great Dismal Swamp.”

Washington’s job on behalf of the investors was to round up the slaves for this impossible land-clearing project, and he was said to have failed in this odious task by assembling “the worst collection that was ever made--they seemed to be the refuse of every one of the estates from whence they were sent.” Ultimately, the Adventurers for Draining the Great Dismal Swamp failed wretchedly in their efforts, and we look forward to the murderous adventurers of Blackwater painfully suffering the same fate.

“The Legend of the Great Dismal Maroons” by James Koehnline

Today the descendants of the Maroons are still with us,

some still living in the cracks,

many more have blended into the crowds of the nameless.

You may be one, in blood, or spirit, or both.

Search the dark, rough recesses of your heart and mind.

See if you can find traces of that Other America,

the one that did not build its celestial city on a foundation of cruelty, murder and deceit, but gathered the exiles of four continents

in its Great Dismal City of Refugee.

Illustration above: “Osman (An illustration of a maroon in the Great Dismal Swamp),” by David Hunter Strother, from Harper’s New Monthly Magazine, September 1856