It was a full scale beggar’s banquet, the return of the repressed, a surprise party. The city people, young and old, black and white, went through the pawnshop windows like meteorites. Nervous exorcists, trembling before a mortal turned evil and massive and enigmatic, the politicians asked, “Who are you?” And like demons unleashed from an inferno, they answered, “Many.” 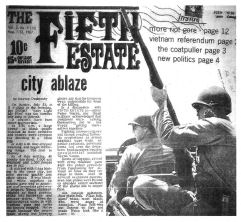 How it burned! Ferocious and manificient, in the conjured-up, premature, arsonist dawn. It was a small moment of truth: the plundered became the plunderers. Booze ran in the streets from the shattered liquor stores. Then the blood ran. The cops and the troops began their grim retaking of the city. Fifty caliber wasps swarmed against the apartment buildings, cutting through the brick effortlessly. Tanya Blanding, four years old, was dragged away in the bullets’ undertow, a touch of Vietnam for the folks at home. John Leroy, gunned down at a roadblock, lay on a pavement in a spreading tarpaulin of his own blood. There was a shortage of snipers.

Today Detroit, feeble, decaying, sinks deeper into the vortex. More black politicians, now, and more black cops. Counterinsurgency has done its job. But the burden is heavier, the air thicker, the despair more giddy. The “riots,” we are told, were a “tragedy.” And they certainly were for the people murdered and maimed by the state. But the real tragedy is that the riots didn’t spread, that they didn’t deepen into full scale, conscious revolt. The tragedy is that since then, the real theft--of bread and dreams--has continued.

It was a binge, a saturnalia, a world turned momentarily upside down. It was a tremor, coming from deep recesses that some would prefer to wish away, to buy away, to machine-gun away. But it’s still there, a shifting tectonic magma, rumbling, creaking, pressure building, and it won’t go away.

Detroit always does things in a big way.

The destruction, looting, killing, and violence have been chronicled to such an extent that no repetition is necessary here.

This newspaper has concentrated its observations on the hippie, new left, and avant garde community it serves.

The geographical center of that community--the Warren Forest area near Wayne University--was relatively untouched by the holocaust.

The Fifth Estate office at Warren and John Lodge was unharmed as were the adjacent offices of the Artists’ Workshop, Trans-Love Energie6 and the Detroit Committee to End the War in Vietnam. Our newspaper office sported a “soul brother” sign and two larger” banners were hung from Trans-Love, reading “Peace on Earth” and “Burn, Baby, Burn.”

Hippie and political residents of the Warren Forest area reacted to the situation just like their poorer neighbors--they took whatever wasn’t nailed down.

They joined the Negros and Southern whites in cleaning out the stores on Trumbull and Forest, which now lie in ashes, the Krogers on Second and Prentis and other stores. Looters came back laden with goodies, swapping stories of harrowing experiences with the guardsmen and bartering goods that they had in excess. The mayor was certainly right about the “carnival atmosphere.” Everything was FREE.

Kae Halonen, a resident of W. Hancock, described the scene as that of integrated looting. “There was complete cooperation between the races in their common endeavor,” she said. “There were children carrying toys they never would have been able to afford.”

Detroit’s Communications Company, which distributes leaflets in the area put out a broadside that advertised “Detroit Summer Plunder Festival” and advised residents to “Get the Big Stuff” and “Loot--it’s the American Way.” One hippie was reported to have unlocked an abandoned gas station and was pumping free gasoline to anyone who came along.

When asked if looting was not contrary to the hippie philosophy of love, John Sinclair, head of Trans-Love and Fifth Estate staffer replied, “We told the merchants before the riot they should give everything away, but they wouldn’t listen.”

“It’s a little out of hand, but it’s beautiful,” said one hippie. “It looks like Rome burning,” said another as he observed the city in flames from a roof top.