Anarchist Albert Cossery’s books are the most irreverent that I’ve ever read, ridiculing those in power, the police, the wealthy, and the stupidities of our industrial society. Everything our puritanical society deems important--material wealth, ambition, proper conduct, hard work, university degrees, progress--is ridiculed in his novels, most of which are set in Arab countries (especially Egypt). He mocks bourgeois materialism, consumerism, and productivity while reserving his sympathies for the lowlife: street-corner layabouts, hashish dealers, petty thieves, beggars, confidence tricksters (“shuttar” in Arabic), and bandits. 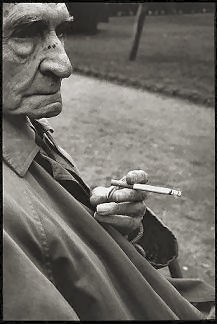 His main characters’ goals in life are the pursuit of happiness; they have no ambition other than procuring amusement from observing the actions of those around them, and experiencing pleasure. Working is abhorred, and, of course, they are often suspected by the authorities of subversion. (Apparently this anti-work sensibility is a trait shared by the author himself: when an interviewer asked Cossery why he had only produced eight novels in sixty years, he proclaimed that laziness was a virtuous form of meditation and contemplation.)

Albert Cossery, born on November 3, 1913 in Cairo into a wealthy family received the education of those in his social class, going to a French school and thus becoming familiar with French literature and writing in French. During World War II in British-occupied Cairo, he fell in with Jama’at al-Fann wa’al-Hurriyah, a group of European anti-fascist exiles and Arabic surrealists that experimented with modern ideas and creative methods. But in interesting ways, his novels also tap into a long-standing tradition in classical Arabic literature centering around cunning vagabonds and conniving gate-crashers, except Cossery gives them a contemporary anarchist twist. For example, Cossery’s fifth novel, La violence et la derision (1965), details a series of bold, seditious pranks made by a laidback revolutionary pacifist against a brutal dictatorial regime; a reviewer for the Parisian journal Anarchisme et non-violence applauded the book for its meditations on “the human qualities that we hold dear: a sense of irony, nonconformism, a taste of freedom, and a love of life.”

In 1940, Henry Miller helped him publish his first work in English, a collection of short stories entitled Men Forgotten By God. Two of his excellent novels, The Lazy Ones (1952) and Proud Beggars (1981) are also available in English. It’s unfortunate that only two of Cossery’s novels have been translated into English, and I’ve been told that they’re expensive--hopefully public and university libraries carry them. People who can read a language other than English will probably be able to find all of Cossery’s works; the anarchist bookstore in Montreal, L’Insoumise, carries all of Cossery’s books in French. The bookstore can be contacted at anarchistefestival--at--yahoo--dot--ca or by regular mail by writing to my attention at Fifth Estate.