Jacques Vaché and the Roots of Surrealism
Book review

In early January 1919, a twenty-four year-old army translator named Jacques Vaché was found dead in a hotel room after a long weekend of partying. Not much is known about him--he was born in France to a French father and British mother, spent some time as a child in French Indochina, was drafted into the army as a translator when the First World War began in 1914, suffered a shrapnel wound in 1916, and that he smoked a fatal dose of opium about six weeks after the war was over. All that remains of his works are a couple of book reviews from a pre-war ‘zine he published with friends, about a hundred letters to friends and family from the battlefield, some experimental writings, and assorted drawings and doodles. Yet somehow Vaché, “a master of the art of attaching very little importance to everything,” has emerged to become a critical missing link between the most revolutionary cultural currents of late Symbolism, dada, and surrealism in early twentieth-century Europe. 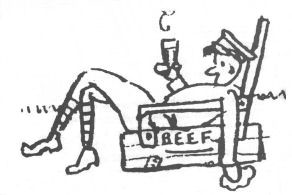 “Nothing kills a man like the obligation to represent a country.” (Drawing by Jacques Vaché)

Anyone with strong interests in dada or surrealism needs to chew on what this book has to offer because of its implications on how the histories of those movements have been told until now. But as mapped out by poet and radical labor historian Franklin Rosemont, Vaché’s story is one that goes well beyond the historiographic squabbles of specialists. Like Rosemont’s Joe Hill: The IWW & the Makings of a Revolutionary Working-class Counterculture (2003), Jacques Vaché and the Roots of Surrealism is the delirious antithesis of the “definitive” biography crafted by some “just-the-facts, ma’am” tenured academic grind. Instead, Rosemont’s book is a wildly speculative and thoroughly entertaining free-association exploration of brilliantly dangerous ideas, the textual equivalent of some wonderfully strange late-night cab ride with a wryly philosophical taxi driver who insists on turning off the meter and taking you home along the scenic route. This is not to say that Rosemont’s research is sloppy--on the contrary, as in the Joe Hill book, he thoroughly exhausts all previous studies and diligently combs through primary sources with a cryptographic intensity. But Rosemont draws blood from the stones by paying the most attention to the things that no one will ever know about Vaché, the “interruptions, distractions, and gaps in Vaché’s hectic and even incoherent life,” as he says in the introduction.

As Rosemont argues, there’s an eloquent, elegant rationale to Vaché’s incoherence (the surrealist poet André Breton called it “diligent disservice”) that continues to appeal to rebels and resisters among us today, especially in resistance to the nonstop noises of war and the State. During the worst moments of combat, Vaché the conscripted soldier effortlessly ignored the war effort by maintaining what he himself described as a “comatose apathy,” a “total indifference and a quiet lack of seriousness with which I like to adorn very official matters.” For example, while drifting between work with the French, British, Australian, and US armies, Vaché collected cast-offs from a variety of uniforms from a variety of armed services branches and a variety of ranks, including those of opposing forces. From these rags he fashioned a dandy’s disguise that subverted the singular function of the uniform (identification) by hand-making an outfit that obscured rank, branch, job and even a general allegiance to either the Allies or the Central Powers (Situationist Guy Debord saw Vaché’s drag show as a “psychogeographical” statement; Rosemont amusingly calls it “trick-or-treat treason”).

“I object to being killed in wartime,” he wrote simply in a letter to his friend Breton, moving him to later describe Vaché as a “deserter from within,” a consummately uninterested observer grounded in a profound “refusal to participate”; in 1940, the Egyptian surrealist poet Georges Henein said that Vaché was “the coolest and most elegant’ a the terrorist of the new persuasion.” Rosemont’s tenacious discoveries of the implications of Vaché’s creatively -corrosive insubordination demonstrates how, “by subverting not only the dominant paradigm, but other would-be dominant paradigms as well, Vaché’s joyful monkeywrenching--in the fields of poetry, art, philosophy, and in daily life, above all--aids and abets the advance of marvelous anarchy.”

Throughout his study, Rosemont anchors his conjectures in Vaché’s theory and practice of “Umour” (the British spelling of “humor” without the “h”). Umour was the fallout from the mindless carnage, senseless waste, and ugly ironies of daily industrialized slaughter during the First World War; in a letter to Breton from an unidentified “ex-village” on the Western Front, Vaché explained Umour as “the sensation (I almost said ‘sense’) of the theatrical and joyless uselessness of everything.” But that simple definition does nothing to capture the full potential of the energy and spirit of this radically absurdist despair and subversively mordant gallows humor, especially when the exigencies of wartime national security demanded that ignorant optimism, religious blind faith, and mawkish allegiance to the nation was the compulsory civic duty of every loyal citizen-patriot. But as Rosemont’s monograph insists, Umourous unruliness and scorn is a tool and a weapon that sabotages the singularly stupefying assembly lines of work, war, and homeland regardless of the particularities of any one country, war, or time period.