Anarchist Alexander Berkman was sentenced to serve twenty-two years in prison for his attempt to shoot robber-baron Henry Clay Frick during the Homestead miners’ strike. While in prison, a plot was hatched to break him out. Who was the key figure involved in Berkman’s attempted prison escape? 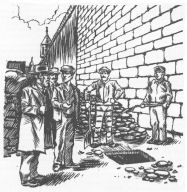 Those who know about Alexander Berkman and Emma Goldman are familiar with the story of Berkman’s ill-fated attempt to escape from Pennsylvania’s Western Penitentiary in the summer of 1900. [1] Although Berkman conceived of the escape plan when he learned of an almost forgotten underground passage beneath the prison yard from an older inmate, implementation of the plan to tunnel out of the prison did not begin until a prisoner known to history only as “Tony” was released late in 1899. Berkman and Tony had developed a secret code so that Berkman could communicate with the team of anarchist comrades (recruited from around the country and including Eric B. Morton and Vella Kinsella) who dug a tunnel from a house on Sterling Street in Wood Run, PA (now part of Pittsburgh), which was adjacent to the prison, under the western wall and into the prison yard. The digging took several months and was a masterpiece of engineering. Kinsella, a musician from Chicago, played tunes on her piano to ensure that the sounds of the tunnelers would not be heard by neighbors or prison guards. During construction of the tunnel, Tony was the only member of the group who could communicate with Berkman, and later accounts of the escape attempt suggest that Tony assumed a leadership role that Berkman and the co-conspirators found counter-productive and frustrating. The anarchists completed the tunnel in mid-July 1900, but unfortunately for Berkman, bricks intended for a construction project inside the prison were dumped on the terminus of the tunnel in the prison yard, and he was not able to access the tunnel. Later that month, the tunnel was discovered, and all hope for Berkman’s escape evaporated.

At the time, neither the prison authorities nor the police conclusively determined who built the tunnel or for whom the tunnel was intended (although Berkman was punished with a stint in solitary confinement). The facts of the escape attempt were later disclosed by Berkman in Prison Memoirs of an Anarchist and by Emma Goldman in Living My Life. However, neither Berkman nor Goldman ever disclosed the identity of the mysterious “Tony,” nor have subsequent researchers ascertained his identity. It has remained an enduring mystery. [2]

The most recent scholarship on Emma Goldman, Candace Falk and company’s multi-volume collection of Goldman’s papers sheds no additional light on the mystery. The authors credit Paul Avrich for providing information indicating that Tony was a “German anarchist.” [3] It is surprising to see Professor Avrich credited for this information since it is common knowledge that Tony was of German origin--Berkman himself wrote that Tony was an Alsatian. Nothing new there, so why the credit?

What Professor Avrich did not disclose, or perhaps didn’t know, is that Tony’s name was Charles Snyder. Western Penitentiary prisoner number A985, Charles Snyder was arrested in 1894 for sodomy. [4] He was confined to the penitentiary on December 15, 1894, at age 31, and was released on November 22, 1899, at age 36. During his stay in Western Pen, he worked in the mat shop. At the time of intake into Riverside (as the prison was also known), he was described by prison officials as 5 feet 8 inches tall, 152 pounds, with a dark complexion, raven black hair, and “mar pure” eyes. His physical and mental condition was described as “good.” He claimed that he had attended public school in Germany until the age of 21, and indeed, he could read and write. He also claimed that both of his parents were still alive when he was age 16; he was not naturalized and was unapprenticed, listing his occupation as “butcher.” He was described as an “occasionally intemperate” drinker who never married or served in the armed forces.

Although he originally hailed from Baden, Germany, at the time of his incarceration he had lived in Pennsylvania for eight years. My research suggests that, although prison officials listed him as a butcher, Snyder has a somewhat more varied occupational history. Pittsburgh city directories show that in 1892, Charles Snyder was a principal in a candy manufacturing and retail business called Dohrman & Snyder (listed in the 1891 directory as Dohrmann & Schneider), which was located at 264 Ohio Street in Allegheny City. This address was in the heart of the German community in Allegheny City, which included many anarchists, including Carl Nold and Henry Bauer. (Indeed, the largest-selling German language newspaper in western Pennsylvania, the Sonntagsbote Sonntagsblatt, and Reform--“the paper read by intelligent working men”--was published just down the street at 212 Ohio Street.) Charles Snyder’s residential address is listed as 92 Spring Garden Street (7th Ward) in Allegheny City. [5] This address is across the street and a few doors down (away from “downtown” Allegheny City) from 73 Spring Garden Street, where Henry Bauer lived in 1892, along with fellow anarchist and shoemaker Maxwell Albrecht. It is only a short distance from 5 Cherry Alley, the boardinghouse owned by anarchist Paul Eckert where Carl Nold lived. Previously, Joseph Fricke, a local anarchist “leader” whom Bauer was supposed to have succeeded upon Fricke’s suicide, lived in this neighborhood. (Fricke is most notable as a host of and delegate to the 1883 Pittsburgh Congress, from which issued the famous Pittsburgh Manifesto.)

It appears that Dohrmann and Snyder dissolved their business partnership in 1892, because while Louis Dohrman is listed as a candy-maker in the 1893 City Directory, Dohrman & Snyder no longer appears, and the Charles Snyder listed at 92 Spring Garden Street is identified as a peddler. Dohrman apparently moved his candy-making business to 508 Wood Street in downtown Pittsburgh and moved his residence further away from downtown Allegheny City to City View in Reserve Township. [6] (Police alleged that anarchists from the Spring Garden/Allegheny City neighborhood would follow Spring Garden Street northwest out of town to Reserve Township to hold nighttime political meetings, thereby avoiding the surveillance of the city police.) Charles Snyder disappears from the 1894 City Directory (even though he wasn’t arrested until December 11, 1894), but interestingly, Charles Schneider, a laborer/bricklayer who lived at 82 Hill Street in Allegheny City’s 12th Ward, first appears in the directories in 1895 and continues to appear in the 1896 directory. Of course, Charles Schneider was the contact person for the Berkman Defense Fund referenced several times in volume one of the Emma Goldman Papers series.

Is there a connection between Charles Snyder and Charles Schneider? That’s a good research question. My speculation is that they were the same person. Berkman remarks in one of his sub rosa notes quoted in the Prison Memoirs that it was fortunate that the prison authorities did not know Tony’s real identity; otherwise, he would be under special surveillance. it is possible that the authorities did not realize that the prisoner Charles Snyder was Berkman Defense Fund member Charles Schneider. [7] Moreover, Hill Street is near the Spring Garden neighborhood where Henry Bauer and Charles Snyder lived, and Hill Street actually intersected with Spring Garden Street just a bit further west of 92 Spring Garden. It therefore appears that Charles Snyder a.k.a. Schneider moved from 92 Spring Garden Street to 82 Hill Street sometime in 1894 and operated the defense fund from the Hill Street address until his imprisonment. [8] That Schneider’s listing in the city directories continued through 1896 (even though Snyder was arrested in December 1894) may have been just a result of slow-moving updates on the part of the directories’ publishers, or perhaps the Defense Fund continued to use the name and address for a time after Snyder was imprisoned--for their protection as well as his.

Further research on Charles Snyder may yield additional information, not only about Berkman’s attempted escape but also about the anarchist community in Pittsburgh and possibly about links between anarchists in Germany and the United States. For the moment, we will have to be satisfied that the mystery of Tony’s identity has been solved.

Related: see “Some Thoughts on Alexander Berkman’s Prison Memoirs of an Anarchist by an Imprisoned Anarchist” by Marius Mason, FE #398, Summer 2017.

[2] As, have the identities of other members of the escape team. It seems unlikely that Eric and “Tony” could have dug the tunnel by themselves, but no mention has ever been made of other diggers. Carl Nold is one possibility

[4] Sodomy, of course, in the 1890s was a word used to describe various “unnatural” sexual behaviors and did not necessarily mean homosexual acts. The “News of the Courts” section of the Pittsburgh Chronicle Telegraph of December 14, 1894, indicates that Charles Snyder was sent to the penitentiary that day for six years for “an unnatural crime.” The Allegheny County Jail Daily Register is a bit more descriptive, however, and indicates that Charles Snyder, a butcher from Germany, was incarcerated for “Sodomy & Buggery.” While either term can mean sex with an animal or certain heterosexual sex acts, they generally refer to homosexual practices; in particular, anal sex. Among the male-dominated immigrant working population of the 1890s, such behavior was not unusual, nor was it as severely stigmatized as it was among other populations. (See, e.g., Eric Rauchway’s discussion of this topic in his 2003 book Killing McKinley.) Still, the cause of Snyder’s arrest and his possible homosexuality are intriguing, especially considering that he and Berkman became comrades in prison, where homosexual relationships, or at least nonphysical feelings of love between male prisoners, were not uncommon. (See Berkman’s discussion in Prison Memoirs.) One also wonders how, if Tony were a homosexual, that circumstance may have affected his relations with the tunnel conspirators, which were evidently not always harmonious.

[5] There are numerous Charles Snyders, Charles Schneiders, and Charles Schniders listed in the city directories for the 1890s. The Charles Snyder who lived at 92 Spring Garden Street first appears in the 1892 directory It is possible that he lived in Pittsburgh prior to 1892, and it appears that he did live in Pittsburgh in 1891, when Dohrman & Schneider first appears in the directories. However, due to his common name, it is impossible to trace his previous addresses without additional information.

[6] Interestingly, the 1894 City Directory gives 508–512 Wood Street as the address for Reymer & Bros., wholesale confectioners. It thus appears that Dohrman not only moved his candy manufacturing business to downtown Pittsburgh, but also began some sort of commercial relationship with Reymer & Bros.

[7] Of course, we know from the candy manufacturing enterprise--Dohrman & Snyder a.k.a. Dohrmann & Schneider--that Charles Snyder sometimes used the Anglicized form of his name “Snyder” and sometimes used the German form “Schneider.” This lends more weight to the theory that Snyder and Schneider were the same person.

[8] Intriguingly, a Charles Schneider, also described as a laborer, briefly appears for one year only in the 1894 City Directory at 92 High St. in the 7th Ward (adjacent to the 12th Ward) in Allegheny City. I cannot however, confirm that Snyder a.k.a Schneider moved from 92 Spring Garden to High Street in 1894 and then to Hill Street in 1895, although it is possible. Due to the common nature of the name Charles Snyder (Schneider), one can find residents with that name at almost any time in the city directories (e.g., even in 1889 there appears a Charles Schneider, a laborer, at 24 Troy Hill Road in Allegheny City, which is not far from the Spring Garden neighborhood in the 12th Ward where Bauer and Snyder lived). It is the proximity of Charles Snyder’s residence at 92 Spring Garden Street to Henry Bauer’s residence at 73 Spring Garden, as well as to the Hill Street address, that suggests the link between Charles Snyder a.k.a. Charles Schneider and the Allegheny City anarchist community.