Editorial
Money: Root of all Evil

As several people who have seen this issue prior to publication have noted, the correct quote is “The love of money is the root of all evil,” but its truncated form seems more accurate than the original. Money itself, not just cherishing it, is the ultimate representation of all that is alienated in the modern world; the driving force of pathological greed; the whip that coerces wage labor; and the basis of wars. The current inequitable split of the planet’s wealth now allows ten million millionaires world-wide to control $37.2 trillion dollars in financial assets assuring a life of immiseration for billions of people. 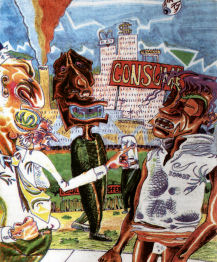 However, the answer doesn’t lie in divvying up more fairly the loot squeezed out of human labor, the earth and its creatures, but rather in an end to the entire economic system that capitalizes and marks all activity, as objects with a value. Much of what this entails comes under the discussion of that which is designated in econo-speak as The Law of Value, but at its simplest, the concept is contained in the John Lennon song, “Imagine,”

“Imagine no possessions I wonder if you can

No need for greed or hunger

That said, the irony isn’t lost on us of publishing an issue critiquing money, and then asking for it. We realize that money drives our lives and even our anarchist projects, but hopefully much less so than those who covet wealth. Still, our need for it to produce this paper is no less than that of a commercial enterprise. As we go to press, we are $1,500 short of what we need to pay our printer. If your subscription is expiring, you’ll soon receive a renewal notice; we hope you’ll keep supporting the radical media movement by renewing and, if possible, adding a donation and a contribution to our prisoner/GI fund. If you’re buying this at a newsstand, please know that we benefit substantially less than if you subscribe. Become a Sustainer who takes a yearly role in assuring our survival. See page 50. Or, sponsor a benefit as people have done recently at venues around the country.

Since editorship and production of the Fifth Estate rotates around the country, readers have told us they’d like to know where each of them is produced; this one is back to the city of origin of this publication: Detroit.

The Fifth Estate is a cooperative, non-profit, anti-authoritarian project published since 1965 by a volunteer collective of friends and comrades. We are committed to non-dogmatic, action-oriented writing and activity to bring about a new world.

As opposed to professionals who publish to secure wages, or those who invest in the media information industry, we produce this magazine as an expression of our resistance to an unjust and destructive society. No copyright. No paid staff. No ads.