Getting Off Easy
Men & Pornography!

Getting Off: Pornography and the End of Masculinity, Robert Jensen, South End Press, 2007, 197 pages

It is hard to read Robert Jensen’s Getting Off without getting drawn into an internal debate about power and desire and without feeling that there is a greater economic issue that the author, a journalism prof at the University of Texas at Austin, has left essentially untouched. 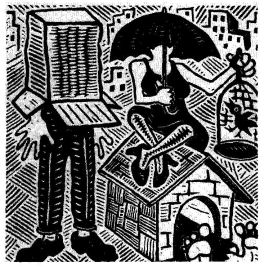 Our late friend, Richard Mock, often said his iinocuts were ambiguous enough that they could accompany almost any article, or certainly stand alone. The one above seems like a perfect example.

But Getting Off is not a follow-the-money book. It is about personal choices, social activism, and in many ways about personal confessions. In this sense, it is an alienating read and only a step in the right direction in talking about the issue of misogyny.

Jensen focuses on the increase in production of gonzo porn; that category in which extreme or degrading acts are the central images. Kind of like the “Jackass” version of dirty movies. The book makes its case against pornography through graphically described scenes of irrefutable exploitation and in some cases physical pain. There are, in fact, far too many graphically recounted scenes for the reader to consume (did he really watch all of these?), plus, there is a certain degree of self-righteousness in presenting this to the reader; a sense that we will be in denial or even complicit if we skip a page.

Perhaps the greatest value of the text is Jensen’s appeal for men to join the fight against toxic masculinity and in the power of the book’s final statement: “I choose to renounce being a man; I choose to struggle to be a human being.” For both men and women it is indeed a struggle to be more than the sum of our bodies and our socialized compulsions, but his implorations seem to offer little to hang a hat on.

Jensen says he doesn’t want government censorship, but dependence upon calling for individual ethical will for avoidance of a compelling genre doesn’t seem very powerful. And, he really doesn’t make his case.

Also, Jensen discusses quite disarmingly his own obsession with pornography, so is this a case of a recovering addict demanding that no one else be tempted by what got him hooked and feeling guilty?

So, what do we do about porn, or, for that matter, should we do anything? There’s probably nothing currently that can erode the mass appeal it has to men in a society drenched in sexual anxiety. Not paying for it and enriching the entrepreneurs who profit from our lust and/or sexual misery is a good starting point, but catching yourself watching is no reason to induce another level of guilt or shame. However, if you find yourself attracted to the pretty awful material Jensen describes, and he was obsessed with, it might be worth asking yourself why. A little self-analysis never hurt anyone.