The Living Theatre made anarchist pacifism secular and sexy 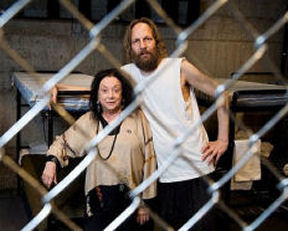 Because art breathes on in the legacy left with the living, death cannot defeat an artist. In this eternity of the permanent present, poems and plays and songs resist the tyranny of death. While this recognition hardly dulls the sting of mortality in the hearts of the bereaved when we lose a loved one, its message rings clearly today as we celebrate the life of the late Hanon Reznikov.

When Judith Malina and Julian Beck co-founded the anarcho-pacifist Living Theatre in the late 1940s, Hanon Reznik had not yet been born. When Hanon first saw The Living Theatre perform the politically, spiritually, and aesthetically extravagant Paradise Now, he was an 18-year-old Yale freshman majoring in molecular biophysics. Not too long after seeing the performance, Hanon left science for drama, and after Yale, was living in New Haven, Conn. directing plays at the Long Wharf Theatre.

When Beck’s poetic journal-as-manifesto, The Life of the Theatre, was published by Lawrence Ferlinghetti’s City Lights Books in 1972, Hanon read it before going to hear Judith and Julian give a talk in Hartford. A month after meeting Judith and Julian there, Hanon (who later changed his name to Reznikov, his family’s name when they first came to America) joined them in Brooklyn where he and Judith became lovers.

Although Hanon was half Judith’s age and the same age as his future stepson, Garrick Beck, (active in starting the Rainbow Family annual gatherings), their love challenged and transcended boundaries. Hanon identified as pansexual and was lovers with Julian as well, although Hanon said that being lovers with the two could not be sustained. Around that time, Hanon’s creative collaboration with The Living Theatre began; it would last more than 35 years.

During the early to mid 1980s, as Julian battled cancer and faced death, he remained fiercely creative to the end, speaking fresh poems for Hanon to transcribe right up until falling into a coma. Before Julian died in September 1985, he asked Hanon to protect Judith. Immediately after Julian’s passing, Hanon joined Judith as co-director of The Living Theatre, and the lovers were married in 1988.

Hanon helped create a new mission statement for the collective, written in the poetic voice that has long defined the group’s efforts. That beatitude of barbed-wire eloquence remains the project’s anchoring statement. It’s hard to imagine The Living Theatre lasting as loudly and proudly as it has into the present without Hanon’s loving, passionate, and exuberant stewardship.

Julian Beck had already died when I discovered his work in the late 1980s, and I would only later learn more about Judith and Hanon. I stumbled onto Beck’s “Notes toward a Statement on Anarchism and Theatre” and later devoured The Life of the Theatre as part of my radical poetic catechism.

Etching an enduring concept into the communal psyche, The Living Theatre forged the philosophy of the “Beautiful Nonviolent Anarchist Revolution.” Part mantra, part slogan, and an entirely lived praxis, this template weds the ecstatic and aesthetic to the transformation of society. Still an attractive and dangerous insight, attaching beauty and nonviolence to the incendiary notion of anarchist revolution insures that insurgent tactics be grounded in love and compassion.

For decades, anarchist pacifism has brought with it the aura of ascetic purity--of Tolstoy, Gandhi, or the Catholic Workers. To some, this scent of morality mingles too closely with authority, whether that of religious leadership, institutional protocol, or of a prescriptive edict.

The Living Theatre made anarchist pacifism secular and sexy

With its unique and unwavering politics rooted in Paradise Now, The Living Theatre made anarchist pacifism secular and sexy--but never soft. For decades, the members have marched alongside--and distinguished themselves from activists for whom pacifism is a safe extension of liberalism or for whom anarchism necessitates violent resistance.

Appropriately, my first face-to-face encounter with Hanon and Judith came in late August 2004 in New York City, as the collective prepared its creative contribution to the mass demonstration against the re-nomination of George Bush at the Republican National Convention. In keeping with everything we’d learned about The Living Theatre, my partner and I joined them as participants rather than spectators, to perform in the streets rather than on a stage. As important as that day was for me, finally meeting and marching with those I’d studied and admired for so long, its active expression of an ideal was for the collective just one point on an impressive, six decade continuum of combining peace and anarchy, art and life, love and resistance.

When Paradise Now introduced Hanon to The Living Theatre 40 years ago, he remarked, “I was very turned on by it; I found it very sexy. My sense of the event of Paradise Now was one of extraordinary freedom, and it seemed like the world was just beginning to figure out how free it could be.”

With Judith and Julian, Hanon took the troupe’s anarchist and pacifist ideals quite seriously.

He expounded, “The aspect of theater that makes it particularly interesting to us as political activists is the way the theater exists as a social model.”

While hundreds of revolutionaries have dedicated their entire lives to resistance through direct action and numerous artists have sought liberty through creative expression, few have led such a dedicated pursuit of both simultaneously--not just in theory but in daily practice.

In the last several years, in addition to traveling and performing all over the world, Hanon had been active with Judith in securing a home for The Living Theatre on Clinton Street in New York City’s Lower East Side.

Just last spring, Judith and Hanon appeared on Harold Channer’s talk show on the public access Manhattan Neighborhood Network, celebrating the new space, the collective’s 60th anniversary, and Judith’s 80th birthday. In this clip available on YouTube, Hanon describes it as “a special time,” and with Judith, speaks quite lucidly about art and anarchy and enthusiastically about the end of poverty and the end of war.

Approximately a year after this broadcast, with the work of The Living Theatre going strong in its new home base, Hanon suffered a massive stroke, followed by pneumonia. Just two days after protesters and revelers all over the world honored the anarchist and pagan festival of Mayday, Hanon died in Manhattan.

Still seeking wisdom and solace, I found my hard-bound, two-dimensional version of the collective’s most visionary moment. Written down by Judith and Julian some six months and 50 performances into it, the text for Paradise Now combines a collaborative narrative on revolution with readings from the I-Ching and teachings from Kabbalistic, Tantric, and Hasidic sources. From the Hasidic insights, I found the words I imagine Hanon would want on our lips at this time:

“Man is always passing through two doors: out of this world and into the next, and out and in again. When people are merry and dance, it sometimes happens that they catch hold of someone, who is sitting outside and grieving, pull him into the round, and make him rejoice with them. The same happens in the heart of one who rejoices: grief and sorrow draw away from him, but it is a special virtue to pursue them with courage and to draw grief into gladness, so that all the strength of sorrow may be transformed into joy.”

May those who grieve losing Hanon transform their tears like this: into comfort for Judith and the collective; into preserving, promoting, and passing along the mission of The Living Theatre; into becoming the joy that always comes with the promise of revolution.