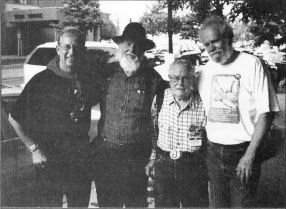 The IWW and the labor movement lose a troubadour Utah Phillips, a seminal figure in American folk music, who performed tirelessly on two continents for 38 years, died May 23 of congestive heart failure in Nevada City, California, a small town in the Sierra Nevada mountains where he lived for the last 21 years with his wife, Joanna Robinson, a freelance editor. Phillips died at home, in bed, in his sleep, next to his wife.

Born Bruce Duncan Phillips on May 15, 1935 in Cleveland, he was the son of labor organizers. Whether through this early influence or an early life that was not always tranquil or easy, by his twenties, Phillips demonstrated a lifelong concern with the living conditions of working people. He was a proud member of the Industrial Workers of the World (IWW), an organizational artifact of early twentieth-century labor struggles that has seen renewed interest and growth in membership in the last decade, not in small part due to his efforts to popularize it.

Phillips served as an Army private during the Korean War, an experience he would later refer to as the turning point of his life. Deeply affected by the devastation and human misery he had witnessed, upon his return to the United States he began drifting, riding freight trains around the country. Destitute and drinking, Phillips got off a freight train in Salt Lake City and wound up at the Joe Hill House, a homeless shelter operated by anarchist Ammon Hennacy, a member of the Catholic Worker movement and associate of Dorothy Day.

In the creation of his performing persona and work, Phillips drew from influences as diverse as Borscht Belt comedian Myron Cohen, folksingers Woody Guthrie and Pete Seeger, and country stars Hank Williams and T. Texas Tyler. Over the span of the nearly four decades that followed, Phillips worked in what he referred to as “the Trade,” developing an audience of hundreds of thousands and performing in large and small cities throughout North America, and Europe. His performing partners included Rosalie Sorrels, Kate Wolf, John McCutcheon, and Ani DiFranco.

His extensive writing and recording career included two albums with DiFranco which earned a Grammy nomination. Phillips’s songs were performed and recorded by Emmylou Harris, Waylon Jennings, Joan Baez, Tom Waits, Joe Ely and others. He was awarded a Lifetime Achievement Award by the Folk Alliance in 1997.

Utah began suffering from the effects of chronic heart disease in 2004, and as his illness kept him off the road at times, he started a nationally syndicated folk-music radio show, “Loafer’s Glory” on KVMR-FM.

Recalling his days on the road, he started a homeless shelter in his rural county, where down-on-their-luck men and women were sleeping under the manzanita brush at the edge of town. Hospitality House opened in 2005 and houses 25 to 30 guests a night.